How to sync bookmarks between Firefox, Chrome, and Safari on multiple computers?

There are some similar question on bookmark syncing, but most answers point to Delicious or Google bookmarks. However, as Chrome doesn't have the Google toolbar, how would those sync? I use several computers and different browsers on them so I would like a easy solution to keep all of the bookmarks in sync on various computers and browsers in the same organizational structure throughout.

Also, I would prefer to have my bookmarks only synced to my account, not necessarily visible to the whole world as on Delicious. Is there any service that could handle this?

Xmarks (formerly FoxMarks) could solve your problem. It can synchronize (privately) bookmarks from Firefox, Safari, and Internet Explorer.

EDIT: Lifehacker has an update on Chrome supporting bookmark sync

EDIT: As of May 1st 2018, Xmarks has been shut down by its parent company, LastPass.

Chrome does have an extension for Xmarks (formerly FoxMarks) now. I just installed it today, and it works beautifully. I had already had an account set up through both Internet Explorer and Firefox, but I recently had switched to Chrome. I was not looking forward to having to find another online synchronization program.

For 2012, XMarks came back from the grave as part of LastPass. It supports 4 of 5 major browsers (IE, Firefox, Chrome, Safari) but lacks Opera. It's not clear whether this is due to Opera API issues, but there is a little discussion in their forums. Looks like it's free, but you have to subscribe for use with mobile devices/tablets (iDevice, Android, etc.) and a few other features. This is the same strategy used by LastPass. (Disclaimer: premium user of both)

Google Bookmarks may be an option depending on your browser choice and plugin availability. Google Chrome Sync (and possibly plugins for other browsers) may also work; for Firefox I believe it's tied in with the Google Toolbar for Firefox but YMMV by browser.

Delicious may be an option; I used to be a user but have mostly stopped after the headaches with their switchover (I switched to XMarks). I think they were trying to go in a more "social" direction like Digg, et al.

Pinboard is a commercial service (one-time fee) that apparently also uses the Delicious API, so some addons/widgets may be able to work with it instead of with Delicious. Long-term support of those may be questionable if Delicious doesn't still support that API.

UPDATE: For XMarks, I'm not sure what their plans are for IE10, but I'd expect them to only support the Desktop version of IE - there's apparently also a "Metro" version that will not allow any plugins.

It is now 2012, and Xmarks is still the best solution.
Bought by LastPass, its existence and continuing free status are not any more in doubt.

It now fully supports Firefox 3+, Internet Explorer 7-9, Safari 4-5 and Chrome, all available from its download page.

From The Tech Club: Transmute is a free utility software which will help you to synchronize bookmarks between various browsers, organize bookmarks, convert bookmarks for use in bookmark managers, share bookmarks with others and more. And best of all, it’s free! 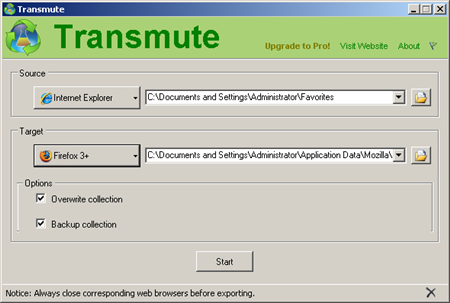 Downside: doesn't sync between computers/online. Though you could have Firefox sync with the Google Toolbar and have your other browsers sync with Firefox.

But else here's a Mashable overview of 25+ ways to sync your bookmarks.

Firefox 3.5 now has weave which is nice, but only for Firefox.

The main thing I like most is that you can run your own weave server.

You can add a bookmark from Chrome to Delicious by dragging a link up to your Bookmarks Toolbar. Take a look here.

Or you can create a link in Chrome with the following link manually:

Then you can go to the delicious.com site to navigate to your bookmarks. I created a link for this to:

Bypass the problem: create an HTML page of links, and make that the home page of each browser.

Since Firefox, Chrome and Opera (not sure about Safari) has their own sync services, it might be not a good idea for using third-party services. So you should use one of those for your primary synchronisation service and plugins for using this service in other browsers.

Unfortunately 'bypassing' the problem is not ideal for me in that I use the bookmark toolbar extensively, in fact I've organized all my favourites into multiple menus on that bar, a simple HTML file just doesn't cut it.

Here's my solution. Chrome will allow you to directly import bookmarks from Firefox if you delete all the bookmarks off of Chrome, and it will also automatically sort the aforementioned toolbar almost like it is in Firefox. This works reasonably well for me in that Firefox is my primary browser, and I only use Chrome occasionally. You'd think that Chrome would have the import button (not the HTML import) available all the time, and that it would check for duplicate entries when import, but oh well.

You can also try Diigo, which is similar to delicious, and lets you save your bookmarks and access them elsewhere with internet connection.

It has a toolbar for Firefox (at least) and for other browsers, or if you don't like toolbars, you can also use bookmarklets.

Nowdays, is my favorite way of saving bookmarks. I reallized it is unneficient to save about everything i like as a browser bookmark, because it also tends to slow down the browser. For me, it is better to now keep them in the cloud, and Diigo does that just fine (it is similar to Delicious but with some other features you may find useful).

5
Xmarks shuts down. Alternatives to Xmarks?
2
Is there a way to sync Chrome bookmarks with other browsers automatically?
4
How can I sync my Opera bookmarks with Chrome or Firefox?
0
Globally accessible bookmarks: what are my options?
1
How can I sync my bookmarks between browsers and computers?
12
Is there any easy way to sync your bookmarks using only an ftp-server and some app?
2
How to sync all data (bookmarks, passwords, history) between 2 browsers?
2
Any browser sync solution which supports sync profiles like XMarks?
2
share (offline!) bookmarks between browsers

10
Add bookmarks to Delicious and Google Bookmarks at the same time
5
How can I remove all bookmarks from Google Chrome?
1
Faster two way Boomark/History Sync for Firefox?
1
Syncing bookmarks in Firefox' own "Bookmarks" menu with bookmarks of Android (4.0) phone
12
Is there any easy way to sync your bookmarks using only an ftp-server and some app?
3
How to sync Chrome bookmarks without logging in to Chrome?
1
one way bookmark syncing/syncing issues Chrome
0
Bookmarks - sync OS X Firefox with iPhone / iPad Safari