WinSCP screws up line breaks in files – how do avoid?

I'm getting pretty sick of how WinSCP screws up line breaks.

I could just use FileZilla for FTP and Putty for SCP (I think putty can handle that) but, that's rather annoying. How can I mitigate this problem?

I'd say that the comment left by acidzombie24 is the best advice. Personally I haven't come across a better FTP program than WinSCP. I recommend you change your settings to transfer using Binary, and use an editor like NP++ rather than the in-house editor.

Here are a few screenshots: 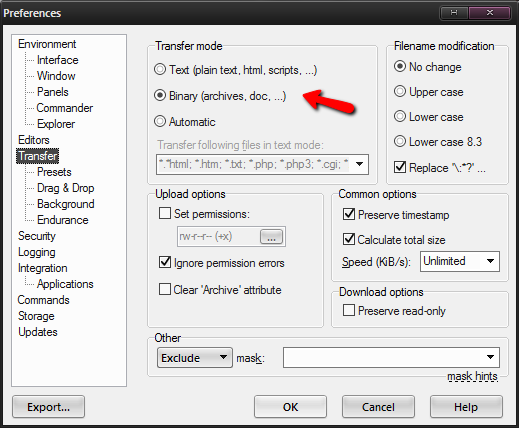 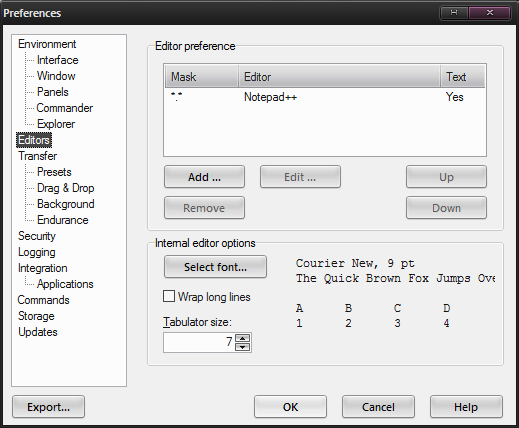 Redacted version of WinSCP FAQ Why are text file line breaks wrong after the file is transferred or edited?

After transferring or editing a file, it may happen that line breaks are wrong, what may manifest as:

Different platforms (operating systems) use a different format of text files. The most common formats are Unix and Windows format. A primary difference is that different character or sequence of characters is used to signify an end of a line. On Unix, it's LF character (\n, 0A or 10 in decimal). On Windows, it's a sequence of two characters, CR and LF (\r + \n, 0D + 0A or 13 + 10 in decimal).

While many applications and systems nowadays can work with both formats, some require a specific format. When presenting a file in an another format, they fail to display it correctly, as described above.

For this reason, file transfer clients and servers support text/ASCII transfer mode. When transferring a file in this mode, the file gets (ideally) converted from a format native to a source system, to a format native to a target system. For example, when uploading a text file using text mode from Windows to Unix system, the file line endings get converted from CR+LF to LF.

On the contrary, when you want to force WinSCP to use a binary mode, even when editing files in a text editor, you have to use an external text editor (WinSCP internal editor does not support Unix file format) and configure WinSCP not to force text mode for edited files. Also make sure your external text editor saves the file in the format you need (Most text editors nowadays support different text file formats, not just a format native to the platform the editor runs on).

If enabling (or disabling) text/ASCII transfer mode does not help with the problem and your transferred/edited file is still perceived incorrectly by the target system, you need to find out in what step the file got converted incorrectly (or haven't got converted).

To detect line endings used by a file on Windows, use following command on PowerShell console to display hex dump of the first 100 characters of given file (example.txt):

For a file with following contents in a Windows format

To detect line endings used by a file on Unix/Linux system use command:

For the same file as above, just in Unix format, it displays:

If you do not have a shell access to the remote system, download the file using binary encoding and use the PowerShell command on a local binary-identical copy.

Use these techniques to detect, what format both source and destination files have. When editing a file, detect also a format of a local temporary copy of the edited file as saved by the editor. See preferences for a location of the temporary copies.

When the above does not help you understand the problem and you decide to seek further support, include all your findings, including copies of both source and destination file. When editing a file, include also a local temporary copy as saved by the editor. Ideally compress (ZIP) the files to avoid your browser altering file format, when attaching the files to support request.

(I'm the author of WinSCP)

-Open file (with i.e. Notepad ++), open "Find and Replace" window [Ctrl+F] (check "Extended" under "Search Mode"),then type \r\n in first line, and \n in the second and click "Replace all" and Save.

-in "Preferences>Transer>Default" choose "Automatic(Transfer Mode)";
-Then in "Text" window, set such conditions (but i havent tested them well): 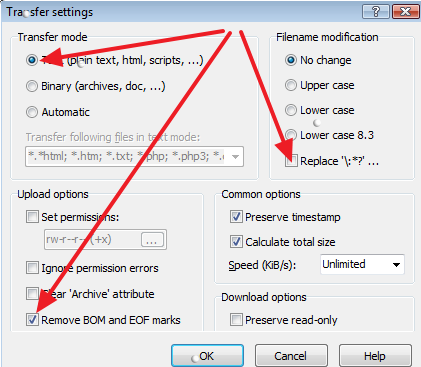 so, now your problem may be fixed. many people have this problem, because new lines are removed by default(in some cases) by WINSCP..

No more double linebreaks here. My solution was to uncheck the "Force text transfer mode for files in external editor" in the editor preferences. 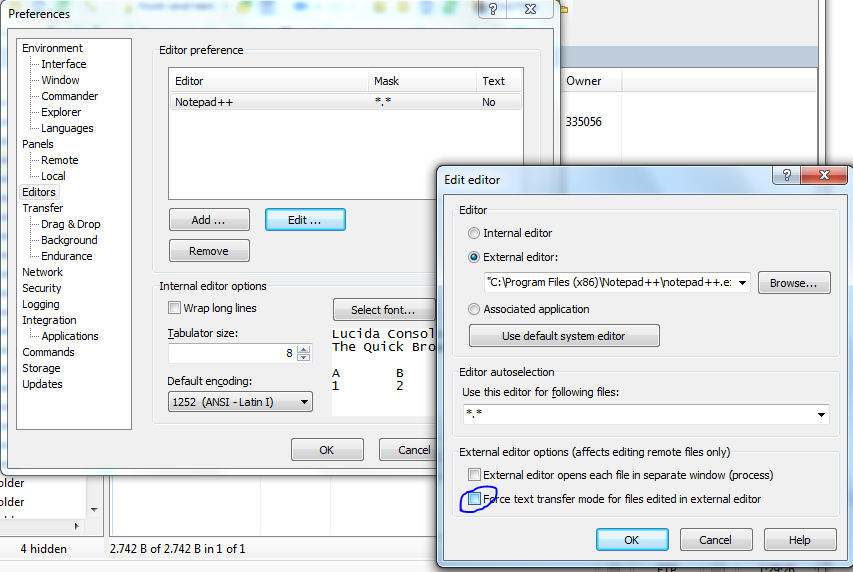 12
How to change user in WinSCP?
1
FTP suddenly failed to retrieve directory listing
1
Why does WinSCP open local directories with .exe files slowly?
0
Ordering of numbers in file name in FileZilla and WinSCP?
1
Downloading yesterday files in PowerShell using WinSCP
0
How to set up WinSCP to transfer a file to a remote ABCI server
0
How to fix this SSH access connection failure?
0
How to do automatic 2FA with SSH/SCP on Windows (ideally using PuTTY+WinSCP)?