How Can I Type A Checkmark (✓) Via Alt Code?

I'm trying to figure out a faster way.

Some fonts (like Webdings) have a special checkmark character, but this means it only works if that font is supported. Lots of applications and websites won't let you specify a Webdings font. And this is still a pain to have to change the font, and if you type something else next to the checkmark it will also be in Webdings and have to be changed, which is annoying.

When I hold down Alt and type 0 1 4 9, then I get a nice bullet (•). These are super handy, since most of the formatted lists add extra whitespace that's nearly impossible to get rid of and adds an ugly gap before the list.

According to (https://www.alt-codes.net/check-mark-symbols.php) I should be able to type the text 2 7 0 5, select it, and then hit Alt+X. However, this hasn't worked in any program I've tried. In Notepad++, for example, it wants to close the current file, and in Google Chrome it does nothing.

According to (https://softwareaccountant.com/alt-code-for-checkmark/) I should be able to hold down alt and type 1 0 0 0 3. However, when I do this I get a double exclamation mark (‼) instead of a checkmark for every application except for Microsoft Word. (As the site does also say.)

Just to be sure, I made an AutoHotKey macro to run through all the possible combinations of numbers that I could create with the Alt key, and ran it overnight to build a big list. The checkmark never appeared at all, though the bullet appeared over and over again every 256 entries. For example, I can make a bullet by typing any of the following key combinations:

However, I can't seem to find any combination which allows me to make any other more interesting symbols, and definitely no checkmark.

Can anyone explain why this isn't working and what I should be able to do so that I could type a checkmark using the alt code. Or is this not really possible outside of Microsoft Word and I just have to accept it and keep copying it from somewhere else?

The easiest way is to press Windows+. (dot) or Windows+; (semicolon) then type "check" to search for "check mark". This works anywhere on Windows, even without a numpad

See How do I bring up the emoji IME on Windows 10?

If you want to type arbitrary Unicode characters not in the above list then you must use the hex numpad by creating a registry key named EnableHexNumpad with type REG_SZ in HKCU\Control Panel\Input Method, set its value to 1 then reboot. After that you can type the character as Alt+➕Unicode codepoint value. The first numpad + before the code point is required!!!

Note that you can't use Alt code with decimal numbers larger than 255, except in a few applications that capture the Alt hotkeys and process the Alt codes themselves. Most will just use the default Windows behavior which is the integer value modulo 256 (i.e. the last byte of the value). As you already realized, the bullet appeared over and over again every 256 entries

Microsoft Word is one of the programs that treat Alt codes specially, that's why you see the above behavior. Alt+X is a special shortcut of MS Word and other similar text editors like Wordpad or Libre Office so of course you can't use it elsewhere. See I can use Alt-X to enter Unicode on an old machine. How is this possible?

First workaround is to create/save a python script. Then run it when you need to insert the checkmark character.

Another workaround is to use find and replace to insert the checkmark character.

Entering 2705 then pressing Alt+X works with MS Word (as already stated by @phuclv); it also works the same in LibreOffice Writer and Wordpad

A quick solution for your problem is a clipboard manager.

I use ditto, there you can set clips never to be auto deleted and also assign a name for them.

(Some apps doesn't like to be interrupted by Ditto, that case you also need to press CTRL+V) 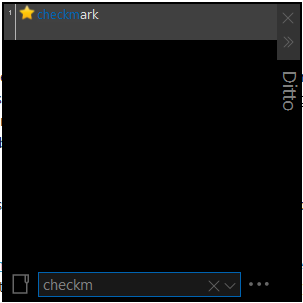 At first it requires some extra work (< 1 min) to set up your clips, in long term however it's much easier to type names than remembering ALT codes

Not the answer you're looking for? Browse other questions tagged unicode text-editing special-characters symbols alt-code or ask your own question.

5
Can't type Unicode because of keyboard shortcuts
4
How do I bring up the emoji IME on Windows 10?
0
What are these "extra" punctuations on my keyboard and how to use them
1
What do I need to do to view my clipboard in Windows 10?

11
Cannot use Alt code for Unicode character insertion any more
52
Italian keyboard: entering tilde (~) and backtick (`) characters without changing keyboard layout
6
How to type a minus char in Windows, or why do Alt-Codes produce different chars in different programs?
2
Why do I get "ń" instead of "ñ" when typing Alt code?
31
Windows 10 - Alt code results in wrong character
3
Alt code with letter + not working
0
PowerPoint: Alt+Unicode number results in replacement character