Is there a way to see any tar progress per file?

I have a couple of big files that I would like to compress. I can do this with for example

The problem is that I can't see any progress, so I don't have a clue how long it will take or anything like that. Using v I can at least see when each file is completed, but when the files are few and large this isn't the most helpful.

Is there a way I can get tar to show more detailed progress? Like a percentage done or a progress bar or estimated time left or something. Either for each single file or all of them or both.

For OSX (from Kenji's answer)

Use pv. To report the progress correctly, pv needs to know how many bytes you are throwing at it. So, the first step is to calculate the size (in kbyte). You can also completely drop the progress bar and just let pv tell you how many bytes it has seen; it would report a 'done that much and that fast'. 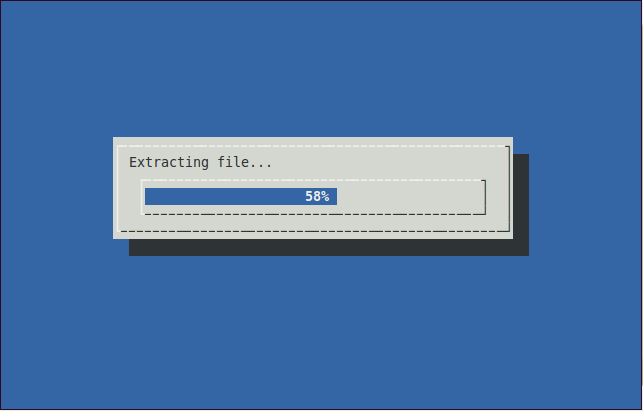 Check out the --checkpoint and --checkpoint-action options in the tar info page (as for my distribution, the description for these options is not contained in the man page → RTFI).

With these (and maybe the functionality to write your own checkpoint command), you can calculate a percentage…

Another way is use the native tar options

tar has the option (since v1.12) to print status information on signals using --totals=$SIGNO, e.g.:

The Total bytes written: [...] information gets printed on every USR1 signal, e.g.:

Method based upon tqdm:

Just noticed the comment about MacOS, and while I think the solution from @akira (and pv) is much neater I thought I'd chase a hunch and a quick playaround in my MacOS box with tar and sending it a SIGINFO signal. Funnily enough, it worked :) if you're on a BSD-like system, this should work, but on a Linux box, you might need to send a SIGUSR1, and/or tar might not work the same way.

The down side is that it will only provide you with an output (on stdout) showing you how far through the current file it is since I'm guessing it has no idea about how big the data stream it's getting is.

So yes, an alternative approach would be to fire up tar and periodically send it SIGINFOs anytime you want to know how far it's gotten. How to do this?

If you want to be able to check status on an ad-hoc basis, you can hit control-T (as Brian Swift mentioned) in the relevant window which will send the SIGINFO signal across. One issue with that is it will send it to your entire chain I believe, so if you are doing:

You will also see bzip2 report it's status along with tar:

This works nicely if you just want to check if that tar you're running is stuck, or just slow. You probably don't need to worry too much about formatting issues in this case, since it's only a quick check..

The sort of automated approach

If you know it's going to take a while, but want something like a progress indicator, an alternative would be to fire off your tar process and in another terminal work out it's PID and then throw it into a script that just repeatedly sends a signal over. For example, if you have the following scriptlet (and invoke it as say script.sh PID-to-signal interval-to-signal-at):

If you invoke it this way, since you're targeting only tar you'll get an output more like this

which I admit, is kinda pretty.

Last but not least - my scripting is kinda rusty, so if anyone wants to go in and clean up/fix/improve the code, go for your life :)

You won't see how much is left, but you will see that it is progressing with a very simple addition to your command --checkpoint=1000

On macOS, first make sure that you have all the commands available, and install the missing ones (e.g. pv) using brew.

If you only want to tar without compression, go with:

If you want to compress, go with:

Note: It may take a while before the progress bar appears. Try on a smaller folder first to make sure it works, then move to folder-with-big-files.

If you known the file number instead of total size of all of them:

an alternative (less accurate but suitable) is to use the -l option and send in the unix pipe the filenames instead of data content.

you can know such value in advance (because of your use case) or use some command like find+wc to discover it:

Install the dialog and pv commands with

Here are some numbers of a prometheus (metrics data) backup on Debian/buster AMD64:

Canceled this job as there was not enough disk-space available.

Experimenting with zstd as compressor for tar with monitoring the progress using pv:

In my daily use I don't need to know the exact percent-level progress of the operation, only if it is working and (sometimes) how much it is near completion.

I solve this need minimally by showing the number of files processed in its own line; in Bash:

As I use this a lot, I defined a function alias in .bashrc:

I can compute the number of files in advance if needed with find directory | wc -l (Or better using the same function shown [find directory | pvl] to squash my impatience!).

Another example, setting rights for a virtual website (after that, a chown -R is fast because the filenames are in the filesystem cache):

It's true this lateral processing could slow the main operation, but I think printing a return character and a few digits cannot be too expensive (besides that, waiting for the next equal sign to appear or percent digit to change feels slow compared with the subjective blazing speed of changing digits!).

If you are ok with using 7z:

This will show the scanning drive stage

as well as some other useful information to watch.

For simple extracting with pv.

Here it is in action:

To install pv on macOS just use Homebrew with:

On other systems, you can look at the source repo here.

Not the answer you're looking for? Browse other questions tagged unix tar progress or ask your own question.

4
Linux wget, how to display progress percentage after session has reload?
1
How to use Pipe Viewer (pv) for measuring compression progress?
7
How make a compressed tar when there are too many filenames for the shell to expand on a single line?
12
Concatenate multiple tar files in one command
0
Tar progress per file with pv for multiple files/folders at a time?
1
Fast compression in 7z format (like zip or gzip)
0
extract files to a relative path from a tar file that was creating with -P flag
0
Is there any fast way to extract a single file from tar?
2
tar delete file with pipe without extract: what is the correct syntax?