How to fix messed up Logical Volumes From (initramfs) shell? (Linux, ElementaryOS)

I was formatting, partioning external hard drives using Gparted and Disks. I had to repeat several times for the same drive, because I had messed up the scheme I wanted.

My Disks sidebar showed a host of drives that no longer exist. (Suspect the mapper got messed up during the partioning.)

After copying Qubes ISO to usb, and trying to boot to it, it showed corrupted.

I rebooted to my primary drive (ElementaryOS)... and thats when the boot issue showed.

Here is the error: 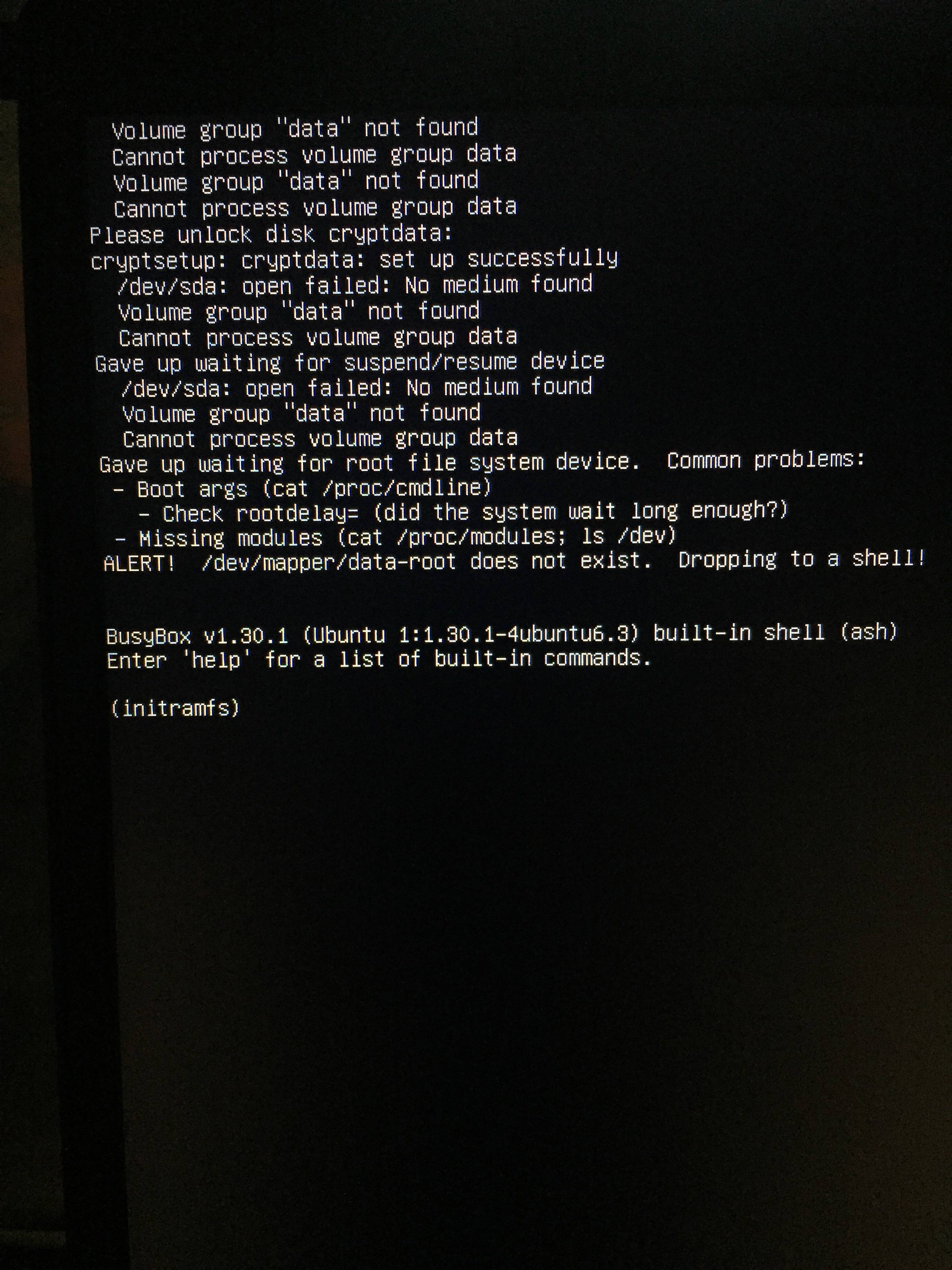 Booting to a USB ElementaryOS, and accessing the primary drive (to see if I could fix the mapper).

Using Files to unlock the primary encrypted drive, I get the error: 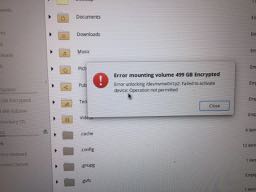 After the error the drive disappears from the Files devices.

Cloned the drive, to a USB, and tried mounting the encrypted clone. Same error on the clone.

Do you think it is indeed a mapper problem? Or something else? How would I fix the mapper in this situation?

If I can't fix the mapper, how would I access the data on the encrypted drive, and copy it to another backup?

Thanks to user1686 I've been able to determine it seems that the problem has to do with no logical volumes once Luks decrypts the device.

I cloned the drive to an external HD. I mounted primary drive (nvme0n1p2) using cryptosetup luksOpen in terminal and test7 as the mapper param. It decrypts.

I ran pvscan, and get "No matching volumes found".

I repeated for the cloned drive, using test8. Same result.

So, if I'm able to decrypt, and then there are no logical volumes inside, how would I access the data?

(At this point, I just want to get the data, and then reinstall a fresh system.)

Here's what I'm seeing in terminal: 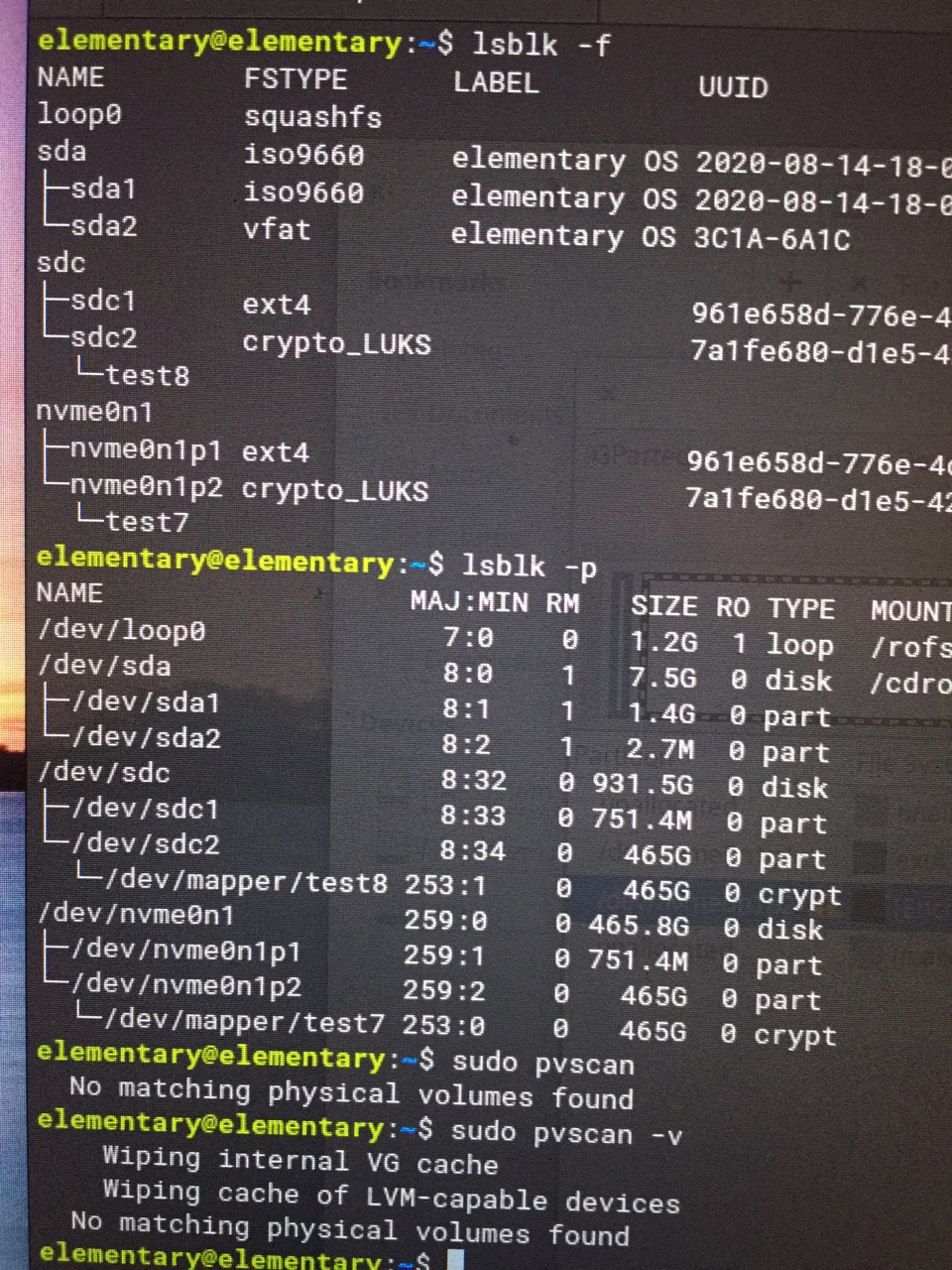 Mappings are ephemeral, like mounts, and the "mapper" isn't a property of the encrypted disk – it's a component of the currently running OS. Similarly, the 'devtmpfs' filesystem that's mounted on /dev always represents mappings established on the running OS – your physical disk shouldn't even have a /dev/mapper or indeed anything else inside /dev.

So if you connect the same disk to a completely different Linux system (with its own DM modules and everything) and still cannot access the disk, the problem is almost certainly not with device-mapper but with something else that is part of the disk.

For example, the LUKS metadata header on the disk could've gotten corrupted (it is used to actually set up the DM mapping). This is somewhat unlikely, as cryptsetup does prompt for passphrase without complaints, but it could be (if somewhat unlikely) that the installer set up two LUKS volumes with the same passphrase, and the first unlocked successfully but the second didn't.

The "No medium found" error message for /dev/sda is somewhat concerning. The only time it should normally show up is if the device is in fact just a drive/reader without any media inserted, e.g. a SD card reader with no card in it1 . Use lsblk -S or ls -l /sys/class/block/sda to find out. (If the message ever shows up for an HDD or SSD or USB stick, it pretty much means that device is dead.) That being said, from Elementary OS it seems that your system disk is NVMe, so /dev/sda isn't that.

I would suggest starting with lsblk (alone; with -f; with -S) from another working Linux system, finding your disk there, and trying to unlock each LUKS volume manually through command line, i.e. using cryptsetup open. From the screenshot it seems that you're supposed to have LVM inside LUKS, so after unlocking the LUKS volumes run lsblk -f again to see if the contents are recognized, and pvscan -ay (or whatever command LVM uses again) to see if the LVM metadata is working. (It seems that the boot process first opens a LUKS volume and names the mapping "cryptdata", then expects LVM to set up a logical-volume mapping named "data-root" on top of that.)

Not the answer you're looking for? Browse other questions tagged linux boot partitioning luks elementaryos or ask your own question.

5
Uefi and full disk encryption with lvm on luks
1
How to recreate encrypted dm-crypt/LUKS partition with predefined UUID on Linux?
0
select the correct LVM volume group as the root device
0
Clonezilla Dualboot (Windows 10, CentOS) + LUKS + LVM
0
How do I recover data from a Logical Volume on Linux after deleting it?
0
Moving a LUKS encrypted POP_OS installation with boot to a new location