How do I map a network drive to the root of a server (\\server)?

In Windows XP I can very easily map a network drive to the root of my NAS server. I browse to it in Explorer (\\192.168.1.70), choose "Map Network Drive", then choose the drive letter.

In Windows Vista, mapping the root of a server doesn't seem possible. I have to go "Map Network Drive" from 'Computer', then enter the address, but it will only let me map to specific shares (sub-folders off of the server root) and NOT to the server root share.

Since my NAS has built-in shares (music, photo, video, etc.) then I would have to have drive letters for all of these, which I absolutely don't want.

Why can I easily map a network drive to the server root in Windows XP, but not in Vista? Is there something fundamentally different in the networking across the two OS's? Or do I need to do things a different way?

(Possibly partial answer here.) This isn't possible from any version of Windows (including XP) to other Microsoft-based servers. I suspect this may be the case for other OSes hosting SMB shares as well, but I don't have a way to confirm that. 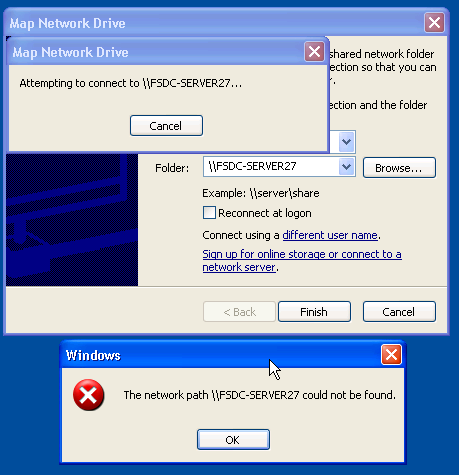 But this is not unexpected. Mapped drives in Windows have always terminated at a share.

Consider this: If it were possible to map a drive to the root of a server, there would be settings exposed to configure permissions for the "root" share. No such settings exist (at least in Windows). Indeed, all settings for controlling access to and the behavior of shares exist on the share definition itself.

Therefore I conclude it's not possible to map a drive in Windows to the "root" of a server.

\\hostname is not actually a valid "share". You need something after the host in order to map it.

This is not direct answer, but what helped me to address the issue when the one would like to easily access all the fileshares on a server, but can't or does not want to type/remember server name or create multiple individual drives for each subfolder.

Note: In newer versions of Windows (eg. Windows 10), you can right-click on the newly created Shortcut on your desktop and choose 'Pin to Quick Access'

While it isn't exactly a mapped drive, you do get a place where all your shares are easily accessible.

This solved what I wanted, and when I searched for an answer, this topic popped up in google first which is why I decided to put the answer here.

The NAS server is most likely running Linux with Samba.

You will need to define a new share which points to the root of the server, which in Linux is /. A better share may be to the folder containing the sub-folders of music, photo, and video, whose location you will need to find.

Configuring Samba is done by editing the file smb.conf. You could append to it, for example (there may be slight changes depending on the NAS operating system version) :

You will need to restart Samba for this to take effect, which (depending on the NAS Linux version) may be this command:

Or you may just reboot the NAS.

If you need more information about configuring Samba, you could easily find it on the Internet once you know the NAS Linux version.

Add a new share to the server (i.e.: root) that contains all the other shares as subfolders/links. Then you'll be able to map a drive letter to it.

I have been able to automount distinctive sub directories in Samba shares on my computer at login by using the terminal. The question and accepted answer can be found here. Read it to get details around my answer.

In short what I am suggesting you to do is open a command shell and make a link to the share by entering the following line in cmd or powershell: mklink /d C:\path\to\your\directory \\Server\path\to\share. Note that for powershell you will have to insert at the beginning of the command cmd /c

Using a File Manager may help?

Servant Salamander (shareware) has a "Change Directory" command (Shift+F7) that allows you to enter something like: \\NAS which does take me to the root of the NAS. (I cannot confirm that this works on W7 at this time, cause the NAS is on an XP system, though it does work on XP & I seem to recall it working on W7.)

(Additionally Salamander can see the Windows Network links so something like \\NAS\MUSIC or \\NAS\VIDEO are available.)

It works for me:

Enter the user credentials in the next window. Share data is some kind of root in the Netgear ReadyNAS.

Not the answer you're looking for? Browse other questions tagged windows-vista network-shares network-drive or ask your own question.

6
Map a Windows network folder using IPv6
0
Map two windows shares to one drive
0
Map a network drive from a Mac network on my PC
1
How to map network drives with multiple credentials per file server?
0
What is the resource consumption of a network drive
0
network drive mounts itself multiple times (win10, synology NAS)