Basic hardware information:
The hard drive in question is a Seagate BarraCuda 4TB (model number: ST4000DM004). For more details, see the output of hdparm -I among the appendices at the end.

Description of the issue and tests:
The problem, on the surface, appears to be just like the caching of the data to be written to the disk while the write speed is slower than that. However, things do not appear to be that simple in this case.

Copying files (on an NTFS file system):
When writing a reasonably large amount of data, the performance of the drive will drop suddenly and sharply. Again, usually this would be as simple as caching files in RAM, then the disk working afterward for a while. Here, however, when monitoring the /proc/meminfo file (under Ubuntu), the observed behavior does not seem to support this. Even after writing the data (either large files or several smaller ones) and calling sync, the amount of “dirty” memory will continue to decrease for a while, then grind to a near-complete halt. It will keep decreasing very slowly, until sometimes it eventually speeds up. This can repeat, depending on the amount of data left. Reading the device is also extremely sluggish when the writing speed decreases, and will remain so for a while even after sync completes if it does so in “slow mode”.

These initial tests were performed both from Ubuntu 21.10 and Windows 10, with similar behavior.

Additional remark for Windows:
When the disk stayed slow after completing the copy operation, and I tried reading files from the disk (e.g. playing a video, which kept lagging), Resource Monitor and Task Manager both showed a high percentage of disk usage on the device (100% or close to it) while the actual speed shown was <1 MB/s. (The OS also managed to freeze altogether at a point, but that may or may not be strictly related.)

Disk benchmarks:
To see if this is due to the file system or the hardware itself, I performed benchmarks on the device using the gnome-disks utility. The result of one such benchmark that I will show here exemplifies what I described above, the read and write speeds sharply dropping to almost nonexistence after a point, then recovering later (blue and red are respectively read and write speeds at each individual sample taken at locations going from the outside of the disk toward the inside, 1000 in total; the green dots and lines correspond to the access time benchmark which is separate from the others): 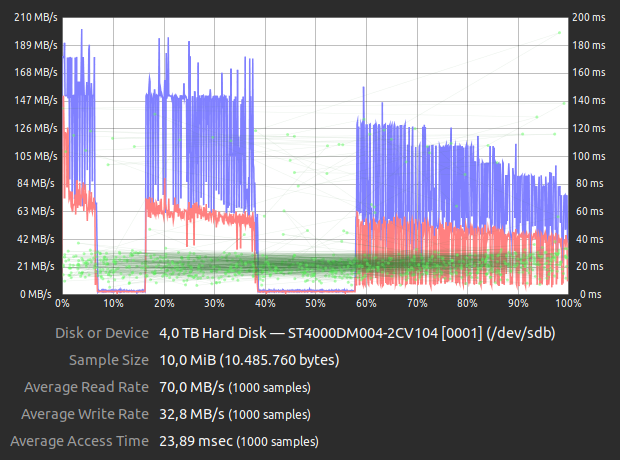 Note that, by my understanding, the benchmarking tool eliminates factors such as write caching. Additionally, /proc/meminfo showed little to no data waiting to be written being held in cache during the slow periods in any case; the complete content of it can be seen among the appendices.

With the writes disabled in the benchmark, no such phenomenon presents itself, though there seems to be an anomalous sudden decrease in speed in the inner sections of the disk: 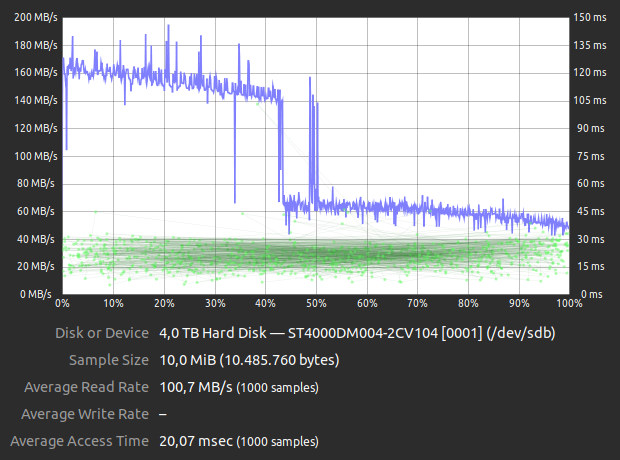 (The location of the decrease is not dependent on time spent, but rather indeed the physical location on the disk, as indicated by other benchmarks with a different sample number where the cutoff happens at the same spot.)

Equivalent benchmarks on other, presumably healthy hard disks in the system yield the expected, regular results like this: 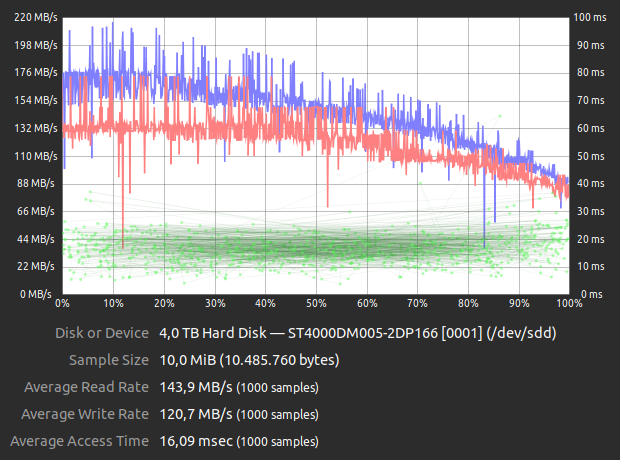 Conclusion / Question:
From this I gather that the issue is likely caused by some hardware or firmware failure, but there may be any number of things I have overlooked.

What might likely causes of the presented phenomenon be? What next steps should I take to diagnose the issue further? Any help is greatly appreciated.

Appendices:
Detailed hardware information (as output by hdparm -I):

/proc/meminfo during the first benchmark, at the time when the read/write speed was slow:

The Seagate ST4000DM004 uses SMR to write data to the disk surface. This means, that in order to write a single byte, it might have to rewrite multiple gigabytes.

In "normal usage patterns" (as designated so by HDD vendors, not by users!) this creates not much of a problem - the data is written to a CMR cache on the outer rim of the disk. Later, when disk usage goes down, the firmware will move the date to its final place in an SMR band.

When writing larger quantities of data at a time, this CMR cache is exhausted and the process of I/O to SMR bands has to take over - this is slower by orders of magnitude.

Nota bene: This is not a RAM cache - it is a small part of the disk surface, that is written in CMR (i.e., without overlapping tracks) to make the SMR horror less visible to users.

Hard drives write data in sectors on tracks, however there is a limit to how close together tracks could be placed without interfering with each other.

Hard drive vendors realized that the problem of adjacent tracks interfering with each other could be mitigated if they gave up on the traditional random write access model and wrote large areas of data sequentially. Each track written would overlap slightly with the last. That means more data per platter which means higher capacity and/or lower cost. This is known as "Shingled Magnetic Recording" (SMR), by analogy to the way roofing shingled overlap.

Of course, that a hard drive that required major changes in the OS wouldn't sell very well. So they added translation firmware and a CMR cache area, so that the SMR drive would look like a regular drive to the OS. It is not terribly dissimilar to what SSD vendors already do.

The difference is though that flash is fast, so even with the translation layer, SSDs were still much faster than HDDs. SMR HDDs on the other hand have performance that drops off a cliff when the CMR cache area runs out and the drive must block new write operations on the slow process of rewriting shingles.

Unfortunately, all three of the remaining HDD vendors decided that the way they would release this technology is by slipping it into the product lineup without telling people about it. So rather than being able to make a conscious choice whether or not to accept a performance cliff in exchange for a slightly lower cost per unit of storage, people unknowingly received these drives. Under pressure from the media, they did eventually release the information on which drive models were SMR, but it's still not made obvious to customers.

Since it was all three of the major HDD vendors who did this, you can't just boycott the culprits, so it seems the only option is to carefully check every hard drive you buy from now on.

Curiously, despite the original motivation behind SMR being capacity, it seems the largest drives were often still CMR with SMR being mostly seen on drives in the low single digit terabytes.

Not the answer you're looking for? Browse other questions tagged hard-drive performance hardware-failure or ask your own question.

3
cannot format bad hard disk
13
Do hard disk drives turn on 512e (512byte emulation of 4k sectors) as-needed depending on host controller?
2
Why does my Crucial M4-CT128 SSD only achieve about 30 MB/s on writes?
5
Why would a 3TB disk show as being 746GiB
0
USB HDD Case: can't mount 2nd ext4 partition
1
Is it possible for the filesystem's logical block size to be less than the physical sector size?