Is there a way to set up characters with 5 digits of unicode as dead key code points in MSKLC? 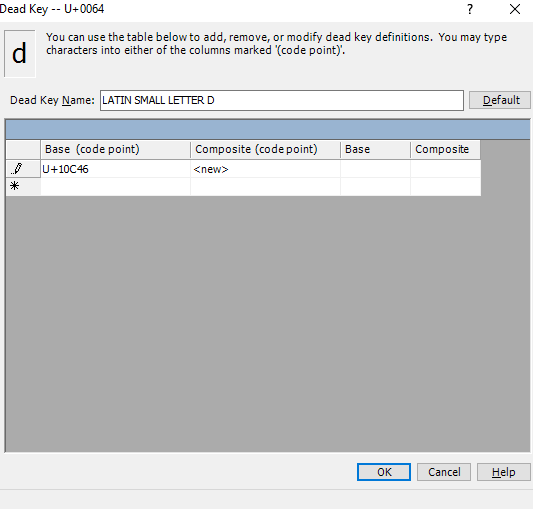 Is there any way to overcome this software limitation? As seen here

it only takes inputs of 4 digits long while i need to input in unicode keys 5 digits long, when I try to do it, an error message saying "The value must be either a single character or a code point" pops up

The documentation for MSKLC 1.4 (the currently available version) indicates that the codepoints used must all be UTF-16. One alternative to MSKLC that I looked into, KbdEdit, went into a little more detail in their documentation:

Due to an internal Windows limitation, dead characters are restricted to operating only against single BMP (<=FFFF) Unicode characters. This restriction applies to all components of a dead character transformation; the “from” and “to” characters, as well as the dead character itself.

So, the short answer to the question is “It can’t be done.”

There are unicode code points with names that include the word ‘combining’; often, you can get the visual effect you want/need by using these - for example, if for some reason you wanted a macron over the DESERET CAPITAL LETTER SHORT OO (0x1040B), you would insert that letter followed by COMBINING MACRON (0x303).