Finding and replacing " with « in Microsoft Word

Been doing my final uni project for the last 3 months. Ended up with doing quoting wrong all along

I used " in the entire document while should've used «

So I thought I could find and replace all the quotes with the default find-and-replace Word's function like so: 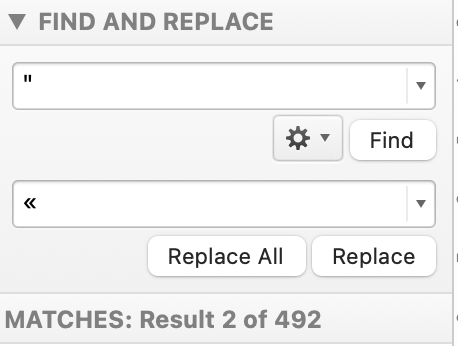 When I click "Replace All", the following popup appears: 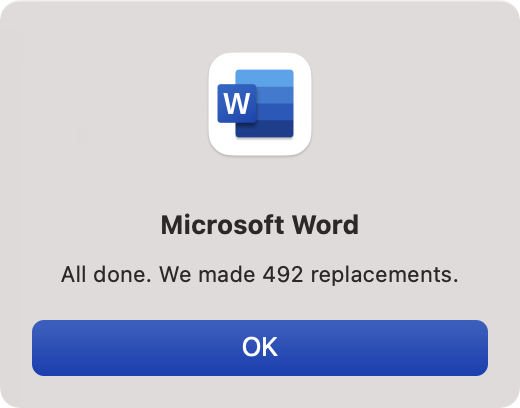 But that's rather an evil lie. Word didn't replace anything even though it notifies the user otherwise.

I'll lose my mind replacing all the mess manually... Is there a way I can do it automatically?

There are two situations: you are using so-called “smart quotes” (default) or you have "regular quotes" (you disabled Word's automatic replacement of quotes for smartquotes). In either case, ensure that the options to ignore punctuation and whitespace are not enabled in the find and replace dialog!

For situation two: use the advanced find and replace dialog and enable the "use wildcards" checkbox. We need to use regular expressions (regex) to differentiate between an opening and closing quotation mark since they are the same actual character. For opening double-quotes, use "([a-zA-Z0-9]) and for opening single-quotes, use: '([a-zA-Z0-9]). In the replace box, for both, use: « \1. For the closing double-quotes and single-quotes, use ([a-zA-Z0-9.,\!‽\?])" and ([a-zA-Z0-9.,\!‽\?])' respectively in the find field and put, \1 » in the replace field. Read on for an explanation of these special search strings.

As a brief primer of regex, anything within parenthesis is captured into a numbered memory location and you recall that memory with \n The first paren maps to \1, the second to \2, etc... The square brackets are sort of a ? wildcard on steroids: instead of matching any one character, you can define exactly what characters match. Ranges are supported and here, you can see that we are matching (and storing) any alphanumeric character, upper or lower-case for the opening quotes. For closing quotes, we add certain punctuation which typically precede closing quotes. Note that the exclamation and question marks both are special characters in regex and so they are preceded by the backslash to indicate matching the actual character \! matches ! and \? matches ?. You may be unfamiliar with the interrobang character which denotes an exclamatory question; it is not a special character in regex and so doesn't need the backslash.

3
Microsoft Word 2013 -- multiple spaces not recognized by Find/Replace?
0
Find questions (words before "?") Regex Microsoft Word
0
Word 2013 can find, but can't replace
1
Word - find/replace highlighted text with shaded text AND preserve all other formatting?
1
ms word find/replace highlighted text, doesn't work on this mix of hebrew and english in right to left mode
0
Word 2017 won't Find/Replace text within field
0
MS Word find and replace can't find ^t^p
0
Is there a formula to run in order to remove special characters created in word? (Curly quotes, hyphens, etc.)
0
MS-word find/replace using wildcards: How to find all characters with 20pt font-size and wrap it with <h3></h3>