How can I reduce the noise my CPU makes, like fast mouse movement does?

My CPU produces a noise when it's at a certain frequency.

I noticed that when I set my mouse to a 500 Hz polling frequency and move it in circles, the CPU noise practically disappears. Using lower polling frequencies (200-300 Hz) doesn't have the same silencing effect. This also happens with four different (new) PCs at my house, so I assume it's not some kind of defect.

As I don't want to constantly move my mouse, I am looking for a way to send a constant polling signal of at least 500 Hz to my computer, such that the CPU is "silenced".

What kind of device or software can help me achieve this goal?

Edit 1:
Creating artificial load to the CPU has no silencing effect anymore after the general CPU load has increased further. This probably means it can never serve as an effective method to reduce CPU noise.

Edit 2:
Many suggestions here. I'm currently investigating what is really happening in my specific situation.

Edit 3:
Turned out that this noise issue is most likely a manufacturer problem.
I decided to inform AMD through their online service request system
about my problems with their Ryzen 7 Pro 5750G models.
The trigger for the noise was the AMD Ryzen 7 PRO 5650G model that is actually integrated into all 4 PC's.
I recently contacted the company who originally assembled these Win 10 desktop systems for us to let their IT specialists analyse this specific issue with own testing machines.
They generally confirmed my observations and informed me that only the AMD and board manufacturers are capable to eventually provide a solution in the future. Specialists confirmed increased motherboard noise while mice are used to zoom/rotate objects in Blender if the Blender application window(the same behaviour in Autodesk Maya) is significantly larger than 640x480px.
In addition they noticed that specific motherboard models and even "duplicates of the exact same model" produced constant noises in Windows as long as the "Global C States" option in BIOS is activated for all the 5750G's.
Because they identified the specific processor model 5750G from AMD as the trigger for the increased motherboard noise and because this very disruptive noise behaviour has negatively impacted my workflow with 3D modeling applications, we decided to upgrade.
This time all motherboards are going to be replaced with B660 boards from MSI and we chose INTEL Core i7-12700's including new CPU coolers to safely avoid this issue.

Is there [...] anything (a device) that doesn't require my manual input

You can use any Arduino based on the ATmega32u4 to emulate a mouse (or keyboard) and send data every 2 ms (i.e. 500 times a second).

There are also Arduino libraries for doing this with any ATtiny85 such as the Digispark and cheap clones of it - this is slightly harder to work with though. 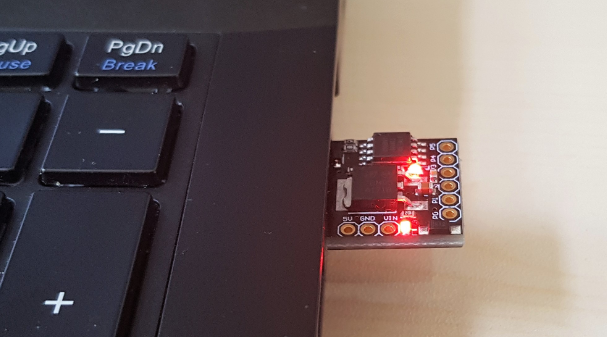 You could probably do the same with a Raspberry Pi Pico - which might be cheaper (around $4).

Having said that, I think it would be much better to identify and fix the cause of the noise in the PC.

As other's have noted, if you've observed this behavior from multiple PCs in your home, the problem is most likely with your incoming power utility rather than any of the PCs.
Coil-whine is a well established phenomenon of electrical circuitry attempting to filter electrical noise from the power supply.

The answer Chris Woods offered has an excellent suggestion to start by going through your home and removing power from your appliances until you observe the problem going away. As stated this may identify a local source of the interference.
As suggested by Chris Woods, in the event that you are unable to locate the source of the interference, you might consider investing in a UPS for it's power-filtering capabilities. This has the added bonus of protecting the machine plugged into it in the event of unexpected power failure.
Another consideration of note would be a line conditioner - it does a comparable level of power-filtering as the UPS, however this is all it does - it takes no batteries and offers no protection from events which interrupt your power. This makes it slightly more friendly to the budget for the purposes of shipping, and low-overhead for maintenance as you have no batteries to be concerned with.
Regardless of whether you purchase a UPS or a plain line conditioner, ensure that you invest in a unit which has sufficient current capacity to support each device you wish to apply line filtering to. If you have multiple devices that are far enough apart, you may even consider purchasing multiple smaller UPS/line conditioners than a single large one.

The issue sounds more to do with your property's incoming utility supply, or some other device with a poorly designed PSU producing feedback onto your property's supply. You may also be very unlucky and be living next to a neighbour whose faulty or badly-designed equipment is impinging on your supply, if you have a weird or outdated power distribution to your properties. This can also happen if their electrics are in poor condition and you share a local drop from the street supply. (I've heard several stories about Christmas tree light power supplies or dodgy CCTV camera power supplies causing interference with WiFi, radio/TV reception, or noise on mains supplies to other parts of a building).

EMI and coil whine is an annoying problem sometimes without a quick solution.

Which country are you in? Your utility provider may be able to assist if you can prove the noise is not limited to just one device. Might not hurt to ask your neighbours if they also notice this problem with their PCs, or if they've noticed any problems with power supplies.

How is your breaker box / consumer unit (aka fusebox)? Do you hear it humming or buzzing particularly loudly? If so you may have a residual issue which would require a qualified electrician to inspect and fix.

You mentioned 500 Hz which implies you're possibly not in the USA given that's a multiple of UK/European/some ASEAN countries' mains voltage frequency. If you plug the computer in on another ringmain (UK) or branch circuit (US/elsewhere), do you still get the EMI/coil whine?

Also, have you considered buying a quality UPS which can also do Active Power Factor correction (important for modern PSUs), to produce a clean isolated supply of AC? I use a Cyberpower CP1300EPFCLCD. Not cheap, but worth every penny, it's saved my equipment from multiple blackout and brownout events in the last 18 months.

This noise is an artifact of how the power-saving features of your computer operate.

When there is little load imposed on the CPU, the CPU lowers its clock frequency. This has a complex logic, usually done in both hardware and software. The voltage powering the CPU is lowered as well.

Then again, lowering the clock frequency and the voltage has some practical limits in saving power.

When the load is even less (the computer is absolutely idle), it becomes advantageous from the power saving standpoint to absolutely power off parts of the CPU for a while.

This sequence of powering up/down generates current pulses in the power rails, as well as power supply inductors, who change their shape and size by a tiny bit. While their main operating frequencies are 10^5 - 10^6Hz (absolutely inaudible), the above scenario generates 1kHz (right at the maximum of the human ear sensitivity).

And this is the sound you hear.

One can simply disable this power saving feature in and the sound will completely disappear.

But the consumed power in the idle state will be a lot higher.

What you intend to do is to create an artificial load to the CPU. This may also work, but is even less reasonable.

0
What would cause a machine not to output a graphics signal?
1
Hardware failure. What's happening?
0
Computer Freezes Up With Vertial Lines Across Screen and Audio Spazz
1
Likely cause of BSODs associated with Desktop Window Manager warnings
20
RAM tests inconsistently - what is the most likely culprit? (i.e. what should I spend money on replacing)
14
Why does my computer make a screeching noise when Notepad++ is open with NUL characters?
0
GPU Fan Weirdness