Is it low power input to GPU or thermal throttling actually or something else?

It was heating probably more than normal (CPU cores around 95+ °C, GPU 78°C) during playing games like GTA V.

And my GPU core clock won't go above 405 MHz while playing GTA V as shown below (the photo is little blurry but you'd notice the GPU temperature. It is from Open Hardware Monitor) 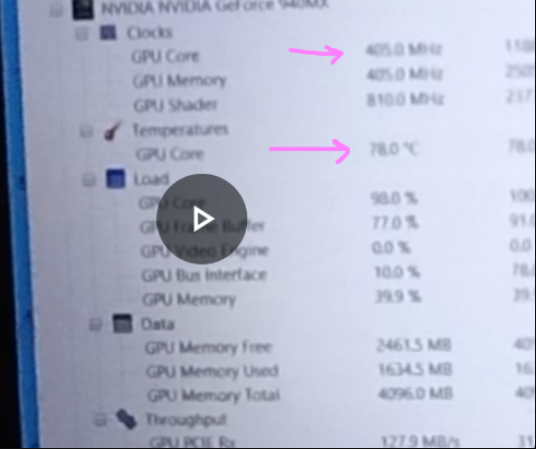 Then I just replaced thermal paste.

After that I tried same games.

So I assumed thermal paste and cleaning my laptop fan made some positive effect.

Effect on the games:

Light weight games like Counter Strike made no difference. They were very smooth and GPU won't go above 57°C.

GTA V - I noticed GPU core reaching above 405 MHz. It reached around 950 Mhz which made me happy.

However, the higher MHz kept fluctuating. I mean, game runs at around 950 Mhz for few minutes and then next 1 or 2 minutes it will go down at 405 MHz.

The game ran always at 405 MHz before thermal paste change so I never noticed fluctuation. It was slow but no fluctuation.

And it continued like this. Stats on same are given below. 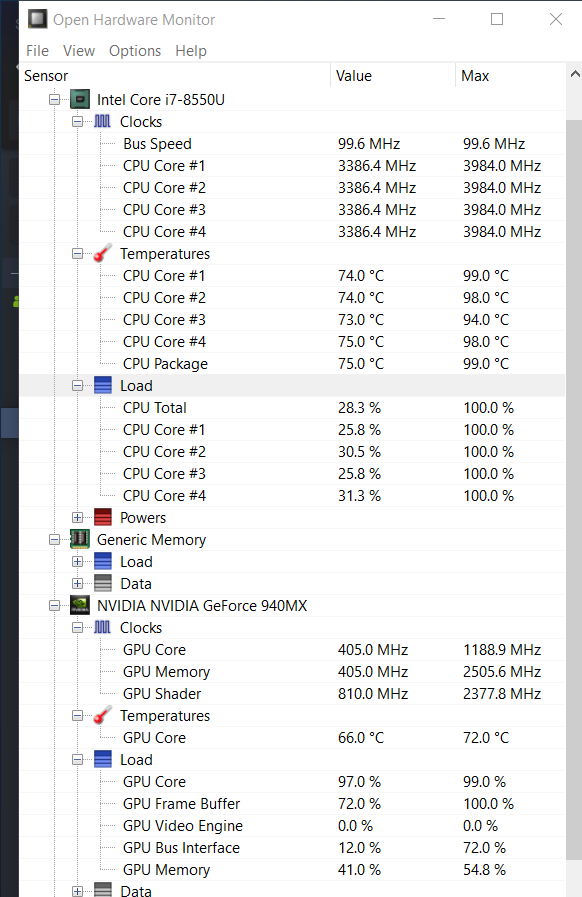 When it was around 950 Mhz, the temperature was around 70°C. CPU core clocks were around 2500 MHz 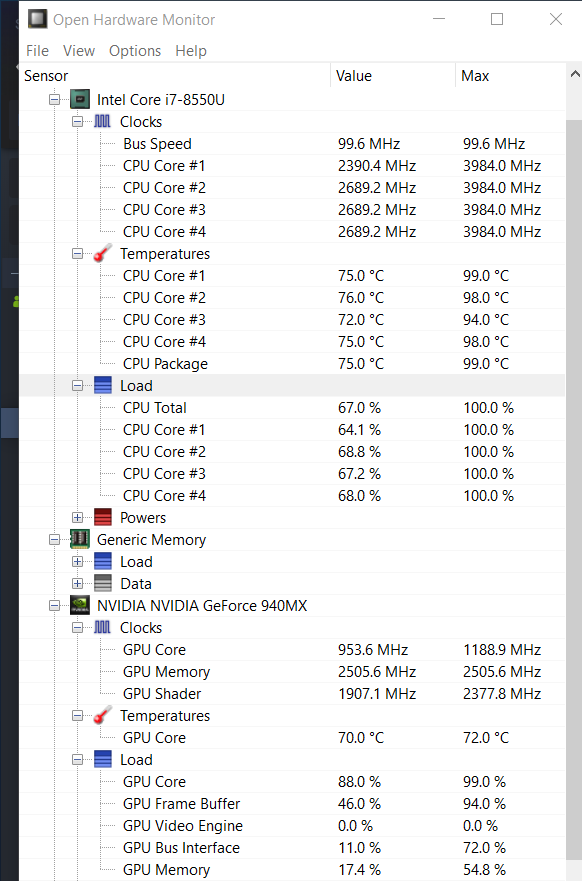 My overall observation and conclusion:

The thermal paste probably fixed temperature issue but this fluctuation problem is related to either CPU clocks or GPU being given less power. So it runs at 405 MHz from time to time because GPU temperature is slightly low - 66°C. Low power == less temperature?

What I tried to fix it:

Then I thought maybe something has changed recently and GPU max temperature has been limited to 72°C and so it can't improve performance at all?

Why I think so is because before I applied thermal paste, the GPU would touch 78°C often (speed won't cross 405 MHz though).

So I used GPU-Z software to see if there' some temperature limit on my 940MX GPU:

It says Current = 70°C. So I feel that is where it is limiting something.

Given all that, what could be the reason of this kind of fixed fluctuation? Is it due to some power issues? Or the game like GTA V too heavy for this processor? So this fluctuation in this game with this processor should be normal?

Or could it be related to some CPU issues too?

EDIT: I further tested and I observed something more focused now. When my laptop charger is plugged in, the CPU temperature will tend to stay between 72-80 C. And GPU clocks fluctuates like I described before.

When I ran the game only on battery and no charger plugged in, CPU temperature tend stay below 70 C. There were almost no fluctuations in clocks. It ran fine on around 915+ clock.

Looks like CPU temperature has a role in the issue. And more specifically, issue is related to power sources - battery vs charger.

405-540 MHz does appear to be the core clock speed that your GPU runs at when it gets too hot. Either due to CPU or GPU temperatures reaching their maximums.

A free software like MSI Afterburner can help you know for sure if/when you're throttling and help track the conditions.

Or a quick test would be power it down for a bit/make sure it's cool. Then power it on make sure you're laptop isn't on a flat surface and is instead getting proper airflow by being elevated with a minimal or 'holey' surface. Something like this often makes a huge difference: https://www.amazon.com/%E2%AD%90KLIM-Wind-Laptop-Cooling-Pad/dp/B01M715BCV

Not saying I recommend or know anything about that one specifically, but overheating definitely sounds like the what's happening here. Basically anything you can do to make sure there's empty space/room for airflow at the bottom is a good way to test this. It may very well still throttle, but there should be a noticeable difference in how long it takes to do so.

As far as raising the temperature limit, that's not something I would recommend at all particularly on a laptop unless you're okay with permanent damage. The best thing you can do driver-wise is get the latest drivers specifically for the make and model and specs of your laptop if you want to stay safe and still get maximum performance.

Or if you're not particularly attached to that computer you can use MSI Afterburner to also attempt overclocking, although that isn't very likely to help your performance in this case as it'll still throttle on its own based on high temperatures, high voltages, or high power draw and just like anything I'm sure someone can find a way to hack in to change those settings, but as far as I'm aware if either of those three things are occurring (which seems very likely with a game like GTA V on a laptop) there's nothing you can do to change the thresholds.

Hell, if you somehow don't have a box to set the edge of your laptop on or something you could always try running the game with the laptop in your refrigerator... Which is a bit of a joke, though if you actually went with that you either want the house to be bone-dry or to make sure your refrigerator isn't actually cooling your laptop below "normal" temperatures, aka your laptop is still at least warm in there. Condensation could start forming otherwise since warmer air can carry a lot more moisture than cold air, so if you have 50% relative humidity at 100 degrees fahrenheit, that would equal WELL over the maximum relative humidity that 75 degrees is capable, so you'd literally be making it rain in that example.