I am trying to upgrade the storage:

I replaced the old SSD on the adaptor and connected it back to the motherboard. However, the system was unable to recognize the new storage device.

I wonder whether the error is due to incompatibility between NVMe and SATA? If yes, is there any adapter from M.2 NVMe SSD to SATA?

Please let me know if you need more details, and I highly appreciate your hints or suggestions.

Yes, SATA and NVMe are completely different protocols. It just happens that the same M.2 (aka NGFF) form factor is used for both kinds of SSDs.

With M.2 slots built into motherboards, the same slot can be dynamically routed either to the SATA controller or to the PCI bus depending on what kind of SSD you install – but when using an external M.2-to-SATA adapter, it's obviously wired only to the SATA port.

If this SSD is just for data or programs (e.g. games), you can look for an adapter from M.2 to PCI Express slots, because every NVMe SSD is just a regular PCIe device. This would give you much better performance than SATA ever could.

However, motherboards without M.2 slots typically won't be able to boot from NVMe SSDs (their firmware will be missing the correct drivers).

So if this SSD is where your OS is installed, and if the motherboard doesn't have any M.2 slots built in, then you should get a SATA SSD for the OS instead – and use the 970 for programs/data. (It doesn't matter whether you use M.2 SATA through an adapter or 2.5" SATA directly, it's still the same SATA.)

I would guess that actual NVMe-to-SATA converters do exist, on the grounds of NVMe-to-USB converters existing, but it seems like a poor idea in general.

If I understand you correctly the computer has a SATA interface and a SATA to M.2 converter was used to connect the oriignal 256 GB M.2 SSD.
A M.2 NVMe SSD in the same converter won;t work.

This is totally as expected.

The M.2 slot can support a SATA M.2 SSD, a NVMe M.2 SSD or both. But your SATA interface in the computer ONLY provides SATA.
That makes a simple passive converter from SATA to M.2 SATA possible (it is just a mater of connecting the correct wires), but that won't magically turn a SATA interface into an NVMe interface so that 1 TB SSD isn't going to work.

You should have bought a M.2 SATA SSD (or a hybrid NVMe+SATA SSD) for use with that SATA converter.

Make sure the SSD is detected in the BIOS first, that will rule out a lot of issues.

That said, there are differences between NVME and SATA, and they are not the same. SATA has a different connector than NVME and there are some hybrid SSD's that fit both. But just because they fit doesn't mean they will work.

See below image for the different types (this was taken from a store): 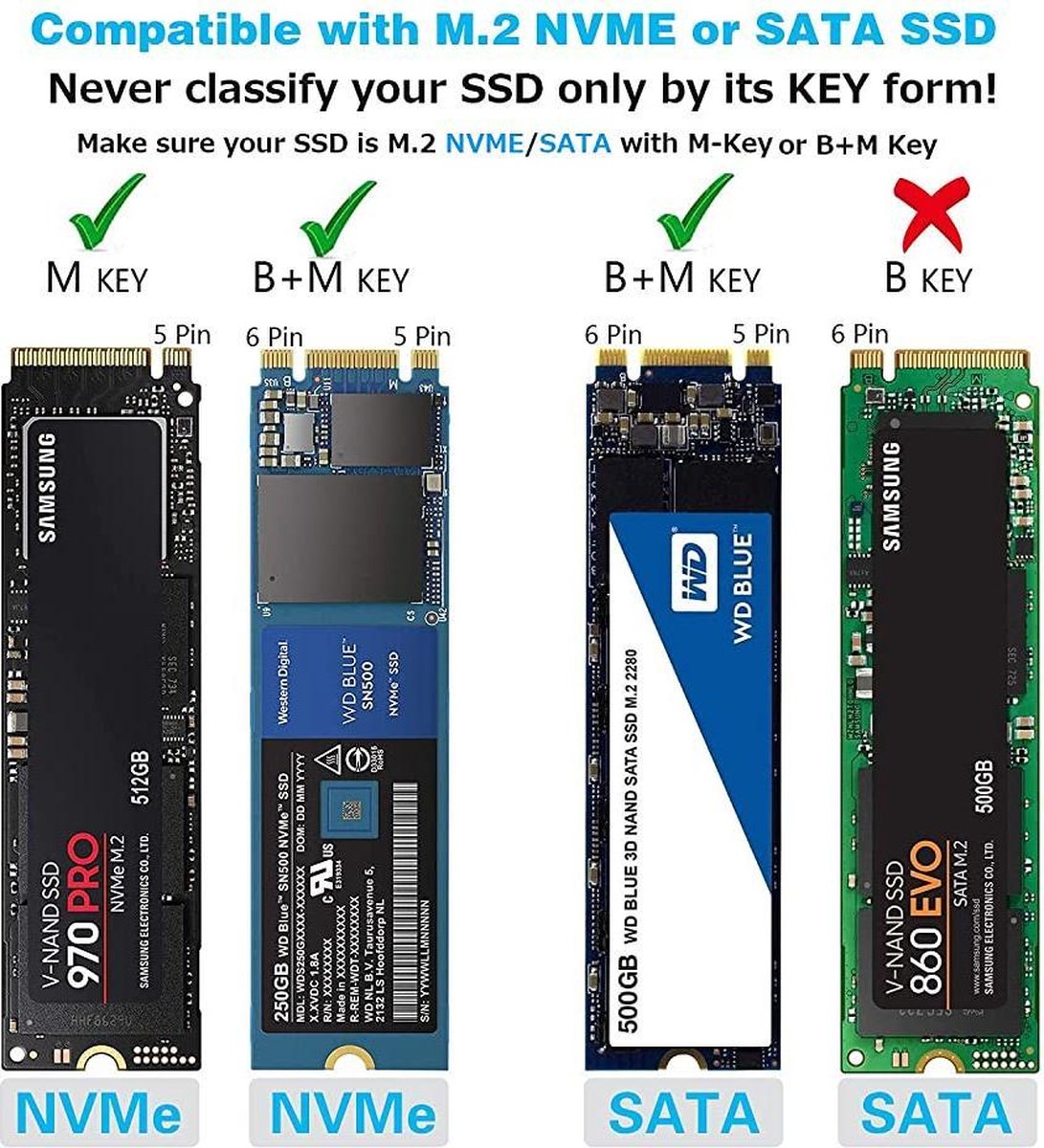 You need to make sure that the motherboard slot is capable of an NVME type M key SSD. If it is, then it should work. But if it isn't (and I think that is the case), then you need another SSD, one of with a SATA interface or make it possible for your computer to work with the SSD. This can be done by using a PCI-Express adapter or USB adapter with housing.

Not the answer you're looking for? Browse other questions tagged sata nvme m.2 samsung-ssd or ask your own question.