So I've never overclocked before, but it sounds like you just change some settings in the bios @ startup and you're good to go.

So I got some freeware called CPU-Z and it tells you lots of stats about your hardware.

But the weird thing is in the "clocks" section it says the core speed is 2000 but sometimes it says 2666 (when things are running). Is that the number I'm looking to raise? I'd like to only overclock it a little (to be safe), not something extreme like > 3.2 GHz.

So what are the first steps in overclocking this sort of processor?

Here's a screenshot of some of my stats: 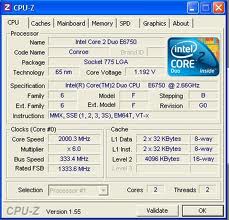 The values in CPU-Z for Core Speed and Multiplier will probably change over time, depending on the CPU load. This is due, in this case, to Intel's SpeedStep - the CPU is sensible enough to know that it doesn't need to have the frequency at full throttle all the time; this can save electrical power and hence the heat dissipation. However, as you point out, the defaults can usually be tweaked in the BIOS, and SpeedStep itself can usually be disabled (but it's there for a good reason). And it's also worth adding the usual caveats that overclocking is no guarantee, and that it does involve a certain amount of background reading.

Not the answer you're looking for? Browse other questions tagged windows bios overclocking cpu or ask your own question.

1
Core 2 duo desktop, but taskman and perfmon only report one cpu
2
Software way to cool down an old MacBook Pro
4
Could I have damaged a CPU?
1
Processor overheats like crazy
0
How to get more BCLK from non-k Corei5 cpu Haswell
2
High CPU temperature at my Core 2 Duo
0
Asus X99 Deluxe fails to boot (overclocked)
3
Cannot see CPU temperature on Intel Extreme Tuning Utility