What is meant to be plugged into the USB connector labelled "Touch" on thjs screen?

This PCB is a small screen, a 5" screen/display .. If I were to turn it over you'd see a display

What is meant to be plugged into the USB connector labelled "Touch" on this screen?

(Excuse the fact that apparently it's on a fleece material, and not a good idea to put a PCB on a fleece). 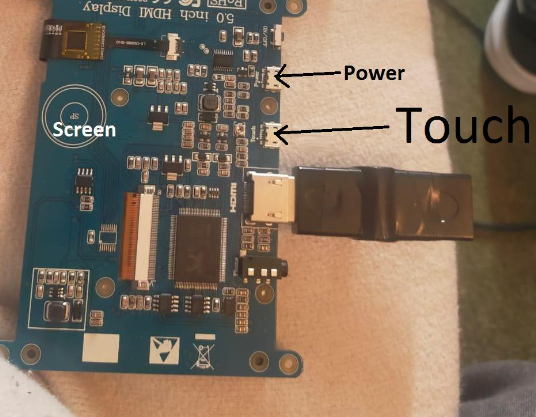 If you connect this usb to a computer, it would allow touch controls.

Eg: This port is used to comminuciate touch capabilities of the screen. Usuaully this screen is an embedded screen on a device, and this wire is not shown to the user, but it connects internally to the pc so that it has an additional mouse so to speak.

barlop: "so that connector would go to the computer and cause the device's panel to be both screen and touchpad?"

But also, a Micro-USB female (or Micro USB B female rather), implicitly indicate that they need to receive power.

Below is some explanation as to why.

From what I understand , a thing with a USB socket, is either a host, or a device.

USB started off with connectors of USB-A, and (Standard) USB-B.

USB-A female connectors send power(or relate to sending power, the circuitry behind them are meant to send power). Hosts have those. So computers have those. Or, a power source, battery based or a mains based thing with an ACDC adaptor and a USB-A female connector on it. So, a charger/power source, (Whether battery based, or mains based), that provides a USB-A socket. aka USB charger - battery or mains.

Devices can also have male A connectors e.g. a Flash drive.

So long as no gender changes are used, there isn't much or perhaps isn't any, danger of connecting two power sources together.

A cable that is USB-A male both ends, is I understand to be, illegal, as per the USB spec. Such a thing could lead somebody to connect for example, a charger to a computer, and harm both.

Micro USB A is extremely rare and has a particular appearance. When anybody says Micro USB they would mean Micro USB B.

That connector is Micro USB.. So, Micro USB B. And female.

Things with USB connectors that aren't cables, usually have female connectors.. with few exceptions.. Flash drives are one that have a male A. And as mentioned , Male A would be receiving power anyway, as would a female B.

One of those devices that provides a load which can be used to test USB voltage and current numbers under load, that also often has a USB male A connector., that's consistent with it receiving power.

That Micro USB on that thing you have with a panel(which could double up as screen and touchpad), has a female B, which is for receiving power. So, the circuitry behind that connector acts as a device rather than a host.

I checked with the manufacturer, and they said that either of those connectors will provide power to the device. I haven't tested the touchpad aspect yet but what they say of the screen is the case.

There is USB OTG.. so you can take a phone which typically acts like a device (requiring power), and the adaptor gives it a female-USB-A, and lets it act as a host, providing power, to a keyboard. That is still following the pattern of USB-A female providing power.

11
Danger/Risk of Plugging USB Devices into Powered USB Ports
4
Closing laptop lid and using external display causes mouse to move on it's own
0
Why does a USB cable allow MTP (Media Transfer Protocol ) but not mass storage device?
1
HDD not booting over SATA, only over USB
20
How to release/reset serial port FTDI devices - Mac OSX
1
Aura Sync crashes when graphics tablet is plugged in
0
Cannot View One of my USB Partitions in Ubuntu