I have the following data set with a list of players and their contribution to the group they belong. 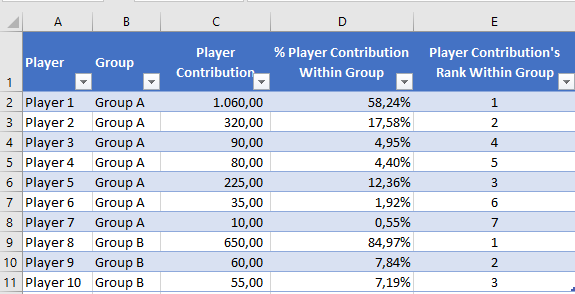 I've calculated the % of the player contribution within his/her group in "% Player Contribution Within Group":

Since the % contribution's may vary a lot between players (is very evident for Group B), to show this difference (for instance) between the first player of Group B (84,97%) and the second and third (less than 8%) of the same group, I would like to calculate a sort of "weighted ranking" (it it makes sense .. not quite sure). Is there a way (a formula) to express with the result of a calculation this kind of difference?

Thanks a lot in advance.

This is what you are looking for:

2
Make COUNTIFS count duplicate values only once
2
Excel: Calculate IF column based on another IF column
3
Calculating partial values for use in a weighted average
1
Looking for a more efficient way to compare multiple rows than COUNTIFS and MINIFS
1
COUNTIFS and SUMPRODUCT are giving different results
0
How to compute weighted sum in excel?
0
Excel formula - Average of vlookup results for every other field in a source field
2
Using the WEEKNUM function in Excel to calculate week numbers on the basis of 7 day blocks, primarily for Australian Financial Years
0
Excel: calculate rank avoiding duplicated values and using a calculated range