Why do we need the “Program Files” folder in Windows?

Maybe UAC/delegation/other security layers are involved? Or its just a place to hold 3rd party application and that's all.

Technically, programs can be installed or reside anywhere.

Storing installed programs under a common folder adds the benefit of organization so they can be quickly identified visually and with which security and other policies can be quickly and easily applied.

That's really about all the folder does. There is generally no technical difference between it and any other folder from an execution standpoint.

Note that I have never seen any definitive reference to support this other than things like this post, which I don't hold to be absolutely conclusive (even from Raymond Chen). The excerpt of interest from that link is

These are the permissions for a regular folder created in C:

These are the permissions of Program Files: 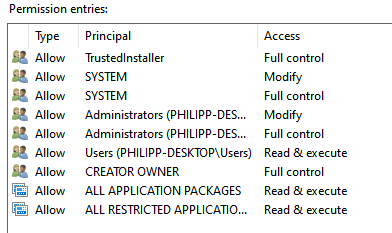 What you can see here is:

That means that you need admin rights (or need to run a trusted installer) to place a program in "Program Files", but once its placed there, anyone can run those programs. This prevents malicious programs from modifying other programs and it prevents users without admin rights from installing non-trusted programs. Further, programs are no longer able to write to their own directory (which was common practice during the 32bit era). This stops security vulnerabilities that change the program permanently and enforces the practice that programs write any persistent data they need to %appdata%.

However, those presets are just a default. It is possible to apply the same security policies to any other folder if desired.

Program Files certainly has special status. While it does not change execution directly for a well behaved program, UAC will catch writes to that folder and redirect them. This could mean buggy software will work when installed there but not elsewhere.

This does not imply we absolutely need "Program Files" but it does make such a feature vastly easier to implement.

From a user's perspective, maybe. It all depends on the next part of your question.

Maybe UAC/delegation/other security layers are involved? Or its just a place to hold 3rd party application and that's all.

Yes, other security layers can heavily influence a program's actions. When it was first introduced, 95 kinda made all users administrators by default since there was normally only one account, at least for consumer systems. So basically anyone could write to the Program Files folder. There were a large number of users that saw the Program Files folder, (as well as the Windows folder) taking up a ton of space, and would delete them since they didn't think they were needed. Oooops, the computer won't boot for some reason.

XP, (maybe 2000) changed this and had a default administrator account and locked those folders so that basic users couldn't delete things or write to them, (that broke a LOT of programs). By default users were not admins, and if the program ran by a user tried to write to or delete things from the Program Files folder, (or inside a folder in there), they'd get denied and may not work right. Normally reading was wide open, so if that's all the program did, it'd be fine. There are ways to allow access to regular users so that they can write and delete things in there, or you could run the program as an administrator, and it would probably start working again.

As for running differently from C:\SomeFolder, maybe. If you lock down SomeFolder the same as Program Files they'll probably act the same. By default, if you create SomeFolder, you'll get full read/write/delete access to it.

My memory is starting to get a bit fuzzy on some of this, so I may be off by a version of Windows or two. I've been in the IT industry for 17 years, and been playing with computers since the late 80s early 90s.

1
How to map a shared folder in the network to a local folder in Windows
2
Is installing programs outside of the default 'Program Files' directory wise?
182
Why does 64-bit Windows need a separate "Program Files (x86)" folder?
0
AppLocker and UAC on windows 8.1
3
Windows' Security warning on all files on local drives
1
How to run a trusted program as Admin on windows startup?
1
Get more compatibly modes
0
How to prevent a Windows program from modifying attributes of a folder/file?
1
7z.exe in CCTV Surveillance Progam Files Folder
0
Can not remove folder in program files directory. Changing permissions doesn't work