How can earbuds+mic use a single audio jack?

For various reasons, I've been working nomadically in a city away from home, oftentimes videoconferencing from the laptop at public spaces. The background noise annoys meeting participants, and there's only so much that I can combat this by muting and unmuting.

I started looking at earbuds with mics. I need to travel light, so no battery powered Bluetooth sets, and to avoid 3rd party drivers on the laptop, no USB devices. Something that uses the traditional audio output and the mic input.

I was surprised to find on Amazon many options for earbuds+mic, but they only have one jack (at least in the images). How is it that an earbud/mic combination can use only one jack rather than both the headphone and mic ports of a laptop?

Audio jacks come in different versions. Some devices feature two separate jacks for speakers and microphone. The layout of these connectors is called TRS (tip-ring-sleeve). 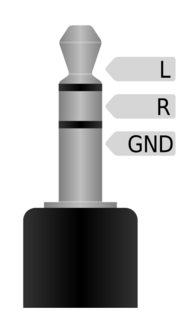 To connect another channel together with speakers via the same connector shape, an additional point of contact had to be created. This was done by adding another insulation ring to the connector, so there are now two contact points in the middle. The upper one of these is still being used for the right audio signal, but the lower one may be used for an additional signal. In the case of headphones it's being used for the microphone. The lower end of the connector remains the ground. This connector is called a TRRS (tip-ring-ring-sleeve) connector: 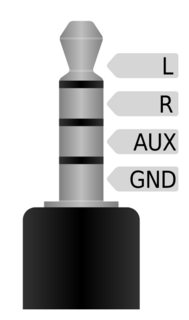 The corresponding jack for the connector has to be designed differently for both layouts.

In case your laptop sports two jacks (one for speakers, one for microphone), it won't be compatible with a single connector headset.

Both pictures were released under the CC BY-SA 3.0 by Benedikt.Seidl.

Standard mono phone plugs have two separate electrical connections along the barrel, one at the end called the tip, for the audio signal, separated by a plastic ring from a second one called the sleeve, which is the ground reference. (The voltage difference between the signal and ground connections determines the amplitude of the audio signal.) Stereo connectors add another connector between those two, the ring; these TRS (tip-ring-sleeve) plugs by convention carry the left channel on the tip, the right channel on the ring and the ground on the sleeve.

To add a microphone signal to these you add a fourth connector in the same way, giving you a TRRS (tip-ring1-ring2-sleeve) plug: four metal rings separated by three plastic rings.

Here are examples of TRRS and TRS plugs:

There are unfortunately several different designs for TRRS, and this can cause compatibility problems.

That should be enough to give you some sense of how this works and understand the various compatibility problems that can arise with TRRS audio/microphone connections. If you need a few notes on connecting traditional devices (such as tape players and old computers) via TRRS, I have some here in the section "Smartphone Connections"; that also has some links to further information. If you need a deeper look at how any of the above works, the Electrical Engineering Stack Exchange is probably the place you want to ask. (What an electrical engineer would call "beginner" questions are welcomed there.)

It may also be worth noting that stereo audio + microphone is not the only purpose to which TRRS jacks have been put. I've also seen them used to carry mono or stereo audio + video, for example, and even for a computer serial data connection. So don't assume that anything with a TRRS jack is always designed for headphones or a headset.

They use a different plug.

These are the headphones plug (left) and microphone plug (right). The one on the left is called a "TRS" plug because of the Tip-Ring-Sleeve arrangement. The other one would technically be "TS" for its lack of a ring, but I haven't seen this term actually used anywhere. The terms "stereo jack" and "mono jack" are also used. 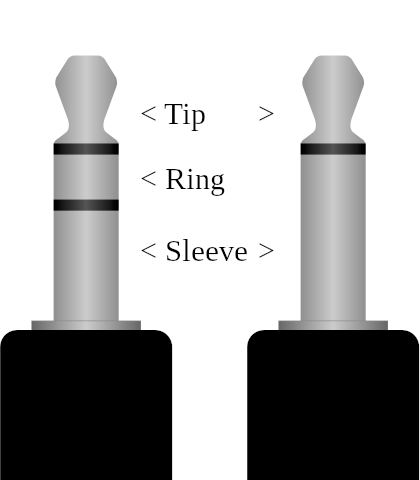 (Image adapted from this one)

In regular stereo headphones without a mic, the tip and ring are used for left and right audio channel respectively, and the sleeve is a common ground. Meanwhile a regular microphone is using a mono jack, with the tip carrying the sole audio channel and a ground on the sleeve.

On a headset a TRRS plug (Tip-Ring-Ring-Sleeve) is used, with tip and the first ring carrying stereo headphones audio, the second ring being a common ground and mono mic signal on the sleeve (usually - see cjs's answer for nuances). This type of plug requires a compatible TRRS socket. When plugged into a regular socket, it will behave like regular TRS headphones. 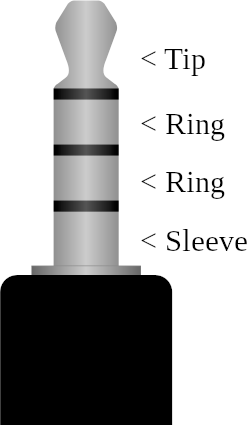 0
can i connect my phone audio(headphones/mic) to computer's (mic/headphones) jack?
1
Constant hissing from PC speakers after bumping front panel
1
Use Thinkpad T440p combined mic/headset jack
1
Use another computer headphone/mic jack
8
Always use laptop mic when headset is plugged in