I have Adata su650 480GB SSD which is generally working fine. Recent check of SMART values using CrystalDiskInfo reports 257 bad block count. Now I need to know a few things with respect to this parameter 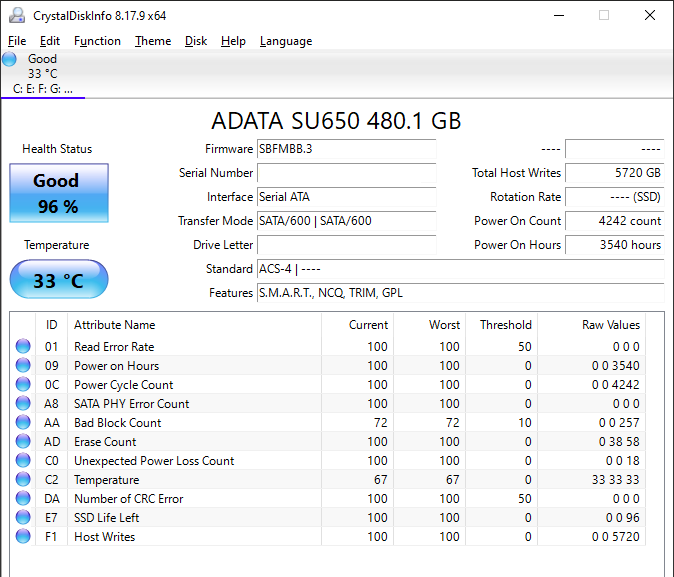 Thank you all for informative answers.

I have double checked with Adata SSD Toolbox but the parameters like Reallocated Sector etc are not reported. Maybe they are missing in the hardware itself.

I downloaded Adata’s SSD Toolbox app and it reports these parameters as Vendor Specified. See the attached screenshot:

That’s puzzling. Does it mean CrystalDiskInfo is interpreting the data and reporting it differently? Is that Bad Block Count really Bad Block Count? I would trust Adata’s tool as they know what they have designed? 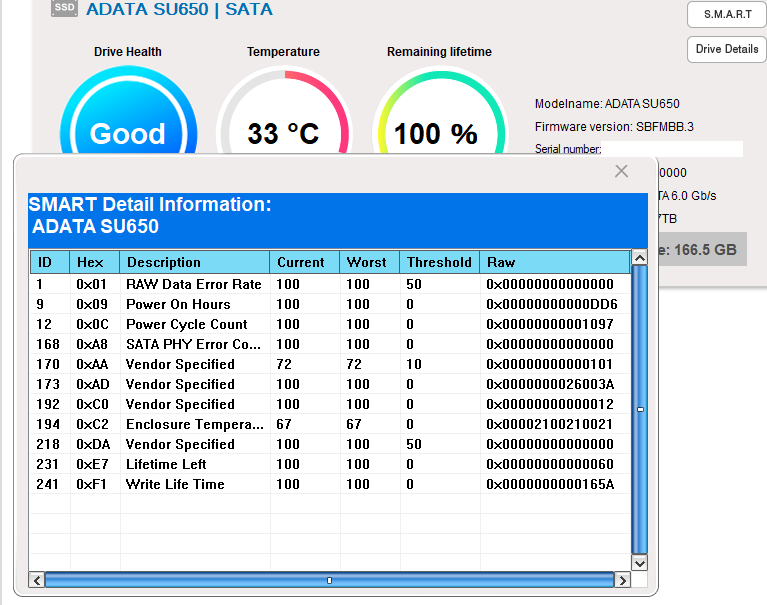 This question may appear to be a duplicate of Bad block count (early - later)?, but here I do not have early or later separation of data, so this is not an exact duplicate as such, and I have a larger scope.

Your SSD is in excellent shape and has no problems.

SMART attribute AA (170) is named by CrystalDisklnfo as "Bad Block Count", but other sources call it "Reserved Block Count" and define it as:

Although this parameter is not considered critical by the most hardware vendors, degradation of this parameter may indicate electromechanical problems of the disk.

Another description by Kingston says rather:

This Attribute is related to attribute 5: Retired Block Count. It provides a count of reserve (over-provisioned) blocks. (Note that all blocks, including reserve blocks, are in service at all times; reserve blocks constitute Flash memory space over and above the drive’s logical capacity).

The Attribute value is initially the total Reserve Block count. The value is decremented as the reserve block count diminishes over the drive’s life.

It's basically the number of good blocks that are available for mapping bad blocks, or in other words replace a bad block by one of these blocks. The number goes down, not up, as bad blocks are encountered. When it reaches zero, the firmware may place the disk in a read-only state.

CrystalDisklnfo gives as threshold the number of 10 as the danger point for your disk. I'm not sure that this number is the same as ADATA would specify for this disk, but your count of 72 is nowhere near it.

All the other attributes are excellent, with absolutely no errors recorded.

It's good practice to continue periodically checking your disks and their SMART data, to anticipate future errors.

1. What is this bad block count and is it early or later bad blocks?

Others suggested it indicates bad blocks detected while the SSD was configured at factory. Which is weird and not common practice in the past where manufacturers tended to hide such defects, so I doubt this. And I also think that if we assume 257 grown defects, then it's not reason to say "your SSD is just fine".

If we indeed would assume 'early' defects based on for example Kingston documentation, we'd have:

If we however approach this from a different angle and assume 257 is remaining number of blocks reserved for reallocation then it seems to me the normalized value of 72 indicates that the drive has already been using blocks out of the spare pool, probably/possibly 28% of those.

For me personally this would be an unacceptably high number, and I would not call the drive 'perfectly healthy'.

No matter how you fly this and personal opinions on acceptable number of reallocated blocks aside, it appears the drive has been decommissioning blocks.

3. Are they excluded from I/O after being reported?

4. Sometimes when copying a single large file, the speed drops to just 2 – 3 MB/s for a few seconds and then again jumps to 200 MB/s. Is this because of bad blocks?

I'd take a look at bad block count immediately after such an event. If number happens to increase after such an observed slow down, then yes it may very well be related. SMART values gain meaning if you can link them to such a specific event IMO.

The speed drop in itself does not have to mean anything bad.

What is normal and actually highly recommended is that your SSD has "spare" blocks that can be used at some point if some blocks on your SSD go bad. Your software may have an unfortunate choice of name for these spare blocks.

What is normal is that a brand new SSD is already using some of these "spare" blocks. Producing an SSD with 100% good blocks may be very expensive compared to one with 99.99% good blocks, and it's you who would pay the price difference.

What is also normal is that during operation some blocks turn bad and are automatically and invisibly for the user replaced with spare blocks.

What is bad is when your SSD has so many bad blocks that it runs out of spares to replace them.

0
Should the Current Pending Sector value change during a format with bad block checking on?
0
Bad Block Handling in SSDs on Macs
1
New Samsung XP941 SSD showing values for "Used Reserved Block Count". Is this bad?
3
Is my SSD drive failing?
0
Bad block count (early - later)?
1
Do I have a bad SSD?
1
Basic SSD disk corrupted after a clean Windows reformat
1
SSD Great on paper but practically randomly slows