Why do my proxy settings keep changing?

I am running Windows 7 and a few times a day the "Use a proxy server for your LAN (These settings will not apply to dial-up of VPN connections)." under "Local Area Network (LAN) Settings" checkbox becomes checked seemingly on it's own. 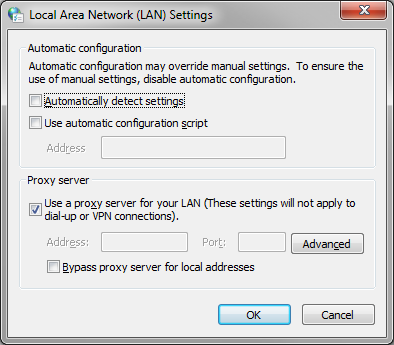 Am I pressing some kind of hidden keyboard shortcut accidentally? What sort of applications might alter this setting and why?

Unfortunately as this is a developer box, there's a lot of stuff that could be interfering, e.g. Visual Studio 2010, Windows Azure SDK and various browsers.

Has anyone else come across this?

Proxy Server settings being set automatically which is causing me not to be able to run manual test.

Can you turn OFF the Diagnostic Data Adapter "ASP.NET Client Proxy for IntelliTrace and Test Impact" and check if you are still facing this issue? To do this perform the following steps.

In the test settings wizard, go to "Data and Diagnostics Tab" and turn off "ASP.NET Client Proxy...". Click on Finish and remember to save the plan. Now execute the tests and see if you are still facing this issue.

It appears to be being caused by running unit tests in Visual Studio 2010.

Are you on a Windows domain? If so then your system could be pulling down a policy for proxy settings each time you logon.

I have seen infections change this setting within the last couple of months on one of my machines and several machines at work. I would run a full AV scan and check for Malware using two different scanners.

This happened to me on Windows 7 Enterprise. While attempting to install other software, something called RocketTab snuck onto my machine. It was running a program called Client.exe which constantly tries to make itself a proxy server so it can modify search results, etc. to whatever it likes.

I found this by using Task Manager to look for processes that I didn't recognize. I right clicked and selected to open the file folder. When the folder was Programs ... RocketTab, I was quite suspicious. Once I uninstalled RocketTab the proxy setting remained unchecked. There might be similar programs out there that try to do the same thing. Seek and destroy :)

Fiddler is another program that does this. See http://docs.telerik.com/fiddler/knowledgebase/proxy

My original problem was found when Google search function with Chrome environment with Window 8.1 became unreliable as it often returned message of "Webpage is not available with error code: ERR_CONTENT_DECORDING_FAILED". The first couple of searches were fine but once this error message appeared, I could no longer use Google search. This error message is not listed Chrome technical support.

However, it appears to be caused by sending wrong codes from my PC to the search engine at Google site. After struggling, I found it may be caused by wrong LAN setting in the Internet option: i.e. (1) "use a proxy server for your LAN" was ticked, (2) "Automatically detect setting" was not ticked. It should be wrong ways around, so that I reset to default condition: (1) use a proxy server... not-ticked, (2) Automatically detect ..... Ticked. The Google search function became improved but still returned the situation of the error after several test searches. I noticed it has time dependent for the re-occurrence of the problem.

I checked the LAN setting each time and found that the setting was automatically changed back. Eventually I used "Task Manager" to check currently running software which relates to Internet connection and found software called "BrouserSafeguard with rocket Tab" as stated in one of your answers. This seems to change back the setting automatically when it scans around every minute. This caused Google search engine but other search engines such as "Bing" and "Ask Jeeves" were not affected by setting in Chrome. This is neither malware nor virus, so that my Norton anti-virus does not detect it. I uninstalled it from "Control Panel" manually and the problem was solved. I thank you for your most useful answer in this site.

This worked for me http://www.grishbi.com/2015/02/ie-proxy-setting-keeps-changing/. Posting it here because none of the solution defined worked for me, and may help some one else. Most of the article are unable to find the root cause, however this one did.

I had the same problem. Turns it it was Charles that was setting my proxy. When the computer restarted after a crash, Charles hadn't shut down gracefully and therefore hadn't switched off the proxy settings.

Not the answer you're looking for? Browse other questions tagged windows-7 proxy internet-connection or ask your own question.

0
What keeps switching on my proxy settings?
0
Windows 8.1 keeps setting a manual proxy when I uncheck the option