I am completely baffled by a problem I'm experiencing with one folder on my PC.

Let's say I launch the common file dialog (e.g. "Save As"/"Attach File"/etc) and navigate to this folder using the "Libraries" tree on the left hand pane, i.e.: 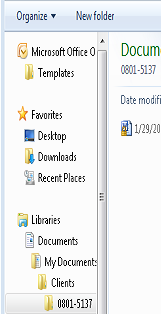 If I do this, I can find the files in this directory (note the presence of the file "Chris test 4"): 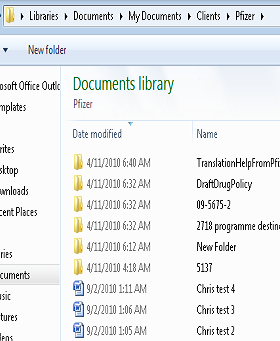 But if I instead click on the "Documents" library and then navigate to the exact same folder using the main pane on the right, the folder in question is missing various files and subfolders. Example here; note that "Chris test 4" is not in the folder, and that the sort order is also different: 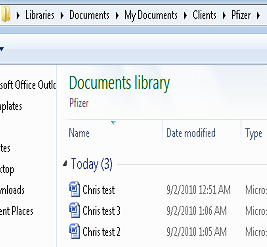 I've also noticed the following problem: if I click on "Documents" on the left and then click "Clients" in the main pane, I get a listing not of the subfolders of "Clients", but instead what looks like a listing of the hundreds of files in the entire "Clients" folder tree.

The problem only happens with this specific subfolder (other folders in this tree are OK), and it only happens when I'm in the common file dialog, not Windows Explorer.

I'm on Win 7; the folder in question is getting synced using Live Mesh, but I haven't configured anything specially in a way that would lead me to think the problem has to do with Live Mesh. Also, I can still repro the problem when I turn off Live Mesh.

I have been looking at this for hours and cannot figure out what is going on. I tried all kinds of sanity checks and keep results that don't quite make sense.

Can anyone make sense of this? 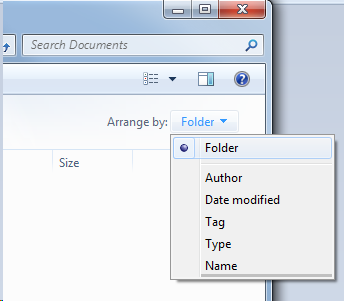 I have the same problem. And I can replicate it.

The problem comes about when I install ExamSoft SofTest. This is a "locked out environment" type of software used by many schools for their final examinations. The intent of this software is to provide a rudimentary word-processor and file delivery mechanism into which the examinee writes his exam answers; plus, most important, also to preclude any other software from running while ExamSoft's software is running, thus ensuring that the examinee cannot cheat by looking at notes stored on his computer. Somehow there's a conflict with user-ids, user profiles, or perhaps merely something about anti-virus, in the manner in which ExamSoft installs its SofTest.

I have determined to my own satisfaction, by means of installation, removal, and intelligent reversion to a variety of intermediary restore points, that the problem initiated for me when I installed ExamSoft's SofTest software. The problem goes away if I restore to a point in time immediately before installation with no other variation in environment, software, settings, or updates, so I feel pretty sure ExamSoft is MY culprit. Yours may be different. That's just the vehicle through which the problem gets delivered. I do not know the specific problem. It is somewhere in the Registry values (of course ...).

My experience is, that my Libraries are intact and not hidden, and are visible and operate properly in their own folders (in Windows Explorer). But in most programs and applications, they don't work properly. If a dialog is used in, for example, MS Word, to open or save a file, then the names of the Libraries do appear, but they cannot be further navigated. This problem exists in any Common File Dialog (open, save, save as, attach, etc.) in any program that is in a Program Files sub-folder, but NOT for any program that is in the Windows sub-folder. So, Notepad (which is in Windows folder) f.e. can use Libraries correctly; but MS Outlook or Firefox cannot. In the broken File Dialogs, the Libraries appear but seem to contain no files. Oddly, if you right-click in a Files Dialog on a seemingly empty Library, the subsequent Libraries Properties indicate that the Library does have contents, but do not show (or allow modification to) the contents. In other words, for most software the files in the Library are "there" but are not "visible" or "viewable" or "usable" via the software; but for some software (including Notepad and Explorer) the Libraries seem quite normal.

I haven't found one. Trying anything akin to re-establishing the default Libraries, or somehow in another manner removing or disabling and then re-installing the Libraries, fails. I've been through some Reg-Edit based solutions that I found by Googling across the 'net, but none have been effective. One other oddity is, that I find to my surprise that I now lack privileges to modify one of the Library registry keys even though I'm king-god-administrator of my own machine and have no other user account profiles running on it. ExamSoft has decided (probably in the name of preventing cheating during exam time) to lock me out of certain access privileges. I do not approve but, because I must use ExamSoft, I have no choice.

I won't dicker with it until after the exam in question, which takes place in late February, so that I don't rouse the alarm of the anti-cheating device. I'll just live with broken Libraries until then. Then I will uninstall the ExamSoft product and perhaps undertake a system-restore all the way back to mid-December (and have to live through re-installing all the intervening updates, yeesh ...).

Sorry to resuscitate an old thread. I feel fairly confident in claiming that this arises due to installation of the "exclusive" exam-environment software on my machine (Windows 7, HP relatively new laptop, all updates installed). I am not interested in a foundation-level solution, since editing Registry keys is really beyond what anyone should have to do simply to make expensive end-user-friendly software operate properly, but if there's a quick tweak (something like, "Re-Install Default Libraries", but one that works) I'd be happy to hear about it.

I am also experiencing this problem. What I guess is that the file is just newly created but not modified before. The only workaround for me is arranged by Folder and in detail view click date modified.

I don't like the fact that the files that do show up in the 2nd screenshot have the title of "Today". Is it possible that other files are not showing because they are not from "Today"? You might follow the article Free arrange of files in Windows 7 to modify the sorting options of the folder so to avoid this funny display. I wonder why it's there at all.

Otherwise, this seems to be a problem that had many users of Windows 7 scrambling after a solution.
I have found the following suggestions:

I have not seen anything really like this posted anywhere. Libraries are an abstract so they use XML meta-data to represent the file whose actual location could in any folder that is included in the library. I think it may be possible that Live Mesh accessing the file prevented it from getting added to the library. You might try turning off Live Mesh, make some small modification the file and see if it then gets added. I don't use libraries simply because they are an abstraction - in fact as much as i like Windows 7 I hate Libraries and the new Explorer and now use xPlorer2. The other suggestion here - trying to change the view by may also yield some results.

I have personally not seen this before and cannot recreate the issue.

I would first start as Harrymc said and get rid of the sort by as this may be confusing things - however I have seen that all files are from the same day.

Next, I would delete the documents library and then recreate it by right clicking on the Libraries object on the left hand bar and choosing the Restore Default Libraries option. 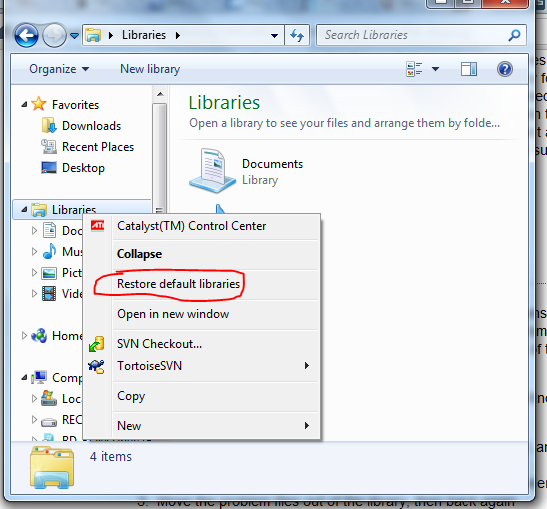 Lastly, in case of some sort of file corruption, you may want to quickly run a chkdsk on your hard drive to rule out problems.

Not the answer you're looking for? Browse other questions tagged windows-7 windows windows-explorer or ask your own question.

2
Windows “save” dialog listing files in reverse alphabetical order by default
10
Display File Count and Subfolder size in Windows Explorer
17
Can I change the system's “Browse for Folder” dialog globally?
2
Why is my library/Documents shortcut showing all files from all subfolders in one flat list?
1
Any commands to tell File Dialog windows to go to current file folder?
5
Windows 10 not showing the same folders in File Explorer and Internet Explorer file selector
4
How do I expand all folders in the Outlook “Go to Folder…” dialog?
5
How do I do a search in File Explorer that includes subfolders of zip archives?
0
Adding a folder in Windows 10 Explorer to the Quick-access/favorites to access it with only one click