Which MS Office version is the most Netbook-friendly? [closed]

Ask Question
Asked 10 years, 6 months ago
Active 10 years, 3 months ago
Viewed 17k times
5
This question is unlikely to help any future visitors; it is only relevant to a small geographic area, a specific moment in time, or an extraordinarily narrow situation that is not generally applicable to the worldwide audience of the internet. For help making this question more broadly applicable, visit the help center.
Closed 8 years ago.

My sister has just bought a mid-range netbook, not sure about the exact spec. We're trying to figure out which version of MS Office would be the most resource friendly. The current options are Office 2003, 2007 and 2010, where 2003 is probably a lighter installation, 2010 is the most advanced, and 2007 is a little bit of both. I can imagine 2003 would basically require less resources, but then it is probably not optimized for modern resources. 2010, OTOH, might be too demanding for a netbook.

As for her needs, she'll probably be using mostly Word, and maybe PowerPoint for stupid viral slideshows. No real office to run. So the flashy new 2010 features are probably going to be redundant.

As I see it, the most important thing is that it doesn't hog too much of her poor 1GB of RAM, doesn't take a lot of disk space, and that security fixes are still provided for the next few years. Which version would you recommend, then?

So even Office 2010 is not that resource hungry. I would say go 2010 if you can afford it, because of the improved functionality, features over older versions and general ease of use. Also I can say from personal use, it seems to open up and generally run faster than Office 2007 did on my machine.

I wouldn't reccomend 2003 for the lack of compatability with newer versions of Office, and the fact that I doubt it will be supported by Microsoft much longer.

Above all that though, I would say go with whatever she is used to. If she uses say 2007 at work or school, then get that version as it will be what she is most familiar with.

If you could find out a few more specs like how big the hard drive is, what speed the processor is and exactly how much ram it has, it would be good so you can check it can definataly run Office 2010.

You could try using the online suites – Google Docs will let you edit documents, spreadsheets and presentations online. Microsoft too provides an online Office Web Apps companions to Microsoft Word, Excel, PowerPoint, and OneNote to access, view, and edit documents directly from a browser.

But any online suite option assumes you have an Internet connection – when traveling that’s not always the case or the price of connection is too high. You should be able to use the computer anytime and not be reliant on an internet connection. That is why you may want to go with MS office.

Virtually synonymous with desktop productivity tools, Microsoft Office is not just the market leader, it’s the one product that nearly every user has on their computer. The creation of documents, spreadsheets and simple databases are part and parcel of a day’s work. Word, Excel and Powerpoint are the most well known Microsoft software programs among students on all levels. More info about office for netbooks read this http://www.netbooklink.com/netbook-resources/microsoft-office-2010-home-and-student-edition-for-netbooks

My suggestion would be to skip installing Microsoft Office on the netbook and use Google Docs instead.

I have an account set up for my son (6th Grade) and he uses it for all his school assignments. Never have to worry about computer crashes or deleting something by mistake.

The screenshot below is from my Google Apps for business account but the standard Google Docs interface is the same. 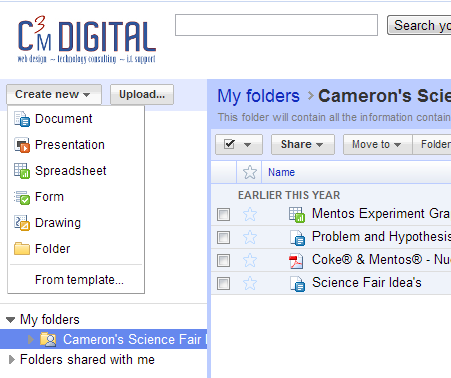 As for her needs, she'll probably be using mostly Word, and maybe PowerPoint for stupid viral slideshows. No real office to run. So the flashy new 2010 features are probably going to be redundant.

Google Docs has a word processor and a Power Point like presentation creator that can export the file as a .ppt

As I see it, the most important thing is that it doesn't hog too much of her poor 1GB of RAM, doesn't take a lot of disk space, and that security fixes are still provided for the next few years.

Google Docs uses 0 disk space, uses the same amount of RAM as her browser would, and is very secure.

The BEST feature is IT'S FREE!

Not the answer you're looking for? Browse other questions tagged performance microsoft-office netbook resources or ask your own question.

5
Most user-friendly (and speediest) Linux flavour for a netbook
3
Is Ubuntu Netbook Remix actually lighter than Ubuntu Desktop?
0
“excel stopped working” message on Windows 7?
3
How do I get a PDF link in a Word document to open in the default browser?
1
Office 2010 save as shortcut text is white, missing shortcuts I've added
0
Cannot launch every office 2007 product
1
Slide show running on a secondary monitor pauses when focus changes
0
How to run newer software on older operating systems?