Process Explorer not showing the biggest user of my RAM

Does anyone know why Process Explorer might show these weird values for memory usage of my Virtual Box instance?

Here are the real numbers: 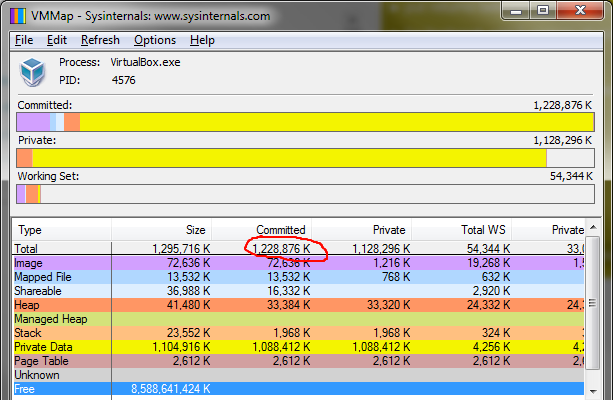 But here's what Process Explorer is showing: 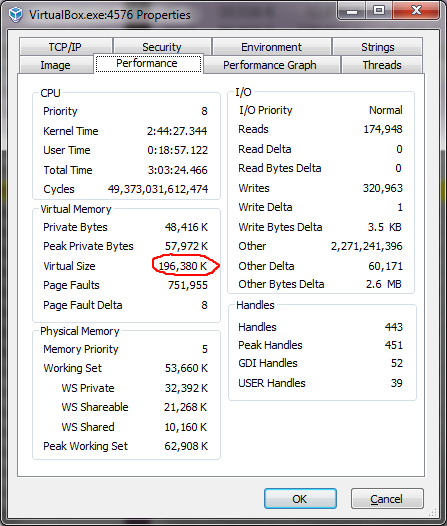 So the process has committed 1.2 GB of VM, 1.1 GB of which is private. But Process Explorer is only seeing 196 MB of VM, and only 48 MB of private memory! What's going on here?

EDIT: This memory is not just reserved. It actually gets used: 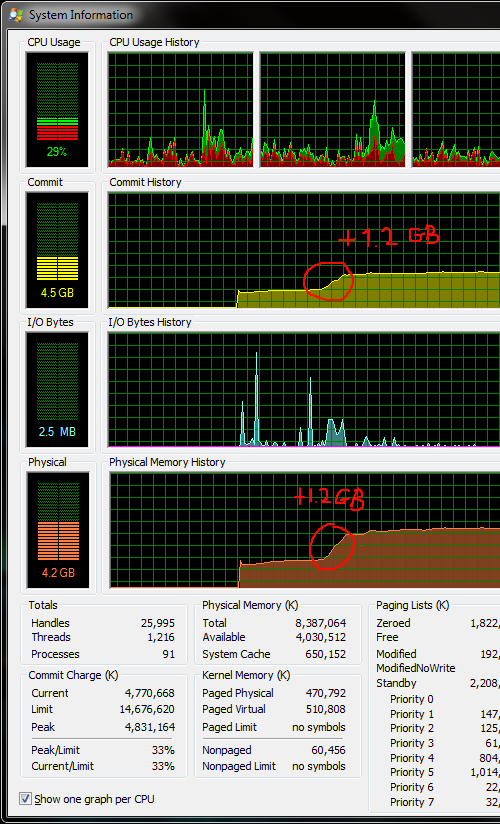 Mark Russinovich has kindly explained that this occurs because VirtualBox locks a large amount of memory, which requests the OS to keep it in the working set.

However, if you just try VirtualLocking a bunch of RAM, you won't see this. All that RAM will be happily accounted for, like it should be. So it's something else about the way VirtualBox allocates this memory. Incidentally, it also affects ProcessHacker.

The weird thing about this is that ProcessHacker enumerates all the allocated memory ranges correctly, and simply adding them up will give the correct value, however the counter reported by the OS is wrong. By a few GB. Not good!

I'm calling this a quirk of Windows RAM reporting. I'd call this a bug, but it's probably been around for at least a decade, so by now I guess one can call this expected behaviour... one that isn't properly worked around in Process Explorer nor Process Hacker.

Using SysInternals RamMap I think you can see the ram is recorded as 'DriverLocked'.

However I've no idea how you actually work back from this to the driver which locked it. And importantly, the driver is not going to be the VirtualBox program, but rather a driver that VirtualBox installed and uses.

If simply shutting down virtual machines doesn't free up ram from the 'DriverLocked' pool, then you can use a tool like AutoRuns to see what drivers are loaded at startup and disable them. It's a bit of a manual process so would be really interested if anyone knows how to tell what drivers have locked memory.

VMMap might have a bug that makes Committed include discarded pages or pages in the swap file.

Thus now it looks like inactive memory... It's allocated just as a reserve (or as a bug).

The Working Set only contains active memory, VMMap and Process Explorer do show the same WS...

From RAM, Virtual Memory, Pagefile and all that stuff :

Memory, Committed Bytes: This is a measure of the demand for virtual memory. It shows how many bytes have been allocated by processes and to which the operating system has committed a RAM page frame or a page slot in the pagefile (or both). As Committed Bytes grows above the available RAM, paging increases, and the amount of the pagefile in use also increases. At some point, paging activity starts to significantly affect perceived performance.

So I do believe that the Committed Bytes amount has nothing to do with VirtualBox - it's just the sum-total of physical RAM pages of all running processes in the system. In that case, the data returned by Process Explorer is correct.

Not the answer you're looking for? Browse other questions tagged virtual-memory process-explorer or ask your own question.

1
Enormous virtual and private memory usage on a Windows 7 x64 Installation
6
How is RAM reported and represented in Process Explorer?
18
98-100% memory use, no process uses more than 25MB
2
Why is Process Explorer reporting activity in non-existent dedicated GPU memory?
1
Process Manager/Hacker show already closed processes in Windows 8.1
0
Virtual memory running out when there are free physical memory?
1
How to find what is filling up my pagefile
3
Process Explorer Reports Processes with 2TB "virtual size" in Windows 10?
1
Commited memory keeps going up