I have heard some people say that Foxit Reader is adware. What exactly does it try to do and how much can I disable?

The following is an article from here, I have put it as it is in the site.

After seeing the Ask toolbar offered, I chose to do a custom install -- just in case Foxit defaulted to including anything else I didn't want. I noted eBay shortcuts and unchecked them, and then got a rather rude surprise (take the jump to see what): 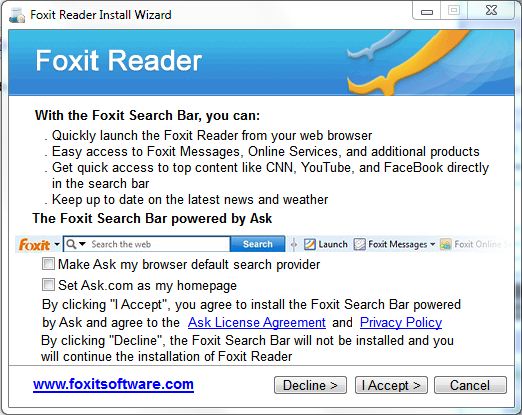 As you can see, I don't have any boxes checked on this page...A few clicks later Though the boxes are unchecked, you've still got to click decline in order to proceed without getting the toolbar. Counterintuitive to say the least -- I'm kind of used to needing to click accept in order to continue the install process. 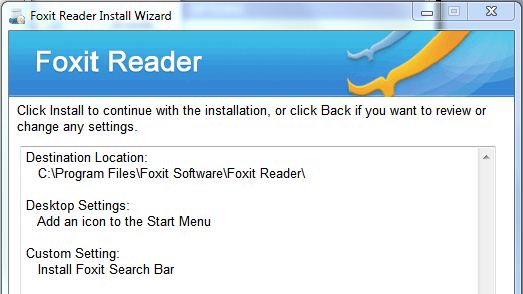 ... and the installer tells me it's going to install the Foxit Search Bar. This time, however, there's nowhere for me to uncheck the toolbar to prevent its installation. I tried the install twice, and sure enough -- both times I received the Ask toolbar.

Yes. Foxit used to be awesome, now it got search toolbars. Ads i'm ok with, but adding browser toolbars by default is a filthy trick.

Try Sumatra PDF - it's open source and fast and is what foxit used to be.

Foxit reader contains a small but prominent ad on the tool bar that advertises their commercial products. This is only fair, seeing that you are getting the reader for free.

If this bothers you, you can remove it easily by right-clicking on a blank area of the toolbar and then uncheck Advertisement on the context menu.

In version 3 of Foxit reader there was even an "Advertisement" entry on the View menu to turn it off, but this was removed in version 4.

You can avoid the installer by using Foxit Portable.

Previously I used the stand-alone executable from their download page, but I don't see it now.

I used it for a while then got a new PC and noticed the ask toolbar crap. While put off, I understand the reasons and simply unchecked the options to install any toolbars, etc.

While I was disappointed they went that route, to me it's still the best PDF reader. It also taught me to slow down during installs(even of software I'm familiar with), hitting "Next" 5 times in a row can get you something you don't want...

I use it, I refused the toolbar, no ads. I like it.

Foxit Reader itself is not adware. It is a PDF reader similar to Adobe Reader.

However, the installation process for Foxit Reader is deliberately designed to trick people into installing some optional adware.

Not the answer you're looking for? Browse other questions tagged foxit-reader or ask your own question.