How can I setup an array variable in a DOS batch script? I would like to load it with a list of file names to process. I really would like to keep this as simple as possible. Thank you.

I figured it out:

I did something like this several years ago, so it just took some figuring out. (btw, I hate reinventing the wheel.) Now that it's posted here, hopefully others will find it useful too.

Yes you can do arrays in batch. While they aren't exactly like arrays in C or VB, you CAN do it:

From Jakash3's Blog, Arrays in Batch describes how to emulate arrays in the command prompt.

A batch file named array.bat is included in the article, that contains a library of functions used to handle arrays. You will need to select the the text in the article and paste it inside the bat file.

For example, the following test script: 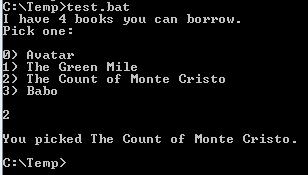 This populates an array and prints it

You could use names1 names2 names3, rather than names[1] names[2] names[3] by writing names!i! instead of names[!i!]. It produces the array by generating variable names. There isn't an array structure in batch. But it is as neat as any array structure, and populating or printing looks exactly like how one would populate or print an array in a proper language(that actually has the array structure!)

The setlocal enabledelayedexpansion enableextensions with the !var! rather than %var% is necessary to prevent odd behavior, so that variables behave properly when within a FOR or an IF. It's an oddity with batch files. See set /? where that is mentioned further.

This is what populates the array, and is pretty straight forward to anybody that knows about arrays. You could also do names[0]=bob names[1]=tom names[2]=joseph though one of the beauties of an array is the ability to populate an array with a loop, which is what i've done here.

this is a small debug file i made a while a go to test te array from my tic tac tow game in BATCH / CMD. it can read and write to and from an array whitout going to big and complicated on the code.

using it is simple:

Writing to an array

Reading from an array

For what you want to do, how about using an input variable for each file name, which you can pick up with the %1 %2 etc. variables eg: mybat.bat file1.nam file2.nam etc..

You can then use these variables in a loop but only need to use %1 as the main parameter as you can use SHIFT to bring the other variables into the %1 'position', having a test for null (end of variables) with something like IF "X%1" == "X"

If you save the list of files to filelist.txt, you can get FOR to read and process each line of the file, such as

to print each line of a file (up to the first "|" in the line. If you don't specify your own delimiter, space and tab will be used, so unless your paths have no spaces, you need to specify a character that will not appear in the file to get complete lines).

In one of your comments to an answer you say,

I am doing development work, and due to the complex nature of the application every time and want to test a build (which is often) I have to copy five files from the build binary directory to the install binary directory. This gets tedious. Right now, I have the file names hard-coded into my batch script, but I would like to put them into an array to make the script easier to maintain.

I believe that what you are looking for is a Makefile, and possibly cygwin to give you a decent shell (bash, or whatever your flavour).

Replace strings and letter in text.

Try for loop by expanding text to a for body and replacing var with var. Drag and drop text file so %1 is user input by invoking set command.

Something like this in a batch file? Select a file in a folder. << is comment, no code

You can't really do an array in the command prompt (and also it's not really DOS unless you are running Windows 3.1). However, you can do set-based processing with the FOR command.

Something I learned the hard way with FOR - you need to use a SINGLE CHARACTER variable as your cursor!

By default FOR handles set or just files:

or, for just directories:

Not the answer you're looking for? Browse other questions tagged batch-file shell-script disk-operating-system or ask your own question.

10
DOS Batch file to find "new" files by date
6
how to access variables that are set in a different windows batch file?
0
Parent process details from the batch script - find out what called the batch script
0
Batch Script Doesnt Delete Folders in a Folder .txt File :(
1
How Can I convert My Batch Script to an Executable and still run like a Bat Script?