Can I access Microsoft Outlook PST archives with any other tools?

I would like to access my Microsoft Outlook archives (pst files) from machines that do not have Microsoft Office installed. Is that possible? Think of several years worth of PST archive files.

My basic criteria for access are as follows (in decreasing order of necessity),

If you know of tools that will work with some version of Outlook PST files, that is fine.

If you know of tools that are based on Linux rather than Windows, that is fine too.

In order to facilitate interoperability and enable customers and vendors to access the data in .pst files on a variety of platforms, we will be releasing documentation for the .pst file format.

The .PST file is a proprietary format, and AFAIK, can only be used by Microsoft products.

There are ways to get around this, such as using Thunderbird to open the file and creating a new archive based on the mbox format.

This initial conversion can only be done on Windows because it uses a built-in mail API to access the information, but once you have converted the archive it should be accessible by most email tools, both on Windows and Linux.

libpst is an open source library which can be used to convert a PST file to a collection of mbox files. The latest version now works with the Outlook 2003 format, and it does not require Microsoft Outlook to be installed.

The readpst program is part of libpst, and is packaged for a number of Linux distributions including Ubuntu, RedHat, and Fedora. There does not appear to be a Windows executable available from the primary libpst site so you might have to compile your own from the source code if you wanted to use it on Windows.

There is a tool called EX-Merge that allows you to extract all of the contents of an exchange mailbox. That one is only useful if you have an exchange server to connect to. Another program is a third party conversion utility. It can convert PSTs into a few different formats.

PST Walker lets you view and export items from a PST file. 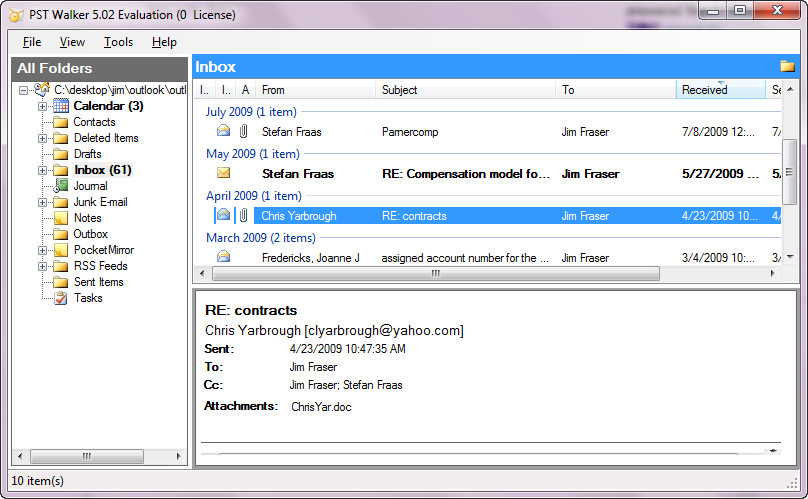 It does not require Outlook to read a PST file. Costs $49.

I don't believe that you can view PST files without Outlook.

If the PST file is corrupt - something that happens with monotonous regularity - you should run:

Run it a few times to try and get rid of the corruption.

To prevent (actually it only reduces occurrences) corruption of PST's:

PST files used to be JET database files though I don't know if that is still true. When they were, in theory you should have been able to use a database tool to read them. Never actually tried though.

I've used it to read PST files on machines that don't have Outlook (usually to find an important email or contact), although because you have to 'search' for the item you want to read it's not great if you just want to browse.

Not the answer you're looking for? Browse other questions tagged linux windows pst or ask your own question.

2
How can I access an Outlook 2003 PST file without using Outlook?
5
Access or import an Outlook 2003 .pst file without Outlook
1
Associate email account with "Personal Folders" Outlook data file?
6
How converting or importing outlook PST from old format to new unicode format
13
export emails from PST file in Outlook 2010 to Thunderbird
3
Microsoft Outlook: Export list of currently opened PST files
1
Does copying/moving emails in Outlook (2003) from one PST to another corrupt the new PST file?
0
How to install Microsoft Outlook 2007 (yes, the old microsoft outlook) with no .pst file