How do I find and replace a character in filenames in Windows 7 using Explorer?

I want to replace all the underscore characters (_) with a space () in a filename.

How can I do this quickly, when I have lots of _ characters to replace?

vbScript should do it for you. Create a file called "rename_underscores.vbs" containing the following.

Make sure the folder name is correct. (In the example, I've used c:\test) And then double click your file to do the renaming.

As others have mentioned, there is no way to do exactly what you want without using a script or batch file. For instance, in PowerShell you can do what you want quite easily:

Just be sure to replace "C:\Users\MyName\Documents\MyDirectory" with the path to your directory.

For more detail and other options, including some things you can do using just Explorer, see here: http://www.howtogeek.com/111859/how-to-batch-rename-files-in-windows-4-ways-to-rename-multiple-files/

I recommend using a 3rd party tool like Bulk Rename Utility. It's free and it has an installer less than 1 MB.

This is within the realms of a dos bat file. Create a bat file (New->Text file, rename extension to .bat) then copy the blue sections below into it.

I'll split it into sections and explain what it's doing.

Print the current state of the directory for comparison later

List the files in the directory, then for all the ones that contain an underscore and end in .txt, call ProcessFile on them.

The syntax "str=%str:x=y%" replaces instances of x with y. In this case, we're replacing "_" with nothing

Now it just prints what was changed so we can confirm it's working as expected;

Results (Not part of the bat file)

Here is my batch rename ruby script. I haven't used other batch renaming tools but I think my script is very easy to use and very versatile. Here is the command for your case:

I have setup my windows environment in such a way bren.rb can be executed as an executable from any directory.

Windows-based renaming tool, the most powerful there is, and it's free. http://www3.telus.net/pfrank/

This doesn't explicitly answer the question ('.. in Explorer'), but I found the most useful software to do this was Adobe Bridge (Free) 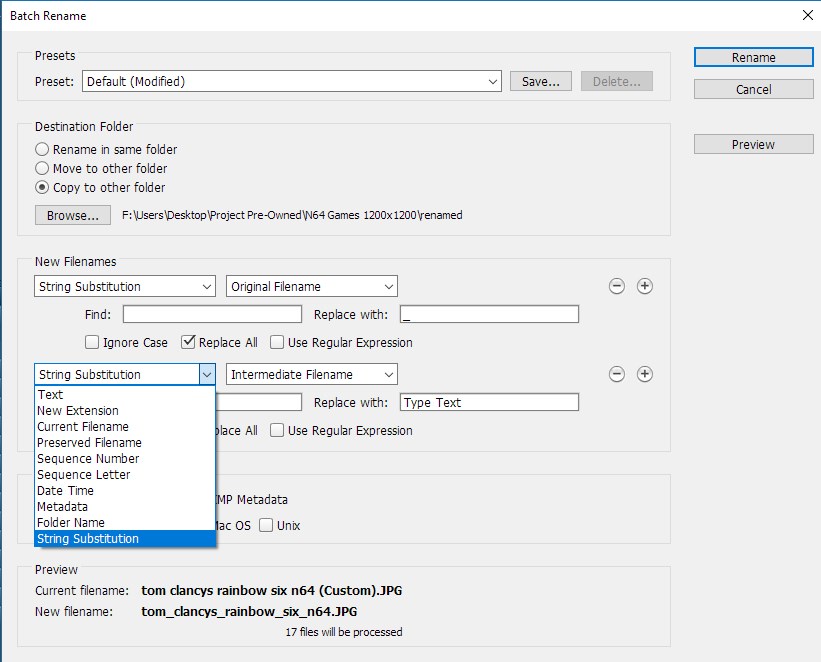 Not the answer you're looking for? Browse other questions tagged windows-7 rename filenames find-and-replace or ask your own question.

4
How do you quickly remove underscores from folder names?

3
How to batch rename files copied from OSX to Windows with ':' in filenames?
3
How to replace html using dreamweaver's "find and replace"?
3
Notepad++ find and replace expression help
6
Renaming/deleting impossible filenames in Windows 7
0
Replace duplicate words in filenames
1
Find and replace using wildcard character in Notepad++
4
Find-And-Replace Any Selected Text
0
How can I Remove a certain character from multiple filenames in windows 8?
1
Excel 2016 Find and Replace with miscellaneous character