I'm looking to throw together an ultra-thin, programmable, "display" that's sufficiently light weight so as to be wall-mountable.

The best thing I've found thus far is a Fit-PC2 (via this question), but that's just the PC portion and even then its over an inch thick.

So basically, what I'm looking for is:

Things I don't care about:

One final caveat, the display needs to be mostly "display." Borders (or a "frame") - in moderation - are OK, but no controls.

It'd be great if I could just stick some components together (or buy it pre-assembled) but I have no objection to breaking out a soldering iron if need be.

I build one a few years ago. It doesn't necessarily have to be ultra thin. I used an old laptop I got for around 50-100 bucks on ebay. I took the screen off the hinge and turned it around, if it were a tablet. I then mounted it inside a shadowbox frame and cut matting to cover up the edges around the screen.

I turned an old Thinkpad 600e into a photo frame a couple of years ago. Biggest expense was getting a nice wooden frame to mount everything in, so it looked nice.

Took the surround off the screen and laid it on the back of the laptop, facing out. Used FreeDOS as the operating system, plus a simple slideshow app I found online. Have to resize the photos to match the screensize (using Picasa) and upload files manually, but it works a treat.

... Even though the display is only 256 colours, it's good enough. I've had colleagues at work think the photos are real, until they work out the picture is different every time they look at it.

Things I'd do differently ...

... Without USB support, the only way to copy photos on is via rewritable CD. A bit of a PITA - having it on the network (wired would do, wireless would be better) would be much easier.

... I'm worried about the hard drive possibly not spinning up next time it gets power cycled. Having something flash based to store the photos together with an OS that does good power management and turns off the hard drive when not in use would last longer (and use less power and be quieter).

So, I'd suggest you find yourself an outdated (and therefore cheap) laptop that still works.

I'd look for one running Windows XP(*) as you get all the good application and hardware support, and there are lots of old laptops that will run it just fine. Set up a DropBox account or something similar, put it on the network and forget about it. Drop the photos you want to display into the dropbox and watch them come up on the screen. Use a photo based screensaver to show the photos - Picasa has one, but there are others.

(*) Yes, Linux would work just fine - but I don't have the skills to make that work without spending too many hours learning new stuff. YMMV.

Have a look to chumby guts 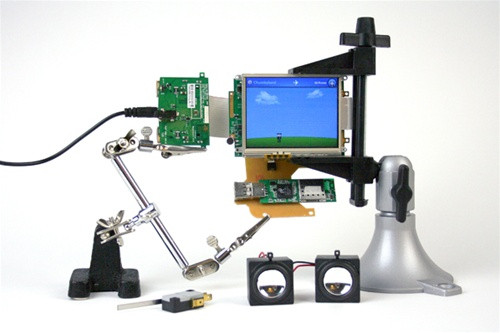 I bought an iPad and ended up using it for exactly this purpose, after two weeks of "oh man this is exciting". Beyond that it became "oh man, in what way is this worth $800?". Of course you can get the $500 model instead for around $600, but they're probably showing up on Craigslist by now.

In my case, I returned it after 30 days (Colorado law is longer than Apple's 2-week return period) and paid a 10% restocking fee. I believe I got my $80 worth.

Edit: Having reviewed Apple's processes for getting software onto the iPad, I wouldn't exactly call this a "Proper Computer", but if you want to cobble something together and can learn C++ or Objective C, I'm sure you're resourceful enough to figure it out :)

Edit2: Clearly buying an old laptop is a better option, but this does fit the requirements as you specified them.

I used my old Dell D505 and fitted in a nice wooden frame. After installing ubuntu on it, and setting it as a UPNP renderer.

I was mainly using on my desk, so I wish it has touch screen :) But if you are mounting on a wall, I guess touch is not necessary.

hackaday has a few relevant tutorials, their latest and greatest is as follows:

We set out to build a 100% DIY, scratch-built digital picture frame. Our frame has a 12bit color LCD, gigabytes of storage on common, FAT-formatted microSD cards, and you can build it at home. We’ve got the details below.

Also, lots of examples of things others have done on Instructables:

One personal caution: you REALLY want a quality LCD for this, so avoid TN panels like the plague.

Not the answer you're looking for? Browse other questions tagged display or ask your own question.

3
Monitor and computer not working together
0
No picture with Sony pcg 252L
1
Arch Linux frame buffer changes?
2
Is the response time of a digital monitor important?
5
Bigger picture on a computer display
1
Philips 190V LCD Monitors - Turns off and then back on loop
0
Geforce digital vibrate not running
3
What kind of display magic is this? Monitor shows picture only for few seconds
0
Relationship between refresh rate and frame rate