What is the maximum temperature my CPUs can reach before causing damage?

After my BIOS reset itself for some reason, my computer/cpu fan is running non-stop, so I installed speedfan so I can monitor the temperature of the four cores I have.

I was alarmed to see three "flaming fire icons" and assumed these cores were too hot but after some research here and here, it seems that maximum CPU temperatures are 60C - 70C and that 50C - 52C is still quite normal. 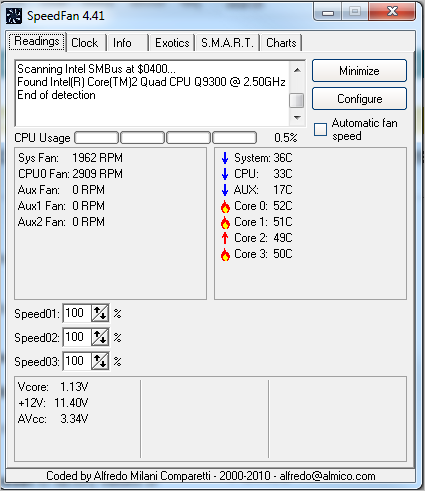 Here's the basic info about my computer hardware:

Can anyone assure me that as long as the temperature of my cores stays below 55C they will be alright?

According to Intel your processor Tcase(*) should be fine at temps up to 71.4°C

(*) Tcase temperature is measured at the IHS or that metal casing protecting the core on your processor, which is what your BIOS will report. Core or Tjunction temperatures will show a higher temp.

This system is three years old and more often than not spends one or two days encoding lots of stuff.

below 55oC is good for your CPUs.

Higher temp, your mobo will turn off your PC immediately so don't worry :)

Not the answer you're looking for? Browse other questions tagged cpu fan temperature or ask your own question.