Firefox Sync on Firefox 4.0 Beta 6 won't sync passwords or history. Do I need to file a bug, or is there a way to fix it?

I'm not sure if this is something that I can fix, or if I should file a bug on Bugzilla:

I successfully use Firefox Sync on several instances of Firefox, syncing bookmarks, passwords, history and tabs. The four Firefox instances I'm using successfully are all version 3.6:

When I try to sync it to Firefox 4.0 Beta 6 (the version from portableapps.com) on Windows XP, it will successfully sync bookmarks and tabs. However, it fails to sync passwords or history. No errors show (not even in Firefox's Error Console), and the sync completes quickly.

I've tried all of the following:

Here's a screenshot of my current sync settings: 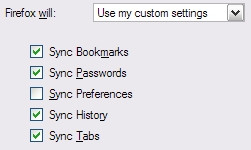 I know I'm dealing with a beta here, but I'm not yet sure that I should file a bug about it, either. I haven't been able to test it on an install (I'm using the portable edition because I don't want to risk my current installs of 3.6). Also, I suspect it might have something to do with the format of my data stored in the cloud (I've used the same account since the almost-early-adopter era of Weave).

You should have a feedback drop down box in your toolbar; I have 4.0b6 as well. Click on it and choose "Firefox makes me sad because..." then input that stuff you mentioned here.

However - I don't know if this is your issue - but I had the Firefox Sync Plugin, which I uninstalled, now that Sync is a part of Firefox itself.

Not the answer you're looking for? Browse other questions tagged firefox sync or ask your own question.

14
Sync Chromium without google account
2
How to sync all data (bookmarks, passwords, history) between 2 browsers?
2
Is there a way to see and manage the data in my Firefox Sync account?
2
Does Firefox support one-way sync?
0
Firefox sync without browser restart and external services
0
Firefox was restored to default after update
1
Start multiple Firefox (Portable) instances doesn't work using -no-remote switch