What is remoting as offered by Google Chrome?

Since the past few dev builds, Chrome has an option to enable Remoting in the about:flags section. What is remoting ? 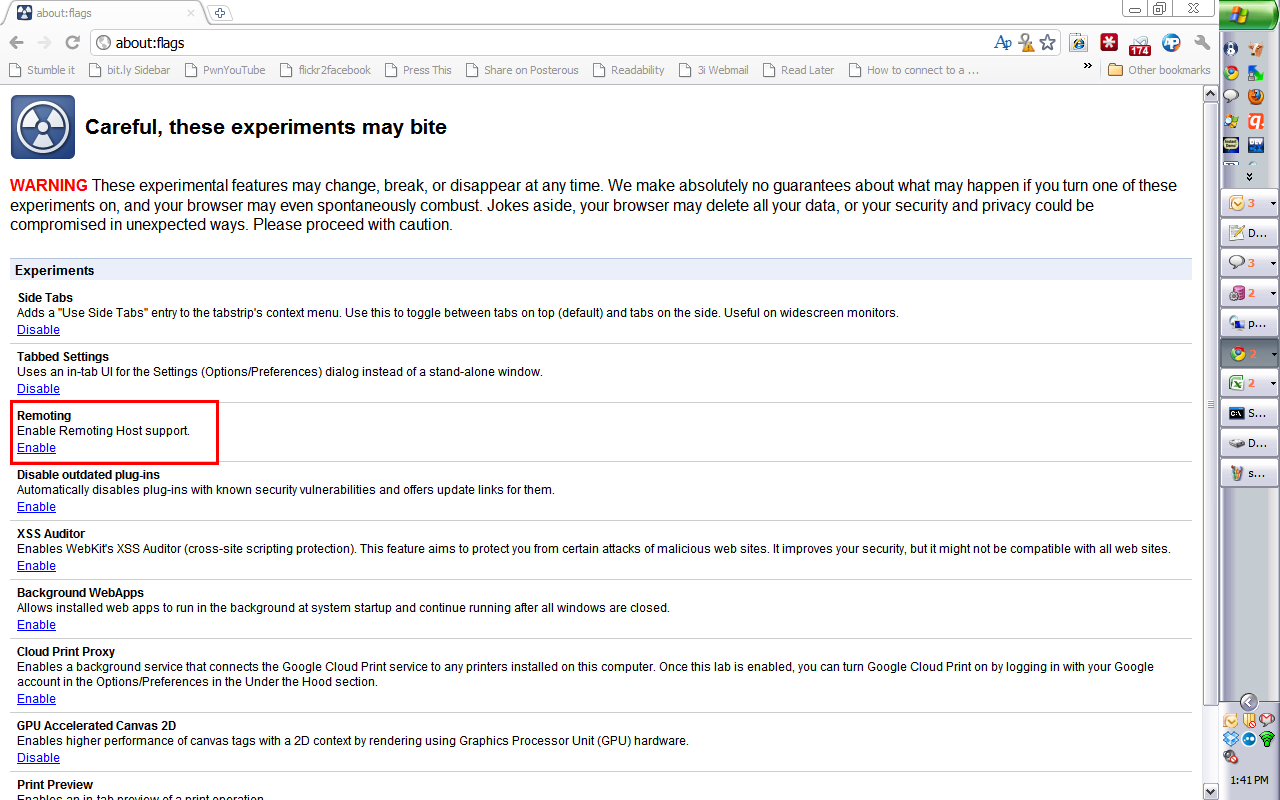 Google's first desktop operating system is very close to launch. Chrome OS is maybe a couple of months away now so its main components are falling into place by this time.

One of the most interesting features, the possibility to connect to remote applications via the browser, chromoting as it is dubbed internally, has now landed in Chromium and the Google Chrome Canary builds.

If you like to stay updated with the latest developments for Chrome and are using either Chromium, the open-source version on which Chrome is based, or the Chrome Canary build which is generally more unstable but also ahead of the dev channel builds, you'll be able to access the new feature by visiting about:labs.

The labs section was introduced recently to Google Chrome as a way of testing experimental features that shouldn't be turned on by default for the majority of users.

After you enable Remoting and restart the browser you'll see a new entry in the Wrench menu called "Set Up Remoting." Clicking on the entry will open a pop-up window asking for your Google account credentials, similar to the way the sync feature works.

However, for now, Remoting doesn't do anything beyond that, even if you fill in your account data nothing will happen. This should be expected for an experimental feature especially one that Google hasn't talked about publicly too much.

The goal of the Remoting feature, from what Google has said so far, is to enable Chrome and Chrome OS users to connect to "legacy" apps, which is what Google calls desktop applications, and run them inside the browser.

In a sense it's similar to remote desktop applications present in most modern operating systems, though the Chrome feature may be geared towards individual apps rather than the whole desktop.

Since it's now being included in Chromium and the latest Chrome builds, the team is probably close to completion and we should get an announcement or at least a fully functioning feature in the short term future.

Currently you can use Windows as host and linux as client for remoting aka chromoting.

Now relabeled "Remoting," the feature is probably closer to running an application via Terminal Services or by first connecting to a host machine by using RDP or VNC.

Sorry, but I thought those bits were informative indeed. If you want to know about the underlying technology, then that's certainly not known from those pages. But as for "what it is" as in "what is it for", then that is answered to some extent by these.

IMHO Remoting is flavor of approach demoed there. It is just Remoting is not production ready and to make Chrome OS more appealing to corporate market Citrix Reciever approach is provided.

You can now install the Chrome Remote Desktop application (still in beta) and try it for yourself:

Not the answer you're looking for? Browse other questions tagged google-chrome browser or ask your own question.