Hard Drive read speed below 2 MB/sec. Normal? How to improve?

I have a relatively new Western Digital 1TB EADS hard drive (SATA) as my secondary drive. I've always found that accessing certain folders with lots of content (e.g. /Music/) was slow. I ran a few diagnostic tools (chkdsk, HD Tune, HD Tach, HDDScan) and haven't found anything. The drive is defragged and cool.

HD Tune reports a plateau read speed of 1.8 MB/sec. This doesn't mean anything to me. Is it slow? Moreover, when comparing to other HD Tune graphs, mine seems very unusual and appears to have something limiting it. (see the image below.) (see many other HD Tune outputs here: http://goo.gl/dgcH7.)

Q: Is there something wrong with my drive such that I should replace it? Or are there settings that I can try to tweak to remove this ceiling transfer speed?

Background: I recently upgraded to an Athlon II X4 2.9Ghz with 4GB RAM on 64-bit Windows 7. The machine is probably not the problem, as the performance is unchanged since the upgrade from an older XP machine. No viruses/spyware/malware/etc... The drive is on ATA channel 0 with the primary HDD, in Ultra DMA Mode 6 (DMA enabled.) 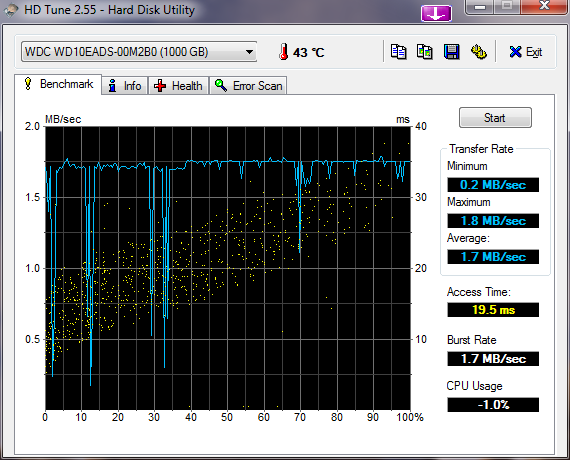 Update: I got an RMA'd disk from Western Digital, copied the data to the new disk and removed the old one. After reboot, the test gives much better results (95 MB/sec average, 50x better than before!) The computer runs much quicker in general. Lesson: a particularly slow computer, especially for applications which access data on a particular drive can simply be the result of a bad hard drive. (e.g. iTunes accessing music on D or Picasa accessing photos on D in my case.)

That is very strange indeed. I have a WD1001FALS that has an average transfer rate of 91.5 MB/s. Your average of 1.8 is crazy slow. Its normal to see a strait line like yours for solid state drives, sd cards, or flash cards. Usually it is a bit higher than 1.8 MB/s though. Non SSD drives usually have a curved graph because they are able to read data on the outer rim of the platter quicker than data stored near the center of the platter (as far as I know).

A few shot in the dark ideas:

I've seen hard drives do strange things when the motherboard only supports SATA I with a SATA II drive in it. You could try putting the jumper in the hard drive to forice it down to SATA I or 1.5Gb/s.

You could try uninstalling the driver in device manager and letting windows re-install it.

You could try a different SATA and power cable.

My guess is that there are too many files in the folder for it to display/parse well.

Does performance improve if you segment the folder to have fewer files at the root level of the directory?

An ATA drive will have a peak performance (IIRC) of 133mbps (megabit per second), or ~15MBps (megabytes per second).

SATA drives will perform substantially better - on the order of 10-40x performance (peak), so you *should be seeing up to ~650 MBps peak performance (on SATA III).

Not the answer you're looking for? Browse other questions tagged hard-drive performance speed sata or ask your own question.