How can I edit Unicode text in Notepad++?

If the file is actually encoded in Unicode, Notepad++ should detect it automatically. The Consolas font works well for me. You can try one of these two menu options:

I'm pretty sure the first one will do what you want.

The problem described in the question happens when an empty/new document is set to "ANSI", and Unicode characters are pasted into it.

There isn't any auto-detection when used with an empty/new document, at least not in the version of Notepad++ I tested it on (v5.4.5). "ANSI" is the default in Notepad++ for a new document, unless set in menu Settings → Preferences → tab New Document/Open Save Directory.

The solution is to set the encoding to UTF-8 before pasting, menu Format → Encode in UTF-8:

If the encoding is not changed from "ANSI" this is the result:

If the encoding is changed this is the result:

As can be seen in the figure below (the Cyrillic part is highlighted), Notepad++ actually converts the Unicode characters into ASCII 63 (hexadecimal 3F), question marks. That is why the Unicode characters are lost (in "ANSI" mode) when copying the text out through the clipboard (it is not a font issue - information is lost). 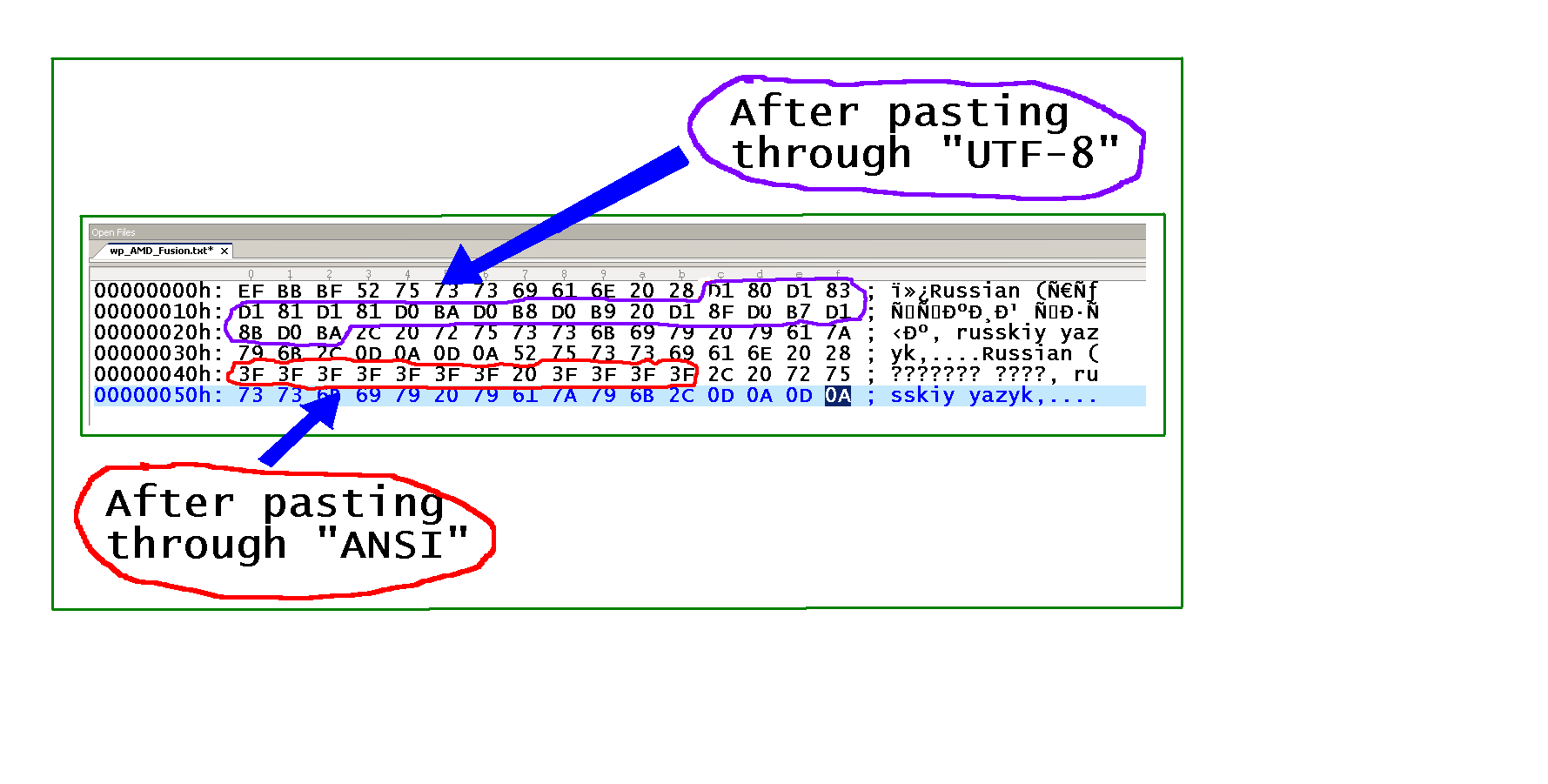 There are good news and bad news.

Good news: Notepad++ supports Unicode (at least from what I can gather).

Bad news: Apparently Unicode support is only on Windows XP.

I actually do not have a Windows machine in front of me. From what I remember, there is an Encoding menu under the Format menu somewhere. The encoding for Unicode is actually most commonly UTF-8.

Here is a 'pretty' picture of Unicode support in Notepad++,

Unicode works perfectly on Windows 7. The only issue that comes up is that you have to retype the characters that have been changed. It's happened to me. I'm writing with Scandinavian letters so ä -> E4, ö -> F6. It's a pain in the butt to replace them all, but it's worth it.

If you encode a page from ANSI -> UTF-8 then there will be some character problems.

I would suggest that you first create a new page in UTF-8 and then copy/paste your information over. There won't/shouldn't be any trouble then.

This is worked for me:

I changed the font to Courier New in style configurator on my PC (Windows 7 with English/US character set and Romanian for non-Unicode set). It´s working with Courier New & Tahoma fonts + UTF-8 encoding.

This, in addition to:

The original question asks to edit Unicode text. If this means the Unicode characters should be rendered as well as being editable then not only does one need to choose the proper encoding, such as UTF-8, but one must have a font that renders the UTF-8 encoded characters.

Various fonts have been mentioned. The font that appears to render the greatest range of Unicode characters is Times New Roman. For example, try to render the service mark character ℠ in the other mentioned fonts.

159
How can the font size be changed in Notepad++?