Why does my computer run fast after a clean install?

I recently formatted and reinstalled Windows on my laptop. It now runs much faster. I have been doing this about once a year for the past decade. Why is this needed?

I always figured this had to do with installing and removing programs, which over time fill up the registry with junk. Is this true? Are there any programs that can tweak the system without reformatting?

The registry is a bit of a misconception, The way it works, it could be filled with junk but it shouldn't slow down your machine - imagine, all roads are linked, but just because there is a traffic jam somewhere doesn't always mean it will affect you somewhere completely different!

It is pretty much just software that starts with your computer, updaters and bad drivers.

You can greatly speed up your computer using Microsoft / Sysinternals AutoRuns and delete/disable enries you do not want to start up with your machine.

The biggest slow downs are:

No, even if the registry was massively bloated there would be little impact on the performance of anything other than exhaustive searches (ed. of the registry itself).

Up to this point nobody has proven him wrong with extensive unbiased tests, that involve multiple reboots, multiple computers, different sets of software and can easily be reproduced. It's one of those myths that get debunked amongst many other so-called performance improvement tips, simple because nobody has even reproducible claimed that the cleaning on its own improves performance. Because really, removing entries that aren't even touched while your PC boots is not going to have much effect.

Over time, these applications themselves load more information which is what makes software like Disk Cleanup come to existence. CCleaner these days does quite well on enumerating most of the files of most of the software you have, however you will want to stay away from its registry cleaning capabilites with have a higher chance of breaking something than giving you any performance benefits.

The most well known locations where this happens are the Temporary folders of Windows as well as caches and history files and folders of your browser, these are files and folders that are actively used and thus play a big role in your performance. Other files may include those referenced to by the registry or by configuration files on your computer. Keeping the amount of software and files / folders on your system to those that you actually might help as well.

Here's what Chris Pirillo from Lockergnome (famous for his TECH on CNN) has to say: 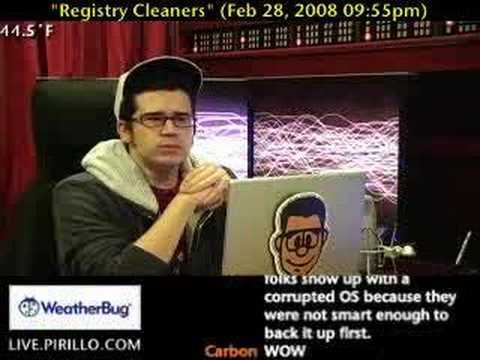 I tune up customer PCs regularly. While each PC is different, the changes that have the most impact generally are:

I've tried a variety of register cleaners/compactors/etc. over the years, and they've never made a difference I could detect.

The first data written on a hard disk can be retrieved faster:

For a clean install you will probably use only the fastest part of the hard-disk. With an old computer your harddisk is probably full and/or system files (updates, etc) are written to the slower part of the hard disk.

Since Windows 2000 realized I was trying to understand when and why Windows OSes start to work slowly. And I found the reason and the cure.

The reason is audio/video codecs. Do not install any audio/video codec! Even DivX is not necessary. Codec packs are evil. :) In Windows any installed codec is a windows driver. Any driver slows the boot time and the general performance.

The cure is VLC player. This one don't require any codecs, they are embedded.

Since then all my systems (Windows OSes) almost don't lag, boot fast, and never hangs.

One case of real-life measurements about how registry cleaning can improve performance is found in the article : Putting Registry-/system-cleanup apps to the test. Please note that to arrive at a situation where registry slow-down occurred, the tester installed CNET’s list of the 20 most popular Windows downloads. This is his summary of the measurements of boot and shut-down : 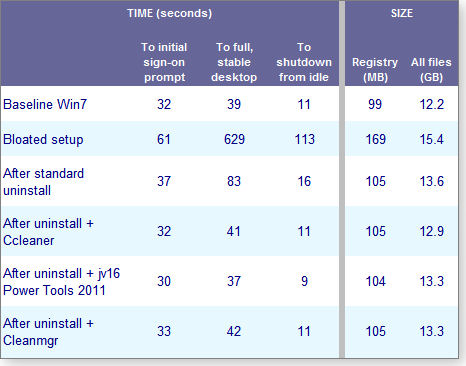 Here is the explanation of why does this arrive.

The registry is a simple-minded database, and has the distinction of being one of the slowest database systems in the world. In an attempt to somewhat protect it, Microsoft has partitioned it into 5 separate hives.

Over time the registry becomes larger and larger as new programs are installed, used and removed. Even though data is deleted from it when applications are uninstalled, the size of the Registry will not decrease. This is because the data will be marked as blank but remains in place and also because of "left overs" - data that the uninstaller forgot to remove. In this way the registry becomes slower over time, taking longer to access.

There are many products to clean up the registry, but that doesn't help much if one doesn't then also re-compact it, in this way erasing the blank spots occupied by deleted data. As the vast majority of registry-cleaners do not do compaction, they are in effect useless.

A computer whose owner likes to try out software products, installing and uninstalling, may benefit from registry cleaning and compaction, but only after quite many such operations. Please note that any improvement will only show up for registry access, which is normally only a small part of what any normal program does. Some products for whom registry access is a major activity are for example the Windows boot and Installer.

Computers whose setup is relatively static, have nothing to worry about, so have no need for registry cleaners.

Cleaning and compacting the registry is not a 100% process. So once a slow-down is experienced, registry tools may improve the situation, but can never compare for speed with a clean installation of Windows.

Share
Improve this answer
edited May 27, 2012 at 16:10
community wiki
18 revs, 2 users 94%
harrymc
4
Add a comment  |
Highly active question. Earn 10 reputation (not counting the association bonus) in order to answer this question. The reputation requirement helps protect this question from spam and non-answer activity.

Not the answer you're looking for? Browse other questions tagged windows performance or ask your own question.

0
Why is Windows Vista slow?
185
Is the performance of a CPU affected as it ages?
3
Registry Cleaner, useful or not

2
What could cause a computer to slow down over time?
2
Why must you have administrative privileges to install java 2 sdk
36
Why is my computer really slow despite having a considerable amount of free memory?
1
Copying `/Users` on Windows 8 over to another Windows 8 installation to retain settings?
7
Low disk performance with Windows 8.1
1
Windows 10 Computer, Performance drops dramatically after battery dies