What is the best way to create tactile bumps on your keyboard?

I have a laptop keyboard that has some of the functional keys on the right side kind of mixed in with the rest of the keys, so I have to look down to set my hand. For instance, I want to be able to just slide my right hand to the right and feel for the bump that signifies the down arrow so I can navigate around.

What is the best way to put a nub or something on there, kind of the way the F and J keys have it?

There are 2 cheap sticker solutions that I know of.

I've attached a tiny piece of sand with super glue. Experiment first off your keyboard to find the right size of sand. I found that REALLY small is big enough. Sand (being made of stone) will wear longer than the rest of your keyboard. Sand is "everywhere" on the ground or when you sweep your floors, but if you want you can get some from various masonry suppliers or hardware stores... just offer to sweep a little bit of their floor. :-)

Small piece of regular office tape, or vinyl tape (they have different thickness) - works for me. 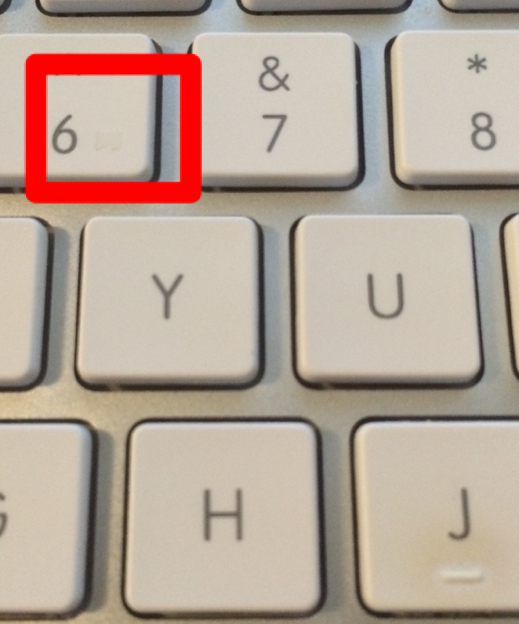 Clear nail polish works well, and is dirt cheap (especially if you have a lady-friend to supply it). The downside is it'll wear off fairly often and you need to reapply every month or two, but that's also a feature because it means the mod is reversible.

I have taken a keyboard membrane (clear keyboard protector), and cut the the keys out of the membrane that I need a response from, then put the little membrane cut outs over the keys (like little key condoms). I could feel the difference right away, it was removable, I could see through it, it didn't damage my keyboard in any way, and it worked. I highly recommend this.

In the dark ages before scanners, when cashiers had to actually enter prices into cash registers when they rang up groceries <gasp>, sometimes they'd glue small o-rings on the 5 key so they had tactile feedback of their hand position and could operate the register faster.

Seriously, I kid you not. (about the hand entry)

Use Araldite Rapid (15 minute drying time). Clean the surface of the key with a strong degreaser (use gloves) then scrape the area lightly with a craft knife or anything sharp and pointy. Touch a small amount of mixed epoxy resin to the area immediately after you have mixed it, this will help adhesion. Put a tiny blob on a pin, wait until it loses it's ability to run then pop it onto the centre of the key, use a wet or oily fingertip to flatten out any pointy bit. The best epoxy for this is actually "metal loaded" but it takes practice to get the consistency right. If you get it wrong you can wipe it clean as long as you do it straight away. It's very much a matter of "practice makes perfect" so do a few blobs somewhere safe first to get the hang of it.

Take care not to erase the letter with the degreasing agent

And, yes, I do have to do some odd things in my place of work.

You may be able to find cute raised stickers for kids in a newsagent or stationary shop. 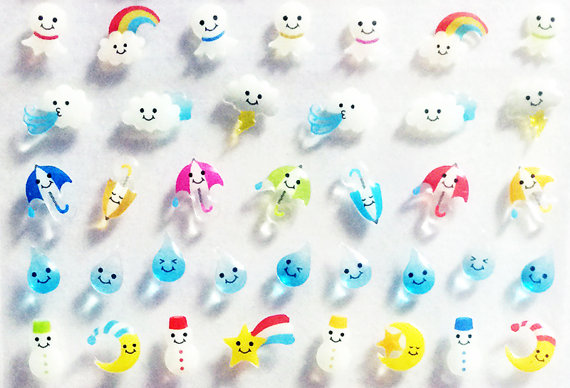 When the stickers are different shapes, your fingers may be able to tell the difference...

Do any of them feel like a Tilde or an Up Arrow?

Here is how they do it in Korea: 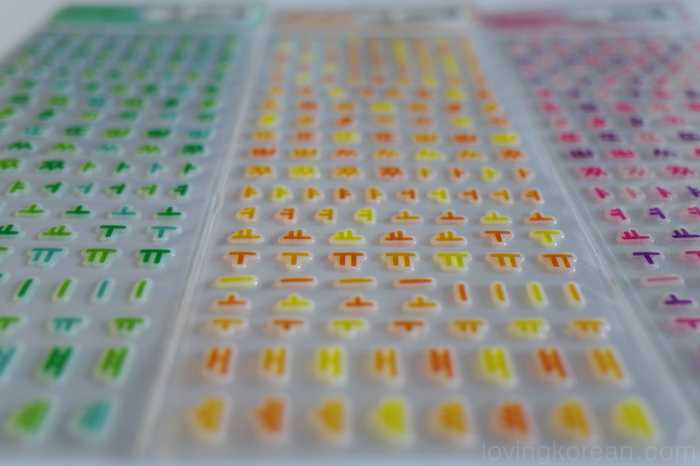 That author says that the standard stickers mentioned earlier are susceptible to slipping.

You can even get felt stickers.

If you only have thin stickers (or tape like A B's answer), then in order to feel them, stick them badly and leave a bump!

I've found that sticking small squares of black cloth tape or gaffers tape works, because they have some texture while the regular keys are smooth.

Use those plastic bling stickers for cell phones. A little super glue and they should stay nicely.

Not sure if this will work, but it may be worth a try (on an old keyboard first). Take a soldering iron with a very fine tip and get a small bead of tin solder on it. Barely touch the key with the tip and it should leave a very small bump of tin that is imbedded in the key but also raised. You could then cover this with clear nail polish or epoxy if you're worried about touching tin, plus the oil from your skin could cause it to oxidize.

Here's another good one; the soft side of one of those really sticky velcro squares. I found one on my desk from my internet install kit. Gives it a nice tactical feel. You can cut the big square into smaller ones and you have a few replacements.

I just did it to mine. I needed something to stick out more than scratches or some of the other good ideas on here. Just in case I'm doing something like looking at the map then have to jump over to the movement keys when I get attacked from behind maybe.

A "W" key is a "W" key. If you can't see it behind the velcro you're a gamer so you know where the key is anyways.

I have a black key-white letter keyboard, the ivory Logitech K360 to be exact. I also put clear packing tape down in squares, color coded my "R" red (for record. music production.) "G" green(ish) (for Google Drive) and "P" yellow-ish (for photography folder. landscape art for showing quick passer-bys my shots.) and put a second tape over the colored sharpie ink so it's see through.

As you can see I love using my hotkeys. I use them for everything. So I thought I'd put this one in about the velcro stickies for future readers.

There is now (and was before) a WASD "keypad" by Nostromo they used to sell in Best Buy, Gamestop, Electronics Botique back when games like C.O.D. first came out and all that OG stuff that started the online WASD thing. There's another one out now by Logitech called the "G13". They both have thumb joysticks/d-pad for movement or whatnot. You can find them both online. They have a more simple interface, custom keys and the G13 has pre-indented "WASD" numbered keys so you can find them faster.

I use fennel seeds. There can't be a better use of nature than saving your keyboard which is in great condition except for those worn out tactile bumps. Nature comes to your rescue whenever and wherever you want: 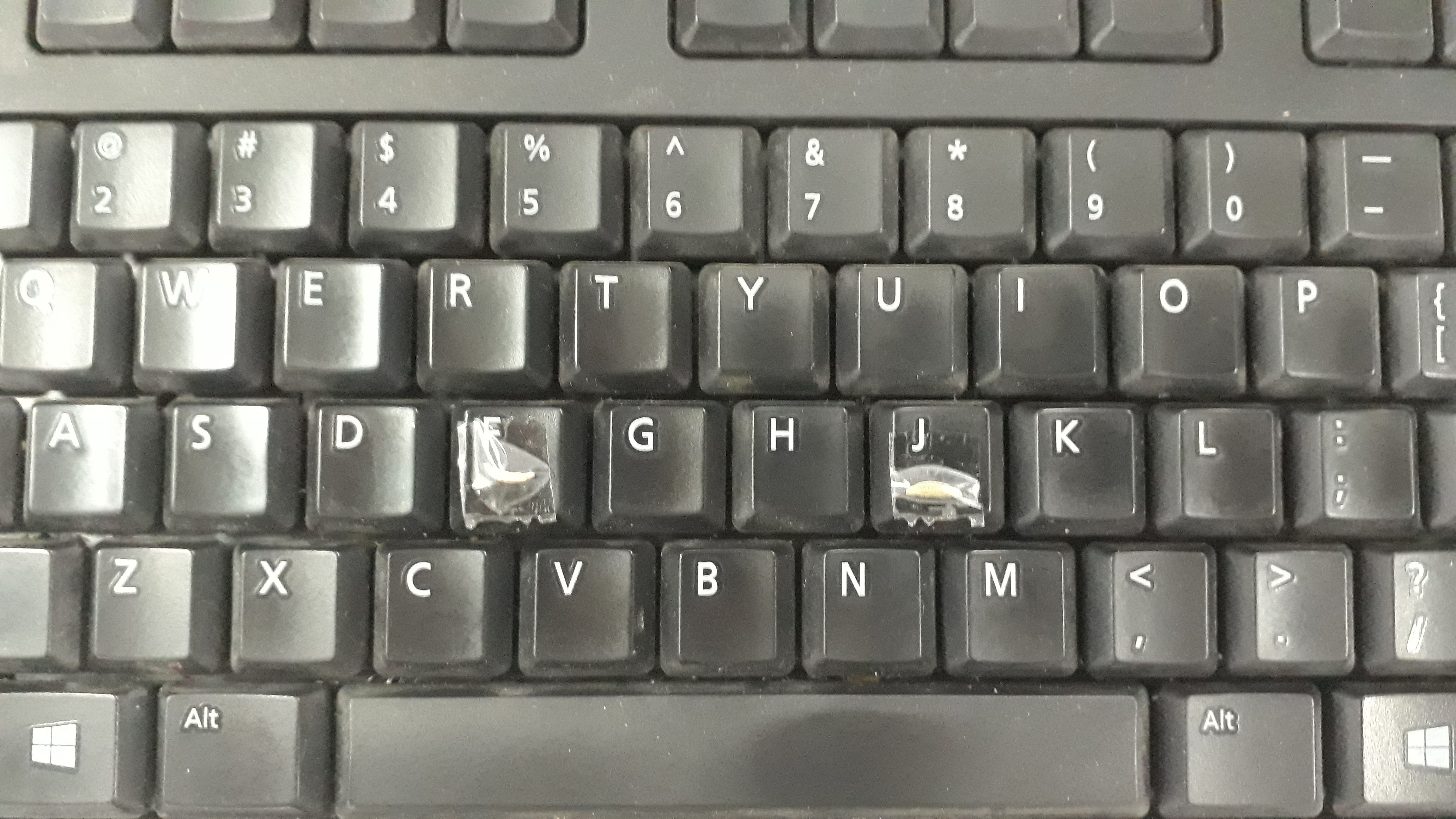 I've used cello-tape for sticking but you can opt for more cleaner options to stick the seeds. May be some other glue.

You could always make a little scratch on the down key to tell the down key apart from others. Not quite a nub--but it should work. And it's pretty permanent.

Not the answer you're looking for? Browse other questions tagged keyboard or ask your own question.

15
What do you call the Ins/Del/Home/End/PageUp/PageDown key group on a keyboard?
0
Making a tab key on the right side of a full sized mac keyboard
0
Edge keys stop working on eeepc
1
The arrow keys, even when disabled in vimrc, type ABCD then go into insert mode. Why?
1
Windows laptop keyboard stuck in weird mode, where keys don't type what they're supposed to
2
Change keyboard layout with hotkey?
3
Jump between open windows on multiple monitors in Task View on Windows 10 with keyboard