What size should I make a partition to appear as a standard number e.g 100Gb

I'm reformating and installing windows vista on friends computer. I'm making one partition for OS, one for data. As a bit of OCD i want to make one of the partitions so it appears in windows explorer as a nice round number e.g 100Gb.

What size would in MB would i need to make the partition so it shows up as 100Gb? bonus: why?

There's a difference between the partition size that is specified in MB in the installer, and the disk capacity that is shown in Windows Explorer. That difference is the size of one block or "allocation unit", which is 4KB for any NTFS volume over 2GB; and that block is the first block on the partition, to hold the boot sector of the disk (512 bytes). The rest of the block is unused, so that all blocks are "aligned" on the disk.

So you can create a partition that is one MB larger than the desired size, and after 4 KB is subtracted for the boot block, the disk capacity should be shown as you want. But it is still not exactly that size.

While the installer and DISKPART work in MB, the partition table is expressed in sectors, so you can manually edit it to create a partition that is exactly the size you want plus 8 sectors (4 KB).

make it purely as a power of 2

Its like that because acc. to HDD manufacturers, 1kB=1000 Bytes, while the computer identifies 1kB=1024 Bytes

I'm OCD and this has plagued me for years. The 1024 thing doesn't work, apparently because there's some administrative overhead (partition table or superblock or some such) that the OS subtracts from the physical space before it displays the free space, even with a spanking-new (=empty) partition.

Today I installed Linux and tried 1032 (1024 plus a smidge) and the swap partition I wanted to come out as exactly 8gb game out as 7.69. I booted the same box using a Live Windows thumb drive and it agreed that that partition was 7.69gb. So I interpolated and came up with 1073.6, which struck me as too high but I figured I'd try it and see.

So I partitioned my swap slice as 8,589mb during the install and the OS reports it at 8.0gb on the nose. And the other partitions I wanted to come out on the even GB also came out point-zero exact. 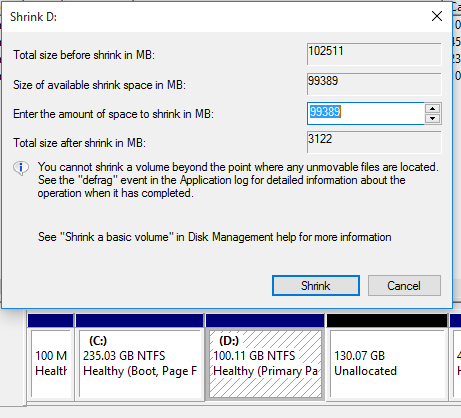 Not the answer you're looking for? Browse other questions tagged windows windows-vista partitioning or ask your own question.

1
Will installing Windows 7 on top of Ubuntu / Vista machine wipe out the Ubuntu boot menu?
0
Windows reports discrepancy in partition sizes after resizing with gparted
5
How do I repartition a hard drive in Windows 7?
1
Shrink a partition in Windows 7
3
Disk Partitions and Performance
1
How to fix the boot sequence and/or restore a deleted partiotion
0
Can I delete this partition?
5
Is there a difference between Windows-created NTFS and Gparted-created NTFS?
0
df data does not match fdisk data in LUKS encrypted partition
0
How to format a flash drive in Linux for use with other operating systems