I spend quite a lot of time working on various machines via RDP (usually RDPing to one machine and from there RDPing to other computers outside our LAN) and have an issue where the modifier keys (i.e., Ctrl, Alt, Shift, and

For example, if I am trying to type "", I could end up getting 2" because the remote machine gets the first press of the 2 key before it gets the Shift modifier. This causes particular problems with password protected fields (as they often require mixed case letters and you can not see what is typed) and with Ctrl+C (where the highlighted section is deleted and replaced with a C).

(And before anyone asks, this is not just bad typing, otherwise the problem would not be restricted to RDP sessions.)

There are times when the problem is more pronounced, and it may be related to a slow Internet/VPN connection.

Has anyone seen this problem, and (other than always typing very very slowly, i.e., about one character per second) are there any solutions to this issue?

It is the way the RDP client responds to control keys.

To resolve, try going into the options for the Remote Desktop Connection>Local Resources>Keyboard and change to "On This Computer". 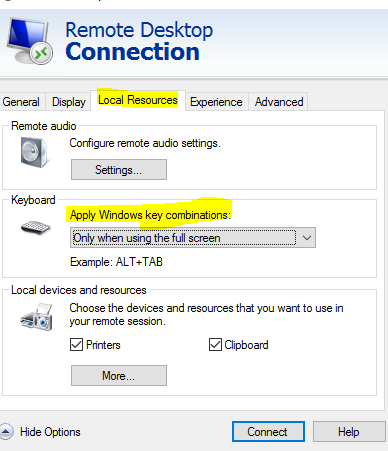 Be aware that alt+Tab and similar commands will now run on the local system.

I've found the solution to this where one is using nested instances of Microsoft's Remote Desktop client. Imagine the following situation. You're sitting in front of an OS X machine, and you remote desktop into a Windows 7 laptop. From the Windows laptop you want to remote desktop into another Windows machine (in my case a work box over VPN). The solution to your keyboard mapping woes is: on the Windows laptop, i.e. the destination of the first jump, change the remote desktop hardware settings for the 2nd jump to use the local keyboard, not the connecting one.

To change the setting:

Although this setting does not seem to apply to simple Shift-key combinations, it did solve the problem for me, when working with nested remote desktops.

Of course, it comes at a price: you cannot Alt-Tab through the windows on the remote host, etc.

It's not "free" but some gamepads let you map buttons to key combinations...think out there mouse or numpad with wrist pivots(i think asus makes one). this MIGHT solve you problem....not 100%, but if it sends a combination it could. the slowing down of modifier keys could also be a cheap attempt at not passing on control sequences(if this turns out to be the case i would look in to VNC server/client as it's a busted solution)

There's been a bug ever since Windows 10 version 1607 (Redstone 1, i.e. build 14393) that causes some keys (like Control) to fail to take effect with short keys, causing a very similar issue to what you're mentioning.

Namely, if you try to press Ctrl+V to paste your clipboard, you might end up with a v on the screen if you don't wait a couple hundred milliseconds between keystrokes.

The only solution I know to this problem is to use a Remote Desktop client from an older version of Windows, such as from Windows 10 version 1511 (Threshold 2, i.e. build 10586), which you can do if you make a folder and copy the following files from your old \Windows\System32, with the given SHA-256 checksums, then run mstsc.exe from it:

Seems, the update Windows6.1-KB2847932-x64.msu fixes the issue. I have similar problem on my Win7 like @einpoklum: Shift and Control keys out of sync with normal keys over RDP

To duplicate problem, reverse the order of the key releases. A Microsoft RDP bug.

Not the answer you're looking for? Browse other questions tagged windows-7 windows keyboard remote-desktop remote-access or ask your own question.

7
RDP problem with Vista and Windows 7 destination
2
How to send keystrokes over internal network?
0
Windows occasionally thinks a modifier key is being pressed when switching in and out of remote desktop
12
Erratic mouse movement in 3D games over RDP with RemoteFX
0
Problems with RDP over OpenVPN Only to Win 7+ computers
8
Windows: Why does the Alt Gr key does not work when an RDP session is running?
0
My keyboard shift & ctrl keys are flickering on and off Win 10, Recent after auto update
1
Disabling Shift key from overriding Numlock (or stopping Shift key from overriding Numlock for Numpad keys and using Shift as a Numpad 0-9 modifier)
1
remote connection (AweSun and AnyDesk) - Control and Shift key stick when pressed for 1 or more seconds