MS Office 2010 refuses to let go of the Swedish Language

I am trying to change the default interface language (menus, buttons, shortcuts etc) of MS Office 2010. I find it very annoying that they have made up ad.hoc. Swedish names for loads of things making searching for something you have a problem with a nightmare.

Also, the Swedish version have non-industry-standard-shortcut-keys, for instance:

Ghaa! This drives me crazy. Anyway, moving on to my problem.

This problem could be fixed in two ways, right?

Ok, fine. This is a screenshot of the "Language Settings": 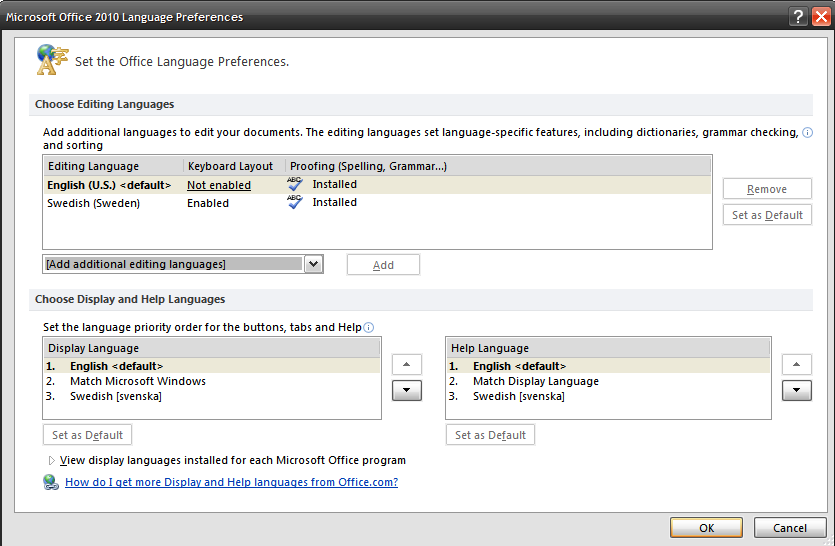 It's still in Swedish! And my custom shortcuts are gone (see the mouse hover over the bold button) Ghaa.

EDIT: Actually - the only language installed might actually be Swedish. Pressing the text on the bottom of the first screenshot, I'm transfered to a "Microsoft Language Pack" page, the English language pack is... $30. Well. No. I wont pay that to get the default language. Stupid.

Have you tried to delete the swedish language, thus leaving the english only, this should force MS to use english, also Bloodphilia makes an excellent point, you need to enable both parts, but either way I'd erase the other languages you don't need, for memory.

Yeah the funny thing is that the language options screen comes up in English, not Swedish. Normally you don't get the option to run the UI (and consequently, shortcuts) in English when you have a foreign language version. Not sure what the drill is in Sweden since English is virtually a native language there... interesting what Johny said. Anyway, see How to change office shortcuts?

21
How to change office shortcuts?

1
Inverted question mark only on Microsoft Office applications
12
Keyboard shortcuts in non-English version of Microsoft Office
10
How to add a shortcut in OneNote 2013
6
Office 2016 changed the UI language. How do I revert it back to English?
3
office 2010 won't switch interface language
1
Why is my pasted text being marked as a different language?
2
Stop online Office apps from replacing lowercase single-letter word "i" with "I"
1
Microsoft Word 2013 ignores language setting for footnotes
0
Formatting lost when pasting from some non-MS apps to MS Office 365 apps