How to disable auto-maximize/resize window (aero-snap) when near screen edge?

Whenever I drag or resize a window near any edge or corner of either monitor, Windows wants to maximize or resize the window for me in several different ways:

Actually, now that I think about it the 3rd one isn't so bad, its just the full and half-screen maximize features that drives me mad.

Is there a registry hack to disable these settings, preferably independently?

This Windows 7 feature is called Aero Snap. Here's the easy way to disable it completely:

And here's the roundabout way via the registry:

Hope this helps! I haven't found any way to retain functionality for a single edge - it's either all on or all off.

I'll add an answer here because a similar behavior can also happen due to a certain third party application called Dell Display Manager. This software can cause a similar behavior to Aero Snap, or at least when searching for solutions, this post comes quite high in Google, so because I struggled to fix this, I'm going to post the solution for future victims of this program :D.

The problem is solved by opening the application and disabling "easy arrange" by selecting a no-layout icon (as in the second picture below).

This is how the behavior caused by Dell Display Manager looks like (when you drag a restored window around the screen). 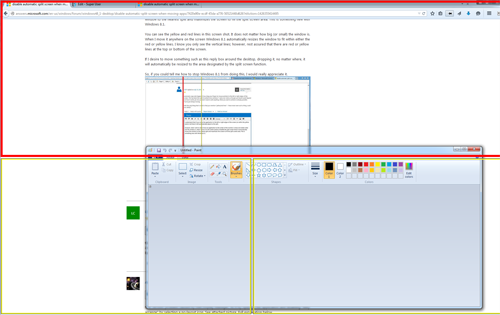 and this is how you fix it: 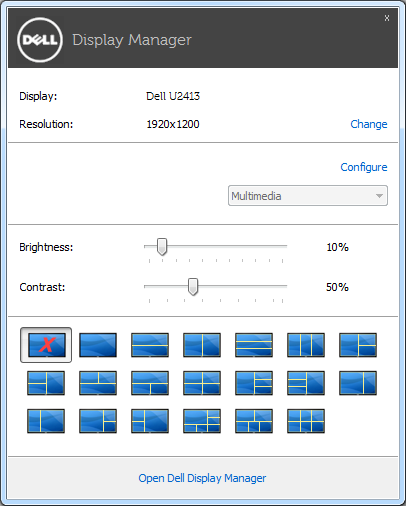 I got this application together with my Dell monitor. Like most software made in China it is quite buggy (actually it's among the best such programs I've used, much less buggy & horrible than others). Usually, hardware manufacturers have terrible software but this one is quite useful due to auto-setting of brightness level based on running application.

The problem can be fixed if you open Dell Display Manager. You will see that it has some example window layouts in the lower part of the window. You can also access these if you go to "Configure" (that is available when it's in "Auto mode"). There, you have a tab called "Easy Arrange" and that's where the problem is. In "easy arrange", the Dell Display Manager tracks window movements and attempts to reorganize them based on various available layouts. Depending on the layout you selected, it will draw yellow boxes on the screen. I had one where my screen was split in two: one thin vertical yellow box on the right and a larger one on the left. When the window was in one of the boxes, the border became red.

I posted this on the Microsoft Forum where somebody actually had the exact issue I was having:

I had the same problem in Windows 10. I had set all the settings in Settings/System/Multi-Tasking to disable everything to do with "snap" and the problem still happened. By coincidence, I noticed that when I was editing documents, the selection of text with the mouse was erratic. I decided to use a different mouse and to my surprise, this cured both the text selection and the window auto-maximize problems. Somehow, the mouse must have been sending a double-click when I did a single click. So, if you have the same problem and nothing else cures it, try using a different mouse.

If you are using Dell Easy Arrange you can also hold down shift while dragging to temporarily disable snapping.

CrispyBitsCrispyBits
11
Add a comment  |
Highly active question. Earn 10 reputation (not counting the association bonus) in order to answer this question. The reputation requirement helps protect this question from spam and non-answer activity.