There is a computer that is not mine that is accessible on my network. I can even access its filesystem via AFP. What I want to know is how the computer could get on my network. My network is secured like this: 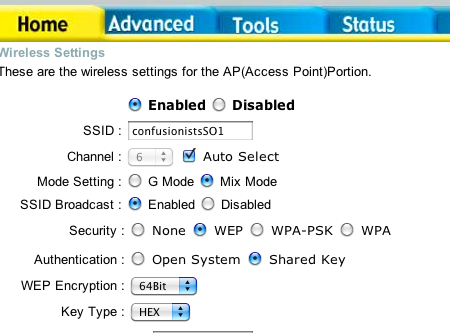 Does that mean that they've used password cracking tools? The pass is not easy to guess but not hard to figure out via brute-force hacking, I guess.

If I am being hacked, should I switch to WPA?

WEP is laughably insecure; there's even a wikiHow article explaining how to crack WEP.

Consumer level WPA and WPA2 (both are forms of WPA-PSK), though, are also crackable. One can crack a weak WPA password by forcibly de-authenticating a connected computer then observing the traffic that the computer generates to reauthenticate. This gives the attacker enough data to perform a dictionary attack to get your wireless password.

If you use WPA with a strong password (long, uppercase and lowercase, numbers, symbols), you should be reasonably safe from people intruding in on your network.

WEP has known weaknesses and should no longer be used. Switch to WPA (using a new password) as soon as possible.

The screenshot looks like an older version of the D-Link config interface I use – you're missing WPA2, and the radio selection is a drop-down in my interface. What you should do is:

The end result is a network that does not advertise itself and requires both getting the security type and password correct and also that the connecting interface use an explicitly whitelisted MAC address.

To set up MAC filtering:

The drop-down only lists the MAC addresses of interfaces that have connected in the past. When you later want to connect a new computer, or connect an old one via a new interface, you'll have to find a way to get the MAC address for the interface you want to use from the machine yourself; the router won't be able to help you out. Once you have it, you just type it in along with a name and add it to the list.

I get the MAC address using ifconfig en0 or ifconfig en1 (as appropriate) on my Mac; you can likely use ipconfig under Windows, but the MAC address is undoubtedly exposed in some graphical UI somewhere on every consumer system you'll want to connect to the router.

MAC spoofing is still a possibility, but if someone is that determined to get on your network, you'll either need to create a much more clever setup or just switch to using a cabled network.

Not the answer you're looking for? Browse other questions tagged wireless-networking security or ask your own question.

5
Will Windows show a warning if someone tries to guess my password for a lot of times?
1
Problems setting up security on a wireless network
2
Could be public key cryptography used in Wifi authentication?
1
"Bad Password" Message in WICD-Curses
5
Log file for ssh attempts?
0
Identifying MAC address of connected device
0
About the passphrase related vulnerability of symmetric encryption
0
Can the Clear Text of a UEFI Password be Obtained by an Attacker?
0
Unauthorized access to a server over ssh when client-server connection is ssh-key based