How to unlock and remove a protected partition from Prestigio USB stick?

I have one of those fancy schmancy devices, which is given to me by a frustrated friend of mine.

Device is a Prestigio Leather 8GB 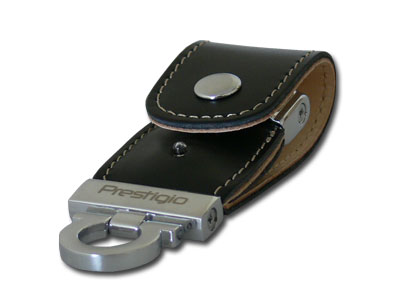 It identifies itself to Linux host as:

Kernel messages as USB device is plugged in:

So, symptoms are typical for U3-like devices: two separate devices inside of a single flash device. Windows sees it also as two identical usb devices, and mounts two separate drives to system, whereas first one presents itself as a CDROM device, holding a write-protected content, and second is a regular flash-disk partition, that "can" be written to. However, it seems like it's broken in some weird way, since it won't let me write anything to it, format it, nothing, but that's not the issue right now.

Question: How can I unlock entire USB stick so it appears to system as a single, 8GB device which can be partitioned and used normally, without restrictions?

Since it appeared to be an U3 device, I have tried standard utilities: both U3 Uninstaller by u3.com (found on SoftPedia), and opensource u3_tool from sourceforge (on both Windows and Linux). First utility failed to even detect USB stick as U3 device (simply stood idle while I re-plugged stick several times), while second tool failed with some obscure error about SCSI command unable to do something (I might be able to provide exact errors when I switch back to windows). u3_tool -i /dev/sg3 (Display device info) fails with

...and every other option fails with same error, minus first part which states which command precisely has failed.

So, apparently, this isn't a U3 device. Or, if it is, it doesn't behave like one.

I read on a few occasions that this device protection is done by special command sent to device which tells it to lock itself, and so there should be an unlock command, that would set drive straight.

Does anyone have any idea about what could I do to this device to fix it?

P.S. I also mentioned a problem with being unable to use second "drive", but I'll tackle that problem when (and if) I manage to merge those two devices into one...

I've just managed to merge the drives of an 8 GB Prestigio stick using this procedure (in Russian): www.flashboot.ru/Files-file-561.html

Not the answer you're looking for? Browse other questions tagged usb-storage protected u3 or ask your own question.