Title says it all, just installed the Nvidia card, I know this is a driver related issue I just don't know how to fix it I cannot find a driver version that will work not even the one that windows selects for the card, or the one on the disk supplied with the card. Any help will be appreciated. 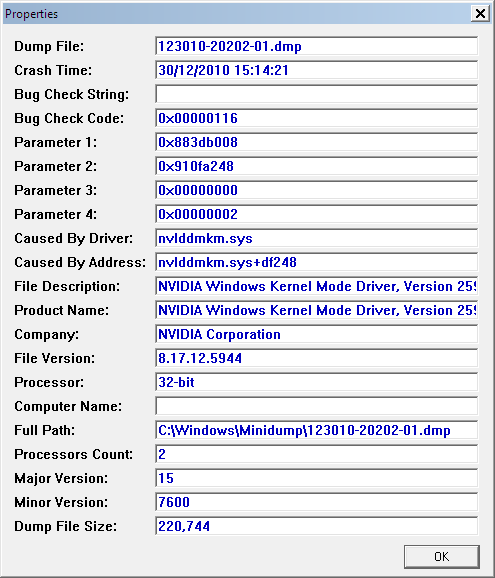 What happens when I try to install

Any driver that does install causes a BSOD the driver disk says it supports windows 7 and the drivers on the disk cause a BSOD too i'm at a loss of what to do.

I tried a fresh install on Windows 7 64bit using the 263.14 drivers and that BSOD so I must wonder if installing vista would help at all.

I really wish someone could help me I can't afford to buy another graphics card.

It's been 3 months surely you guys have an answer

I came across a few solutions none that worked.

Did everything stated in the bullet points, then ran driver sweeper then re-installed drivers, still a BSOD I'm just going to pressume that the graphics card is DOA.

Should there be an extra power connection too support the x16 PCIe slot, im sure x16 slots require extra power and i've got the connection on my PSU just no-where too plug it in

We have a ton of these in PC's at my job to provide dual display output. They are from numerous manufacturers: Zotac, EVGA, ASUS, and XFX, We have had good luck with the 196.21 drivers from NVidia, they are a little old but very stable. I'll do a quick search for them online and edit with a link. BTW did you remember to uninstall the integrated drives before installing the NVidia ones? I have run into random BSOD's if the Intel integrated drivers were left in place. Also please let me know what version of the drivers you are using and what version of the card you have (PCI or PCIE and ASUS, EVGA ETC..) I should be able to get this card working for you.

There may be a conflict with some of the other hardware installed on the PC. Start out by disabling anything in the bios that is not absolutely necessary and try installing the latest drivers. If it still BSOD's try installing the drivers in safe mode after running driver sweeper, let me know how it goes.

I have an NVIDIA 8800 GTX (running on a 64-bit Windows 7 system) that I bought a few years ago and it worked fine till 2 days ago.

I noticed a small audio glitch and then some minor video problems (screen flickered only once or twice) - hardly noticeable glitches and may go unnoticed except I'm a retired engineer and notice little things and keep it in mind.

A couple of days later I noticed my computer was in the 'Blue Screen Mode' or BSOD (this computer runs 24/7). After restarting I had 'artifacts' (vertical 'squiggly' segmented lines etc).

The 'minor' audio and video glitches I described above came soon after a Windows 7 update but I didn't take it too seriously until my monitor showed 'artifacts' and the Blue Screen showed up.

I saved an NVIDIA driver from 2010 and installed it over the newer, existing driver. WOW! Amazingly everything was back to normal - this is after spending all day researching the error code nvlddmkm.sys and researching replacement cards.

The driver I used is called:

Not the answer you're looking for? Browse other questions tagged graphics-card bsod xorg nvidia-graphics-card or ask your own question.