What are the Windows A: and B: drives used for?

In Windows you have a C-drive. Everything labeled beyond that is with the following letter.

So your second drive is D, your DVD is E and if you put in a USB stick it becomes F and the following drive G. And so on and so forth.

But then, what and where are A and B-drives?

Short Version: A: & B: are reserved by floppy disk drives, so C: is used by hard drives for backwards compatibility reasons.

Once upon a time, the early CP/M and IBM PC style computers had no hard drive. You had one floppy drive, and that was it. Unless you spent another $1k or so on a second floppy drive, then your system was smokin'! If you only had one drive it was common to boot from one disk, put in the other disk with your programs and data, then run the program. Once the program finished, the computer would request that you reinsert the boot disk so you could use the command line again. Copying data from one disk to the other was a series of

By the time hard drives became cheap, the "expensive" computers typically had two floppy drives (one to boot and run common programs, one to save data and run specific programs). And so it was common for the motherboard hardware to support two floppy drives at fixed system addresses. Since it was built into the hardware, it was thought that building the same requirement into the OS was acceptable, and any hard drives added to the machine would start with disk C: and so forth.

During the transition from 5.25" disks (which were actually, physically floppy) to 3.5" disks (which were encased in a harder plastic shell) it was common to have both drives in one system, and again it was supported on the motherboard with hardware, and in the OS at fixed addresses. As very few systems ran out of drive letters, it was not thought to be important to consider making those drives re-assignable in the OS until much later when drives were abstracted along with addresses due to the plug'n'play standard.

A lot of software was developed since that time, and unfortunately much of it expected to see long-term storage on the C: drive. This includes the BIOS software that boots the computer. You can still attach two floppy drives, boot into DOS 6.1, and use it as you would have in the early 90's, with floppy drives A: and B:.

So largely the reason for starting the hard drive at C is for backwards compatibility. While the OS has abstracted data storage to some degree, it still treats A: and B: differently, in such a way that allows them to be removed from the system without altering the OS, caching them differently, and due to early viruses treating their boot sector with more caution than the hard drive's boot sector.

For Windows specifically, it's worth mentioning that you can use A: and B: as the names for volumes, be it a flash drive or an internal hard drive.

A: and B: were used for floppy disks.

Less an answer, more of an anecdote. In this Microsoft article, it says:

So when I built a new computer recently with two internal drives, one for the OS and one for data, I thought, hey!, I'll make my data drive "A". I felt all rebellious until I discovered that Windows will not index drives lettered A or B. :( Took me quite a while to figure out what the problem was, but I found some other people who suffered the same issue when they used A or B for a drive. As soon as I assigned that drive a different letter, windows indexed the drive. So much for being rebellious. lol.

The two horizontal slots on the front of this PC are the A: and B: drives (5.25" floppies in this case). Note that you had to physically "mount" the disk by turning the lever on the front of the drive. Ahh, simpler times. 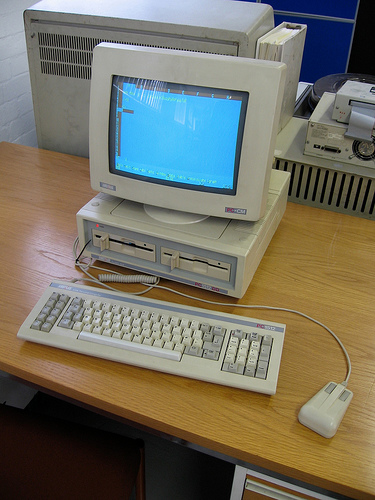 Source: How to change drive letter assignments in Windows XP

Back in those days the only conventions that were pretty much universal were set by CP/M (for example, the disk naming on the Apple-2 and Tandy TRS-80 was something different again... I once used a TRS-80 with 4 floppy drives... oh the power!).

With something like CP/M the first hard drives, when they came out, just appeared as the next available drive letter.

MS-DOS, for reasons best known to itself, allocated 2 floppy drives pretty much universally and placed the hard drive at C:

This is PROBABLY because the early IBM-PC's running MS-DOS all had 2 floppy drives, so this was a natural configuration.

This convention has been preserved since, though as pointed out here numerous times - in windows - you can change this. As far as I know in MS-DOS you can't.

Back in the 1980's it was pretty common on these early machines for disks to be a mixed bag of different types with legend incompatibilities. The IBM-PC imposed a bunch of standards with the format of its 5.25 inch floppies - before that you had all sorts of different arrangements with hard and soft sectoring, number of sectors / track, number of tracks, etc etc.

Data interchange between machines using floppy disks was a very hit and miss affair, which only got sorted with MS-DOS and the IBM-PC. The most reliable way to transfer files between machines back then was to write some programs (in assembler) to to file transfers using the serial port, and then wire them up. It was never very slow, because files were never very big.

My favourites from then were the high density drive my employer bought - it was an 8 inch floppy attached by a huge long ribbon cable. I think it stored about 200K, which was huge when developing software on a machine with 2 floppy drives, each of them 89K. Compiler on one, source and object code on the other. A compilation took minutes while the drives clanked away.

At the time the IBM PC was introduced you could get it running either CP/M-86 or MS-DOS, and there was no clear indication that one or the other would win. Eventually MS-DOS won the day - some bundling deals might have had a bit to do with that. The first IBM machine my employer bought did make things a lot easier... and the port of stuff to MS-DOS was pretty easy - mainly because of the same conventions for disk drive letters, and also because the system calls to read / write files and populate file control blocks (remember FCBs and the weird format they had in memory?) was the same.

C: wasn't rigid in MS-DOS as the first hard drive. Heath/Zenith MS-DOS had AB reserved for 5" floppies and CD reserved for 8"floppies.

The first default hard drive partition was E, Whether you had floppies installed or not. Their version also allowed 16 partitions on a single hard drive.

I think they may have been the first multi-booting systems as well. Hot-keys during the boot process would allow you to boot from any drive or partition, allowing custom environments and launching CP/M-85, CP/M-86, MS-DOS, Concurrent Dos or HDOS.

A and B were used for floppy disk drives. As far as I'm aware, there are two because the older computers (with no hard drives) would boot the OS from A:\ and run applications from B:\

They are floppy drives. If you're curious to the order of the drive assignments, wikipedia has more information http://en.wikipedia.org/wiki/Drive_letter_assignment

If I remember correctly on my DOS systems they were used for floppy drives but B:\ was not generally not an actual physical floppy disk but rather a virtual one.

It was a virtual floppy used when copying a floppy when there was only one drive. So you would copy from A:\ to B:\ but keep taking the source and destination disks out of the same drive as the memory buffer got full.

A: was the boot device in the 8-bit CP/M operating system. It predates even the earliest MS-DOS. If you had a second drive, it was B:. A third would be C:, etc. Systems didn't have hard drives then. CP/M was originally targeted to the 8080 processor. CP/M was created in the 1970s. The very first small winchester disk drive was the ST-506 which boasted a generous 5 MB (five megabytes) of storage. They were expensive but they were fast (compared to what we were used to). Oh, and the primitive file system didn't have folders or subdirectories. There was no A:\. It was just A:.

While it is clear that these are used for legacy floppy disk drives, I should note that they're still used to this day by default for these ancient storage media: 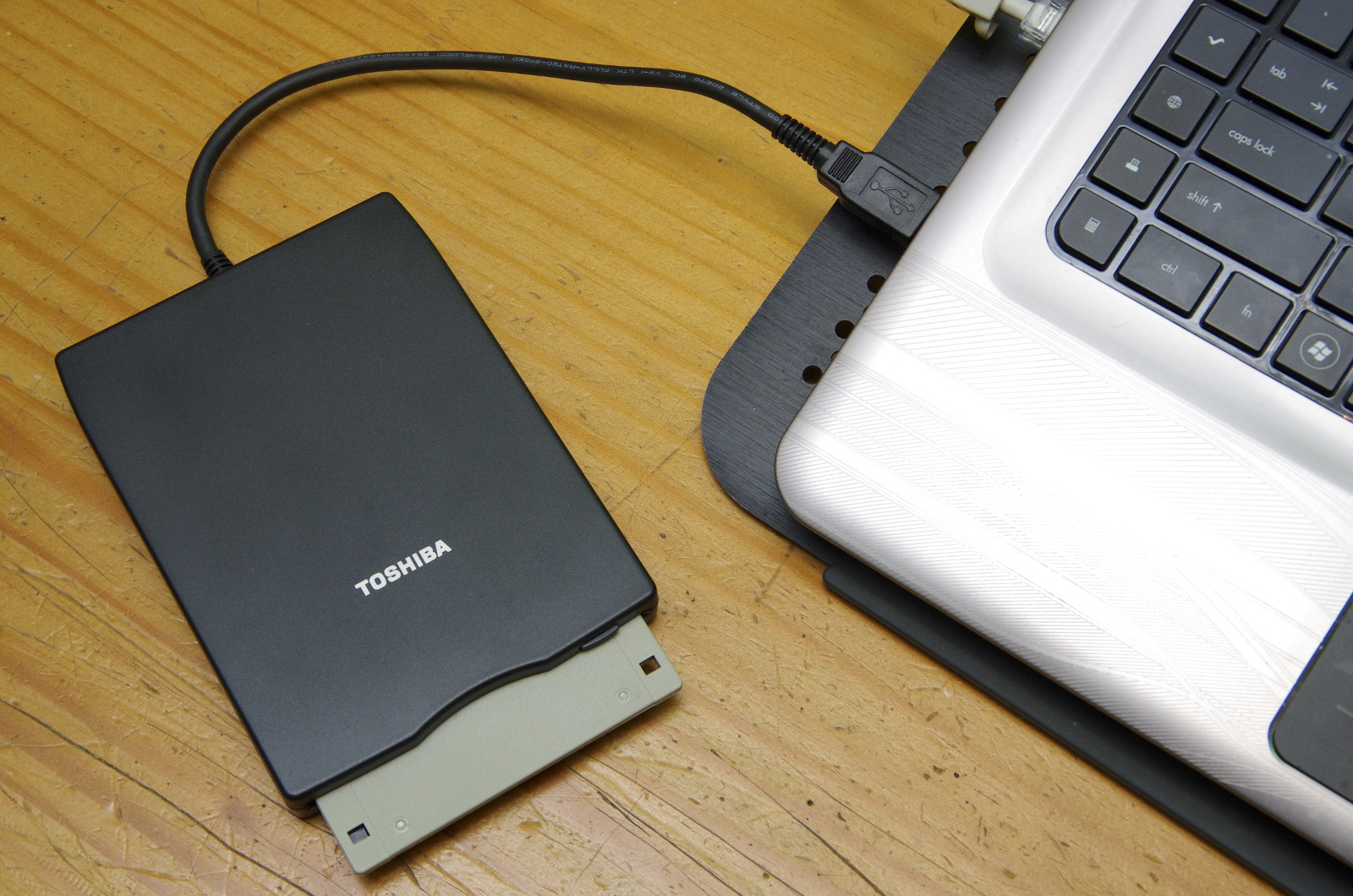 They are a legacy from the DOS days - A: and B: were the floppy disk drives that were standard on the original IBM PC. C:, the hard drive, was the third disk. Today, of course, nobody has floppies.

A:\ and B:\ still defaults to floppy drives, of course only visible if you have one installed (only have that for fun in some of my virtual machines)

Lots of good answers already, but they all refer to floppy drives in the past tense. The fact is that floppy drives are still sold, though I have no idea who buys them.

Another fun fact: if you have a single physical floppy drive installed, you actually have both an A: and B: drive. If you do

the system prompts you to insert the A: or B: floppy as needed.

Primitive by today's standards, but still a step up from storing data on audio cassette!

The first pc I used professionally was an Apricot Xen. The internal hard drive was A: and the 3.5" floppy was B:. This was back in the day of MS-DOS 2.11, before Ibm pcs came along.

Not the answer you're looking for? Browse other questions tagged windows hard-drive or ask your own question.

11
Is it safe to use letters A and B for drives?
5
Why is the system partition C:\?
2
Why does Windows use C:
1
Why OS is installed on C: drive by default?
32
What happened to the B: drive in Windows and why does the hard drive default to C?
35
What is Internet Relay Chat?
14
Can I install Windows 7 in A:\ or B:\ partition names?
5
Why start at C drive in modern computing?
5
What are the Windows G: through Z: drives used for?
4
Why Hard disk labeling starts with C rather than A?
See more linked questions

14
What determines the order of hard drives?
2
Boot utilities for 3 TB hard drives
8
Bootable USB stick with Truecrypt
5
What are the Windows G: through Z: drives used for?
0
My PC has problems noticing drives and booting Windows 8.1
0
Dual booting USB for Windows and Linux
0
Drive letters messed up in Windows 7. How do I get my drive letter back?
1
Drives missing from “This PC”, yet they are Online and have a letter assigned
2
Is it possible to swap 2 hard drives and keep OS running without formatting?
2
How to list just hard drive partitions on windows (except dvd-drives)?