How do I create a Windows Batch file that does not show the Command Prompt when executed? [duplicate]

I have installed a ruby gem called Redcar, which is launched from the command line. When it runs, it steals the shell until it terminates, so I have to create a new shell window to continue doing command line work. The shell I'm using is the GITBash shell from MySysGit.

I found a Redcar.bat file which is meant to launch Redcar as a shortcut, I presume, but I don't want the extra command prompt window to open whenever I launch the BAT file.

How do I just run the BAT without seeing the prompt?

You can't -- executing a batch file with the built in Command Prompt is going to keep a window open until the batch file exits.

What you can do is take steps to make sure that the batch file exits as quickly as possible. If at all possible, modify the batch file to run whatever program with the start command. By default, start returns immediately without waiting for the program to exit, so the batch file will continue to run and, presumably, exit immediately. Couple that with modifying your shortcut to run the batch file minimized, and you'll only see the taskbar flash without even seeing a window onscreen.

One caveat to this is that if you're running a console-mode program, which many script interpreters are, the batch file will wait for the program to exit, and using start will spawn a new console window. What you need to do in this case is run the Windows-based version of the interpreter instead of the console-based one -- no start necessary. For Perl, you would run wperl.exe instead of perl.exe. For Python, it's pythonw.exe instead of python.exe. The old win32 Ruby distribution I have downloaded has rubyw.exe, which should do the same thing.

A final possibility is to use a 3rd-party tool to run the command prompt with a hidden window. I've heard of such things but never had a use for them, so I don't know of anything in particular to point you to.

I think this is the easiest and shortest solution to running a batch file without opening the DOS window, it can be very distracting when you want to schedule a set of commands to run periodically, so the DOS window keeps popping up, here is your solution. Use a VB Script to call the batch file ...

Copy the lines above to an editor and save the file with .VBS extension. Edit the .BAT file name and path accordingly. Then just run the .vbs file and the magic happens!

You can create a task on Task Scheduler then in the Action should be Start a program then select this .vbs script you created. Depending on your requirements the other properties you can fill and save.

You can run another batch file with START /MIN CMD.EXE /C mybatchfile.bat from within the command prompt.

From outside it will bring the cmd console window but to avoid that, you can create a shortcut file with properties modified to start minimized.

Continuing on Dennis Williamson's answer, you can edit the batch file and append (prepend) START /B to the command you are executing.

For example, I have a batch file that runs putty and had the same problem (extra CMD), so this is how I wrote it:

To do this, use the program Bat To Exe Converter to convert your batch file to an executable file.

When converting into an executable, you will find an option to run your file as an Invisible application in the visibility section. Thus, when you run it, it will run without a window. 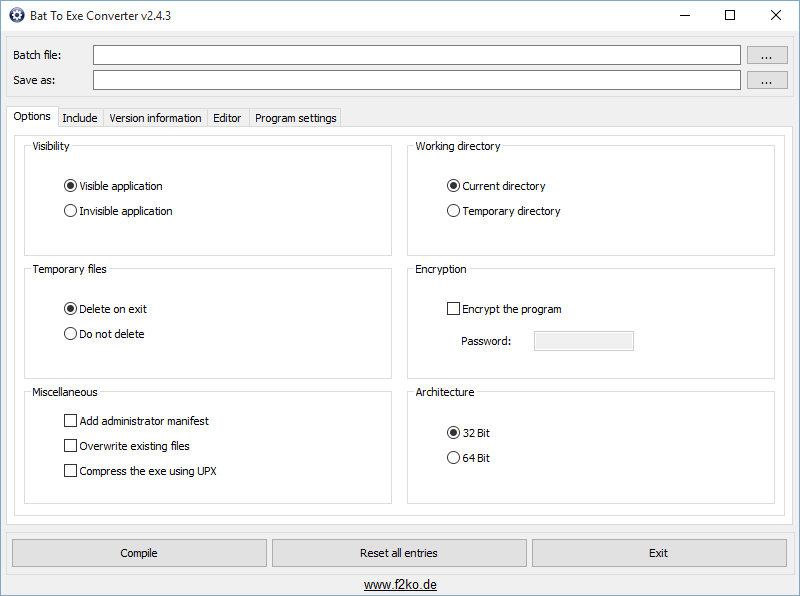 Give this a try:

I'm not clear as to your issue, but with some of my batch files, I use a "dumy" who's only purpose is to launch the main batch file.

The exit closes the command prompt window that would otherwise remain open.

And GO2.BAT will have the actually batch file contents that I wish.

Just put the /b switch in front of the path. It won't open the second command prompt.

Indago's answer has been the best solution for me so far. The VBS file allows me to run the batch's functionality through the script, preventing the CMD window from happening in the first place. There are a few caveat's though:

With that said, I'd put a little mock set-up/unit test up first to make sure it's working exactly the way you want it to, before integrating it.

I've used cmdow in the past, and it seems to have worked for what I want.

You'll probably want to use one of the following options: CMDOW [window] /HID

149
How to run a batch file without launching a “command window”?
2
Close command prompt after executing batch file
2
How to create shortcut that sets an environment variable and then starts a program without leaving CMD window open?
164
Run a batch file in a completely hidden way
85
How do I do comments at a Windows command prompt?
24
How To Execute Cmd.exe Silently?
2
Is it possible in windows or microsoft teams to rotate the webcam feed 90 degrees?
0
Running Windows Batch File without Popup