Determine which tab in Firefox is using CPU resources?

Is there anything in the current Firefox similar to the Task Manager in Google Chrome? (Shift + Esc)

There is something that occasionally takes up enough CPU to make Firefox unresponsive - but with multiple windows, each with a dozen or so tabs open, trial & error is going to take a while.

Resource usage can be monitored via the about:performance page which goes as Task Manager since Firefox 64. It had a major overhaul and now gives much more detailed insight into the performance of tabs and add-ons.

about:memory shows Firefox's memory usage details. There's also a button on that page that allows you to minimize memory usage.

Then it may be rogue Javascript code. Firefox's Javascript Deobfuscator extention lets you watch the count of Javascript function calls : 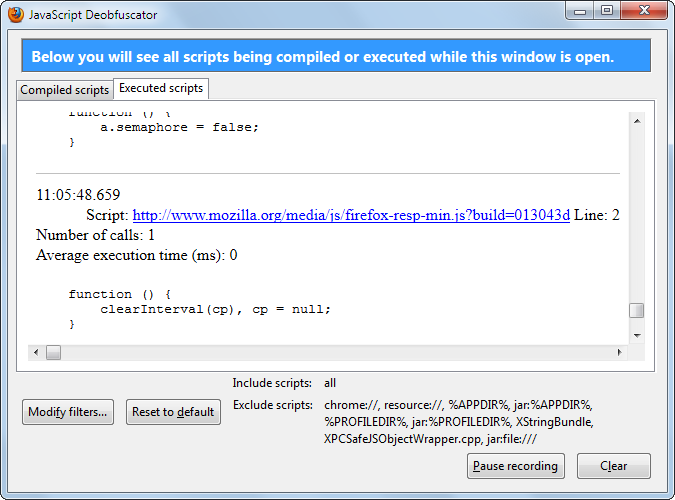 It is not a measure of CPU usage, but a close enough proxy : find the function with a runwaway number of calls and you will likely have caught the culprit.

By using Flashblock and Nevercrash, now replaced with FlashStopper and UnloadTab you go a long way into blocking Flash or tabs, preventing CPU waste instead of tracking it. This holds, but less, for memory too. Flash, e.g. Youtube is prevented to start until you click on them, so you may launch them in several tabs and they wait for you to open the tabs. Tabs are uloaded from memory and idle until you reopen them and they are refreshed from the cache (if still available).
Shutting down the Internet for a while also works during the time you don't need it ;-)
Firefox fragments virtual memory so much that it's using an excessive amount of real memory (there is too much unused virtual memory in real memory). One needs to periodically stop and restart Firefox with the same pages. That will defragment its memory and the whole system will run faster by reducing the swapping.
On my Ubuntu system, real memory usage slowly climbs up to 98%. Then it's time to stop Firefox and restart it: it will then use less than 1MB of real memory instead of 3MB. The same holds for Thunderbird..

Except for already mentioned about:performance, there is a Task Manager addon that meant to be a clone of Chrome's Task manger. 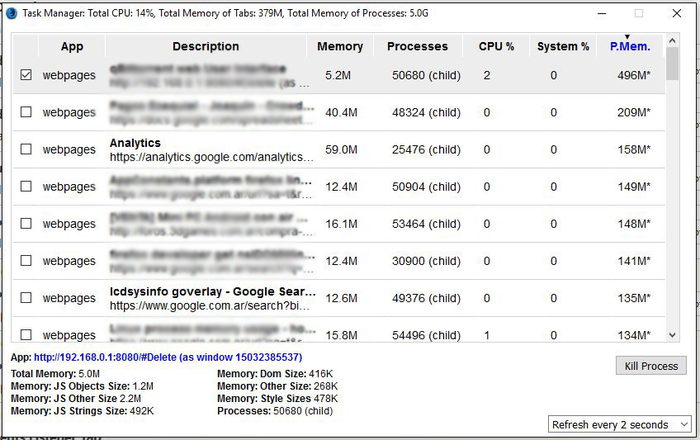 The following answer to another question may help you. The answer is written by the user "accolade".

XUL Profiler is an awesome extension that can point out extensions and client side JS gone bananas CPU-wise. It does not work on a per-tab basis, but per-script (or so). You can normally relate those .js scripts to your tabs or extensions by hand.

It is also worth mentioning that Google Chrome has built-in a really good task manager that gives memory and CPU usage per tab, extension and plugin.

Let me add some more info to accolade's answer. As of January 2012, the latest version of XUL Profiler is 1.0.4, released December 2008. It's only certified compatible with Firefox 2.0 - 3.6.*. So it clearly needs a new maintainer.

I wonder if there's any way to force the extension to work on newer Firefox versions.

Also, I wonder if it works well to downgrade Firefox temporarily in order to use XUL Profiler with your existing tabs on a certified-compatible Firefox version.

Here around 20% cpu was not accounted for by about:performance .

Turning off "Enable add-on debugging" checkbox in about:debugging got rid of this extra cpu usage. 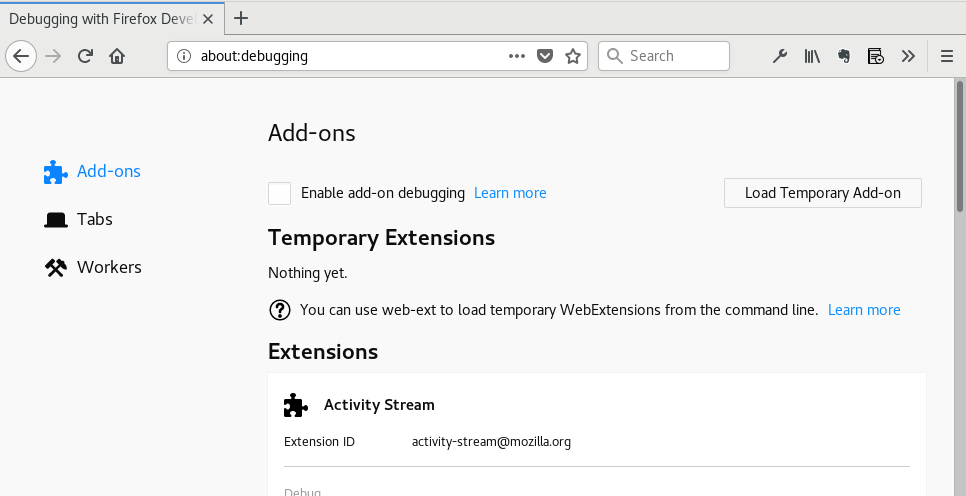 You could also turn off this add-on debugging in about:config. Set either devtools.chrome.enabled or devtools.debugger.remote-enabled - or both - to off.

about:about will list the about pages which may help you.

Relevant to the specific question, as some mentioned already:

Do you have Flashblock or NoScript installed? Especially if not, I'd try to look into the flash-heavy tabs first. I've also seen lots of eBay tabs grind Firefox to a halt, albeit that was a while back (when I was actually using eBay). 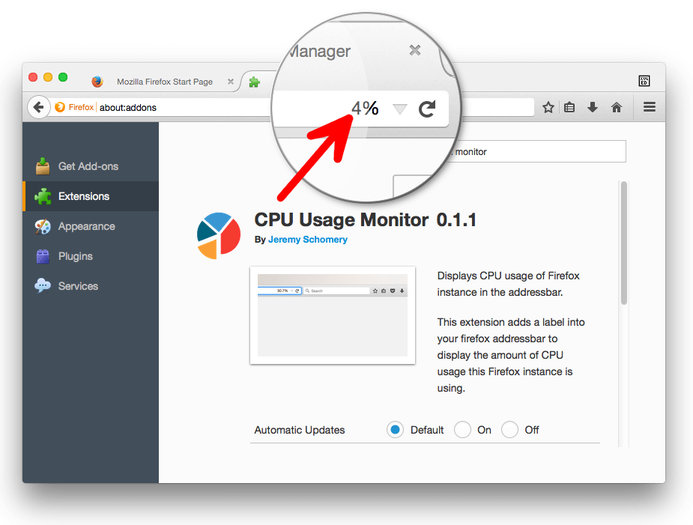 39
Task Manager for Firefox (like in Chrome?)
36
How to find out which Firefox tab is using most CPU or memory?
13
Check CPU usage by tab or by add-on on firefox on mac
10
Firefox (on windows) constantly consuming 10% CPU - is there an add-in to find the rogue tab?
93
Is there a way to identify the busy (CPU-consuming) tab in Firefox?
16
"Task Manager" addon for Firefox?
13
Can Firefox tell what it uses CPU for?
14
High CPU usage from Firefox and poor overall performance
12
Is there a way to limit cpu usage per tab in Firefox?

2
How can I find out how much RAM my plugins/extensions are using in Firefox 5?
14
High CPU usage from Firefox and poor overall performance
12
Is there a way to limit cpu usage per tab in Firefox?
1
Firefox eats my CPU as a background process
2
How to find which Firefox tab is playing audio without installing extensions?
3
Chrome: How to identify which tab does a subframe belong to?