I've got a bash script, potentially many of them in fact, which I'd like to be able to open files in OSX's finder with.

It's a really, really simple concept but for some reason bash scripts are greyed out in the finder 'open with' dialog.

I gather that there are various ways of using applescript or packaging as an app... but I haven't been able to figure any of this out and I don't really want to have to pick up another language just for this trivial task - could someone spoon feed me how to do this?

It's not possible. Launch Services works with application identifiers, and bash scripts don't have them.

You need to create a wrapper application using Automator.

You can see the effect this change has on ~/Library/Preferences/com.apple.LaunchServices.plist when you Change All: 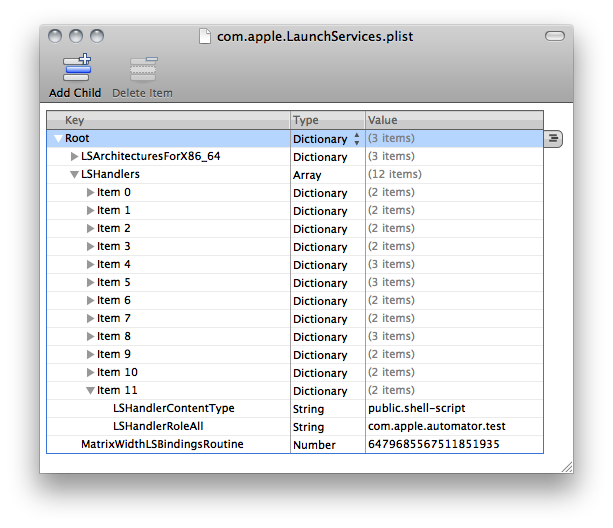 ("Test" is the name I gave my Automator application)

I followed Daniel Beck's instructions with a few modifications and got this to work for URL files which I wanted to open in Chrome (Firefox would also work) on a Mac.

The script I used is:

This parses out the URL= line from a typical URL file which looks like:

Save the Automator script someplace like your ~/Library directory. I called mine OpenUrl.app.

Now go to a url file somewhere and open the "Get Info" popup. Change the Open With command to your OpenUrl.app script. Test with just one or click the "Change All..." The first time I clicked that it gave an error, but seemed to work the second time.

In developing this I did get the "Run Shell Script" errors, but that was because of actual errors in the script. I think the key issue with Daniel's script is that it doesn't handle spaces in the file name you try to open.

Once installed, use it in the bash script like so:

Not the answer you're looking for? Browse other questions tagged macos bash script or ask your own question.

8
How can I make terminal VIM my default editor application in Mac OS X?

10
Mac OS X - Problems with file permission into NTFS usb drive
88
How to keep only every nth line of a file
2
Bash script with grep -w
0
Switcher bash script
0
How to get the Default browser name in mac osX using a bash script
0
restart bash script on exit(1) from php script?
0
Batch export selected videos with QuickTime Player 7 using specific export settings?
0
Get Python Version with Bash Script
0
How to append a carriage return to replacement text in osx bash script