A while ago I started having trouble with my optical drives. Both of them keep showing up in Explorer as CD/DVD drives on boot, but as soon as I put a disc in either one, it suddenly turns into a hard-drive—“local disk” is displayed in the Type column, though the File System column remains UDF/CDFS. (I though that maybe it was a permission issue on the registry key in HKLM\System\CurrentControlSet..., but I’m not so certain because of the next test.)

Here’s a screencast of My Computer; when I put in a disc, the DVD drive magically turns into a hard-disk and cannot be opened.

I’ve tried uninstalling and reinstalling the devices without success. The security dialog indicates that there are none set for the drives (no owner and no permissions). I tried setting the owner, but am only able to do so if there is a disc in it (it complains if it is empty), but the settings do not stick (if I immediately open the security dialog after setting it, it is empty again). I tried setting permissions, but that gives an error.

I’ve included a screencap-flowchart of the security dialog of one of the drives below.

I suspect that the problem is with the registry entries related to optical drives in HKLM\SYSTEM\CurrentControlSet. For example, the Properties subkey in HKLM\SYSTEM\CurrentControlSet\Control\Class\{4D36E965-E325-11CE-BFC1-08002BE10318} is conspicuously absent. Worse, I cannot figure out what should be in it or import one from a backup hive because the Properties subkeys in …\Class have some sort of “super-admin” permissions—I cannot even view the permissions or owner on these! It does say however that I can change them, but I don’t know what account owns or has permissions for them (my guess would be TrustedInstaller—or something).

(Yes, I made sure that there are no upper- or lower-filters, and yes, I ran sfc. I also made sure that in the policy editor, “devices: restrict CD-ROM...” and “removable storage access” are not set.)

Does anyone know what the owner and permissions are supposed to be for optical drives and how to reset them? 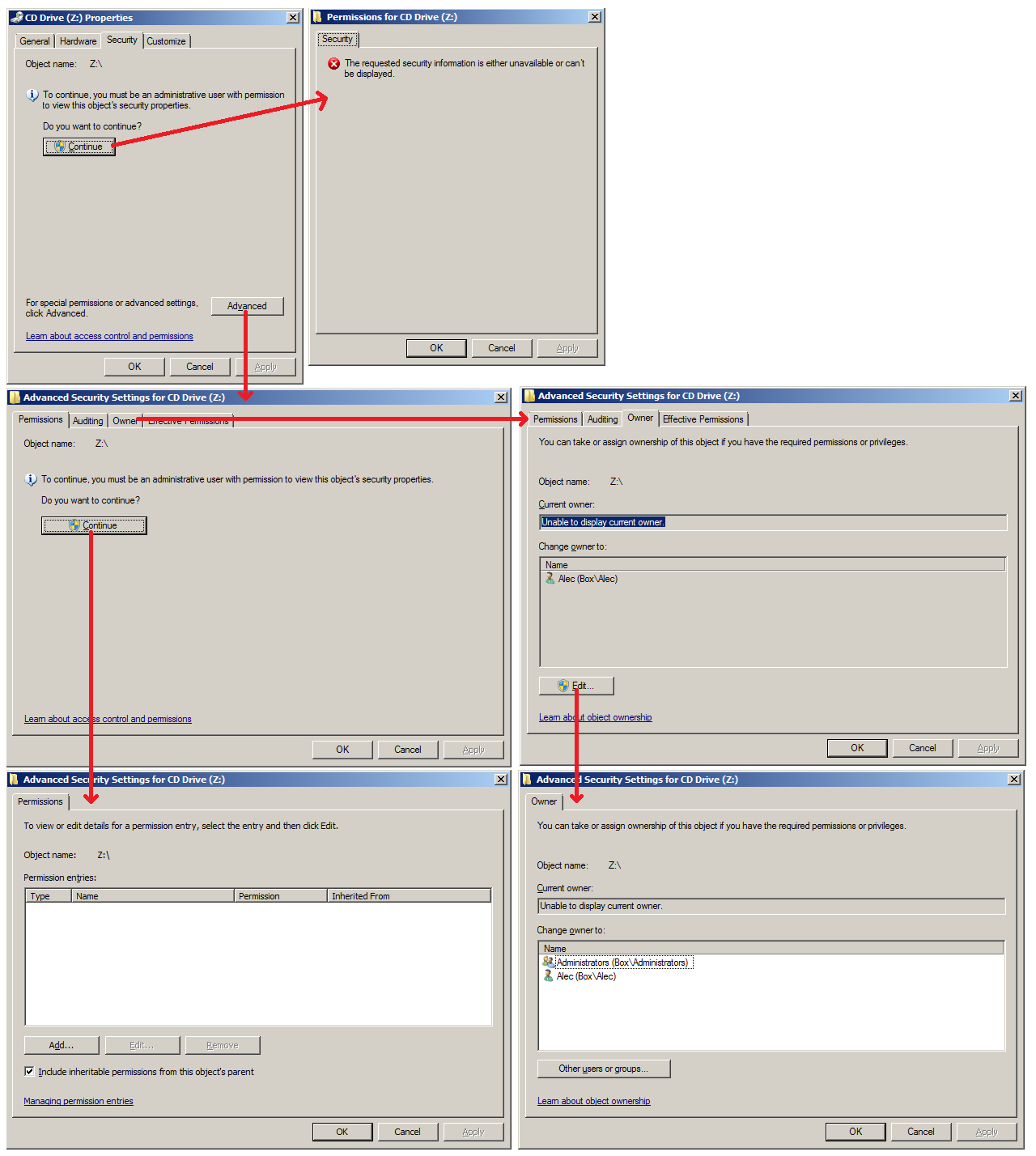 This behavior is very puzzling, so all I can offer are some hints and more questions.

It would help to know whether the CD/DVD drive is shared. If it is, maybe unsharing can help.

Second, whether you have a CD-burning software installed, such as Nero. You might try to uninstall such software to see if this makes a difference.

Third, run gpedit.msc and check Computer Configuration / Administrative Templates / System / Removable Storage Access. Verify that "CD and DVD: Deny read access" is disabled or not configured. In effect, all the options should be not configured.

You might also try to see what happens with "sfc /scannow" as described in
How to Repair Windows 7 System Files with System File Checker.

The last resort is following How to Do a Repair Install to Fix Windows 7, which will refresh your Windows files without requiring the reinstallation of applications.

Well, it turns out that I was right; it was indeed the missing Properties key in HKLM\SYSTEM\CurrentControlSet\Control\Class\{4D36E965-E325-11CE-BFC1-08002BE10318}. It took several steps to fix, but actually not that long overall (especially compared to the three or so weeks I’ve been living with and working around the problem).

It works correctly now (I can watch a DVD without having to rip it to the hard-drive or running the player in administrator mode, or I can install a game or program without having to open an admin command-prompt to install or even copy the whole disc to the HD).

I guess my instincts were correct from the start. If I had the time—um, at the time—I would have rolled up my sleeves and dug into that inaccessible key like I usually do. Thanks to harrymc for insisting on the key being accessible and pushing me to copy it.

(I’m still not sure what caused the problem in the first place. I do recall that there were other issues with the optical drives just before the key got deleted—Device Manager had kept marking them with an error/warning—and I recall trying various ways to forcibly uninstall the drives in an attempt to get Windows to detect and reinstall them correctly. It stands to reason that one of the forced uninstallations somehow managed to delete the key; it didn’t exactly improve the situation. On the bright side, the drives are no longer marked with warnings in Device Manager.)

Today there was one 13-byte file on a CD I couldn't read on windows 10 home. However after creating a ISO-file (using BurnAware), I was able to extract it from there (using WinRAR).

I faced the same problem , what i did was:(Windows 7)

Right clicked, then click new, then create a new key. Then rename it to Properties. In Properties create two new dwords

Then Uninstall the driver of cd/dvd from Device manager.

I found that the Initio default controller" in the device manager needed to be uninstalled, including the driver files. After that the external USB DVD drive suddenly appeared again.

Not the answer you're looking for? Browse other questions tagged windows-7 windows-explorer permissions dvd or ask your own question.

0
What to do when a Windows doesn't recognize a movie DVD while that disc can be played on DVD player?
2
DVD drive not visible in Explorer
3
DVD R/RW Drive Would only read CDs not DVDs
1
Access denied when writing files to network drive
0
Cancel AVG through task manager gives "Access Denied"
0
DVD Rom is not detected under Windows 10
0
Dvd Drive won't recognize blank CD