Why does WMI Provider Host (WmiPrvSE.exe) keep spiking my CPU?

I generally keep my laptop on 24x7, and at the end of the day it's really annoying to have my thighs burnt because over overheating.

The overheating seems to be a result of WMI Provider Host (WmiPrvSE.exe) spiking the CPU utilization to 25% every few minutes. Why does this happen?

I have an HP Envy 14 (with the HP bundled crap) running on Windows 7 Home Premium.

(Note: Based on @nhinkle's past observations, it seems that HP Wireless Manager might be the culprit, is there any way to confirm this?)

As Sathya mentioned in his question, I have had previous experience with this problem on my similar HP laptop, and I have now confirmed using the scientific method that the CPU spikes on HP laptops is caused by the HP Wireless Assistant. Or, HP CPU Assassin, as I may start calling it.

Overview of the Experiment

When I got my HP Pavillion dm4t laptop, I noticed that the CPU would frequently spike to as much as 50% usage, almost every other second. This was draining battery life, and heating up the laptop; much the same symptoms as Sathya has experienced. Just by looking at the Resource Monitor in Windows 7, I was able to see that the process WmiPrvSE.exe was at fault.

A quick google search confirmed my assumption that this was the Windows Management Instrumentation (WMI) host process. In short, WMI can be used to query for system information, like processor usage, running processes, who is logged on, and all sorts of other information. The WMI host process runs WMI queries for any other process making them, so WmiPrvSE.exe was not itself the culprit, it was simply an intermediary.

In order to hunt down which specific process was causing this problem, I used Systinternals Process Explorer. I found which instance of the WmiPrvSE.exe process was using a large amount of CPU, and clicked on it to open detailed information.

Unfortunately, I couldn't see any way to find out what process was making all the queries, but since I had isolated this as the source of the CPU spikes, and knew it was a service, I went to the services manager to see which services depended on WMI, thinking that might lead me to another clue. 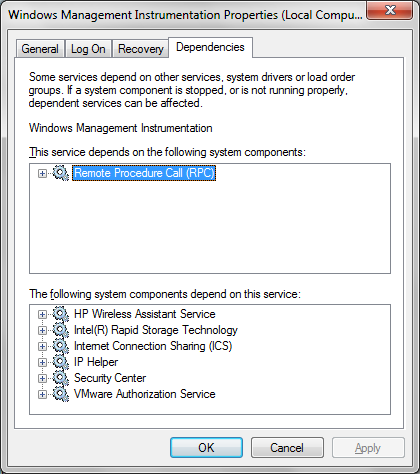 I figured that it wouldn't be a built-in Windows service causing the problem, so eliminating those, I decided to work down the list and try disabling each service, and seeing if the problem persisted. Right on top of the list was the HP Wireless Assistant Service. I went back to the services menu, and disabled that service. Looking back in the task manager, I saw that CPU usage had gone to almost nothing. I the HPWA service back on. CPU usage shot back up. I now had enough data to form my theory. I uninstalled the HPWA service, and never had the problem again.

Several months later, Sathya asks this question. I decided to prove once-and-for-all that this was HPWA's fault. I reinstalled the HP Wireless Assistant, which I hadn't had installed in months. Right away, processor usage shot up. I then went through with the experiment outlined above.

First, I isolated the process responsible for the HPWA service in the Resource Monitor. HPWA_Service.exe and HPWA_Main.exe are the two. Here is what the CPU usage looked like with both of these processed running: 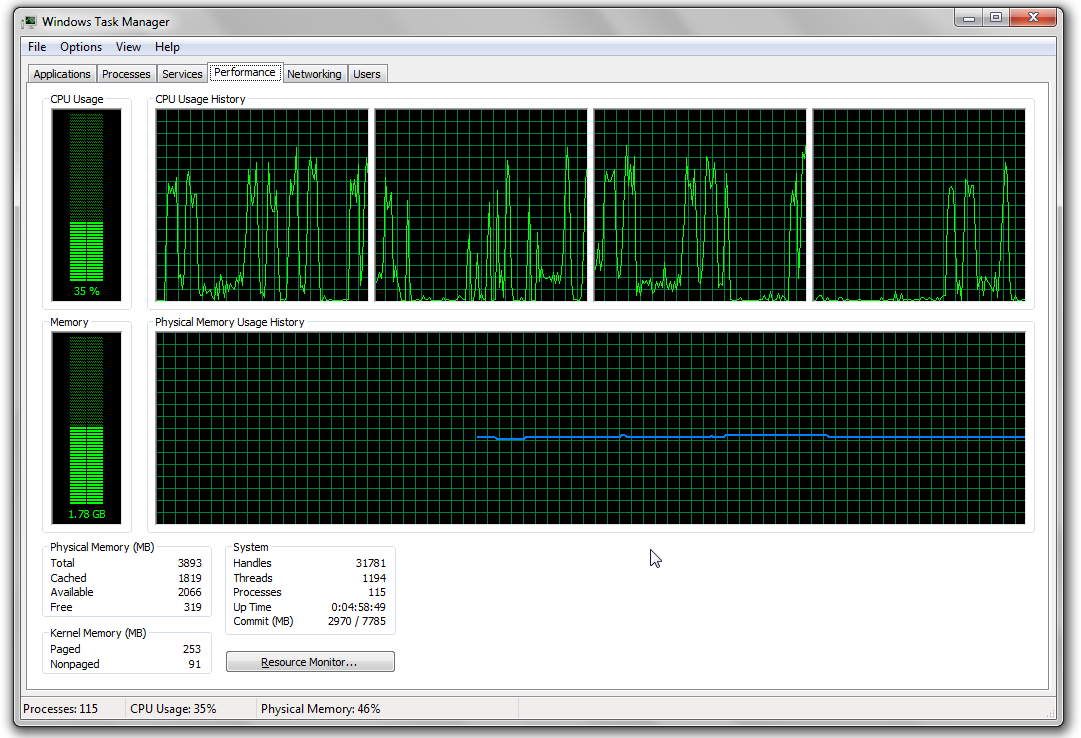 Then, I suspended both processes. The CPU usage immediately went down; here's what it looked like after a few moments for the previous CPU usage on the graph to clear: 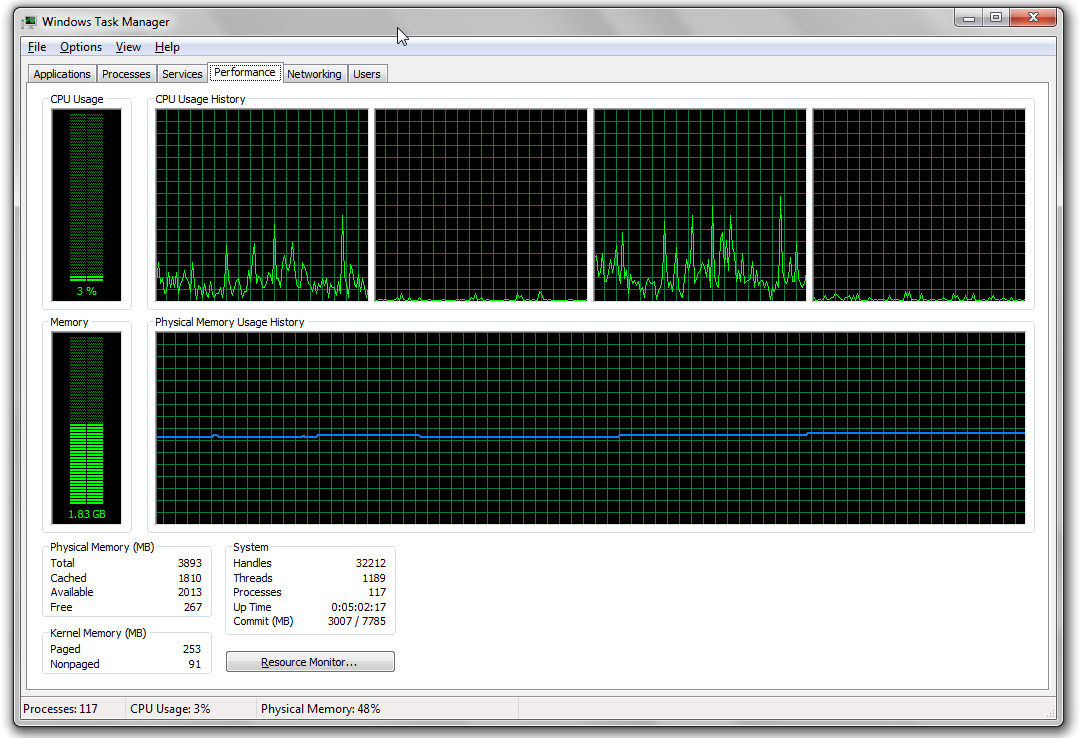 I enabled the processes again to see if usage would go back up. It did: 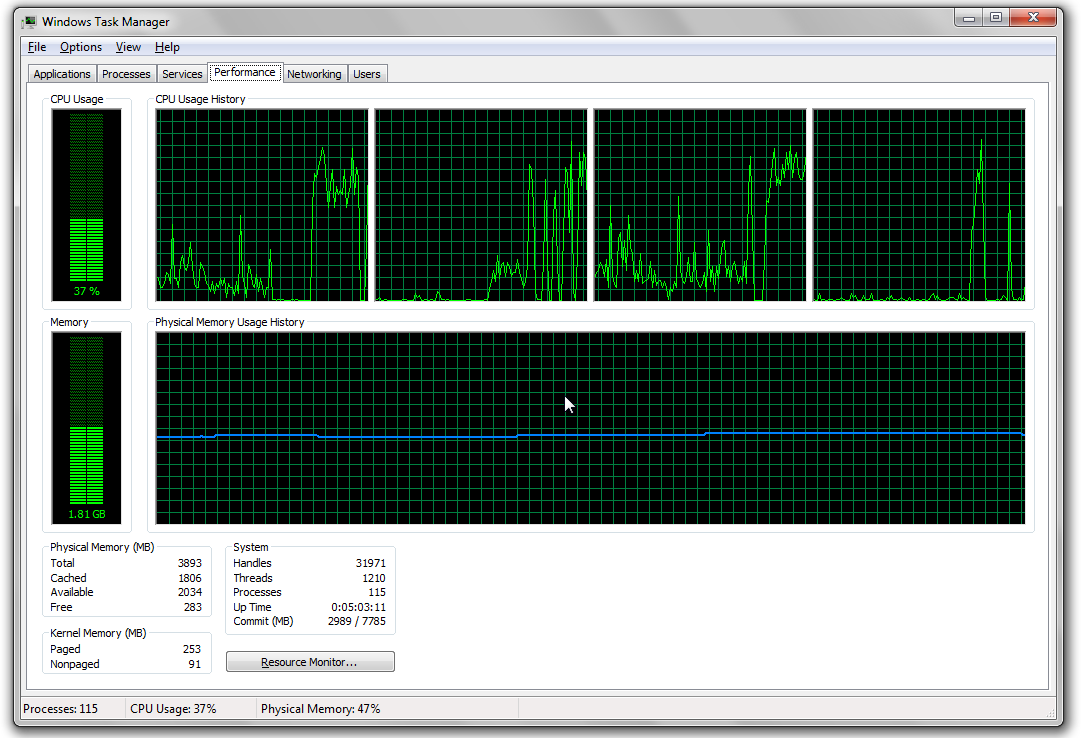 The first spike as I enable HPWA 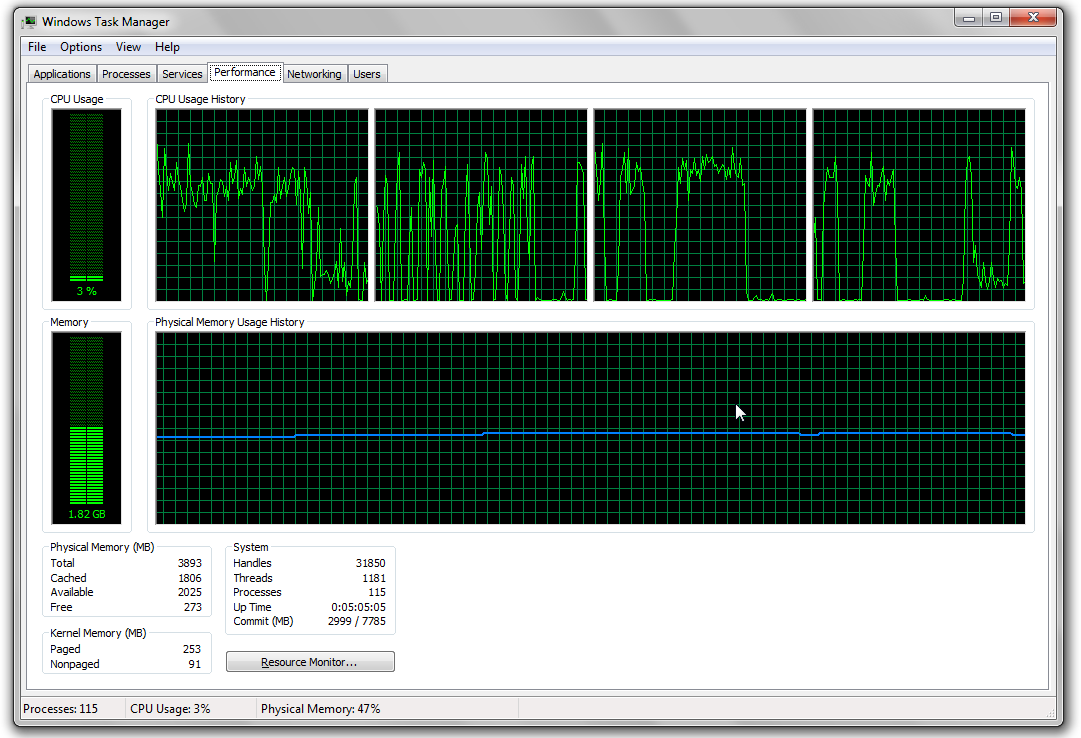 A little while after I enabled HPWA

Suspending the processes again resulted in the CPU usage going back down: 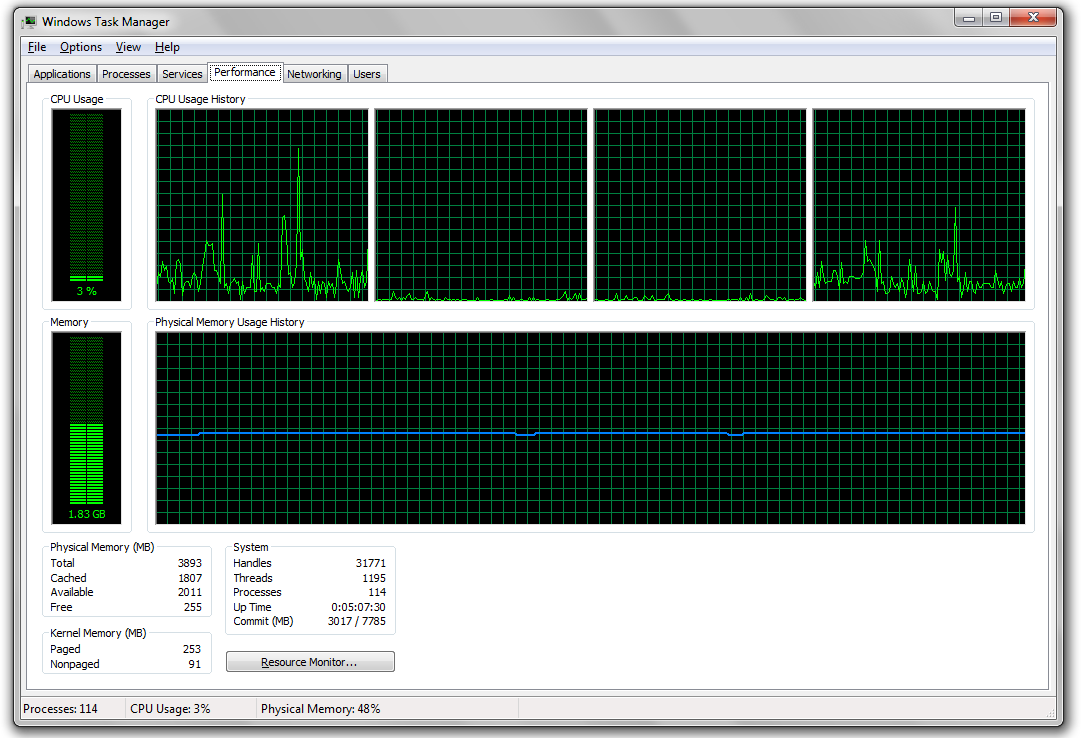 I tested this for one more iteration, and on the third trial, the same exact thing happened again. I considered this sufficient evidence to show that the HP Wireless Assistant was causing the problem, and subsequently disabled the service, and will now uninstall it.

All the HPWA appears to do is inform the user when their wireless is turned on or off, and gobble CPU. There is nothing you can do with it that you can't do with the built-in wireless management tools, so I would advise that if you have this software installed, you remove it.

+x to open the Windows Mobility Center, then click on the Turn Wireless Off button. 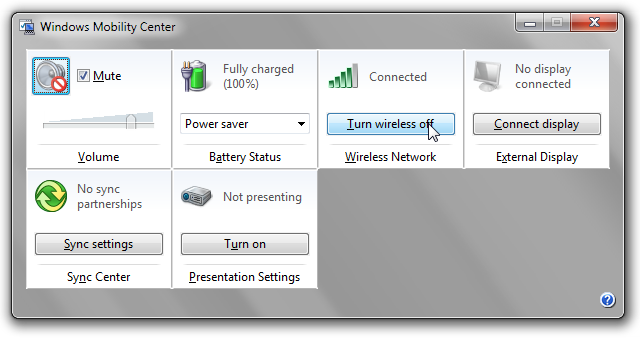 According to a discussion on the HP Support Forums, the problem has been fixed in more recent versions of the HP Wireless Assistant. If your laptop needs HPWA to use the wifi on/off button, you can download the latest version from HP's drivers website, and probably won't have this problem any more. Nevertheless, if you don't need it for the wifi on/off button, there still seems to be no added value from having this software installed.

Perhaps google a few of the top procedures of the stack to get a better idea what they do.
If they don't help you might need more advanced analysis. See my next section:

If you want me to look into it:

As WmiPrvSE.EXE is a host for running WMI queries against the CAPI store, you might not be able to find the cause even with XPerf due to IPC, another solution that I've just found would be to enable WMI logging and checking the logs as described here, the ClientProcessId would be the PID of the Process that made the WMI query. This PID can be tracked back to the process by adding a PID column to Task Manager or Process Explorer, or with tasklist /FI "PID eq X" where X is the PID you found...

In the Kernel, a new thread is started to handle a Remote Procedure Call stub, which in essence is a query request which the WMI Provider will execute and respond to. This results in a high CPU activity because of reading the Registry and/or Performance information.

As a dump is a capture of a single moment you won't be able to see which process performed the RPC.
So, you need a program that traces like XPerf to see the previous thread which would be doing the RPC.

Or, if you enable RPC State Information, you can use rpcdbg to see who initiated the call.

There is a lot more information in that article about RPC State Information that might help, but it's not for the faint-hearted like us to go through all that when we could just use XPerf instead. :-)

As we now know about the inner working of how the RPC works, we could as well use API Monitor:

Keeping your computer up-to-date is important, installing HPWA 4.0.10.0 solves this! ;-)

The Microsoft blog entry Is WMIprvse a real villain? shows how to find which process is responsible for the CPU that WmiPrvSE.exe is using.

The method uses the Event viewer option of "Show Analytic and Debug Logs" to trace all WMI activity, thereby getting the process-id of the guilty process.

Just adding this for anyone else in the same boat, this page is all over Google. I had the same issue with WmiProvderHost spiking CPU up to 50% and draining battery on my Lenovo Yoga2 Pro on Windows 8.1.

Following some of the excellent investigation advice above, I discovered the issue for me was actually GoPro Studio (free video editing software that comes with GoPro cameras). It installs a monitoring service which waits for you to connect your camera and for me this was the culprit.

To debug it, use xperf from the Windows Performance toolkit and run this cmd file:

Open the generated WMItracing.etl in WPA.exe and grag & drop the "Generic Events" graph from the left side to the analysis pane. 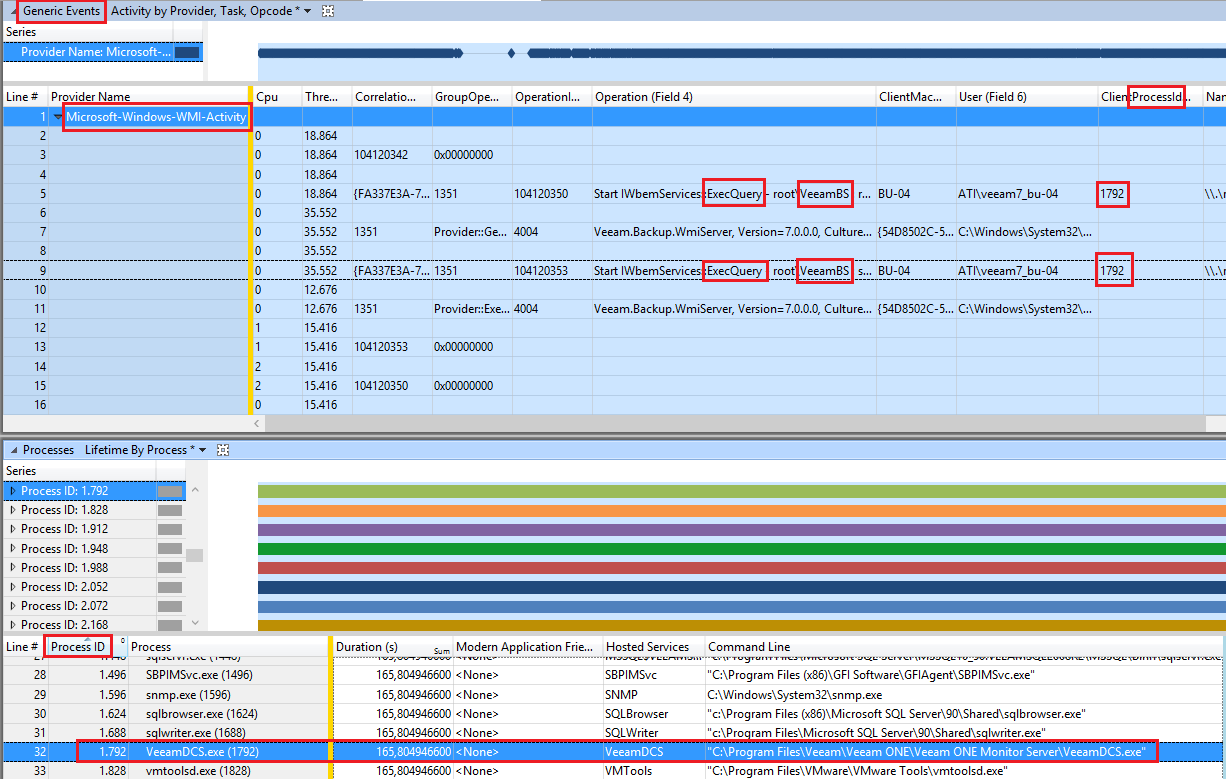 Now filter to Microsoft-Windows-WMI-Activity events only, and look for WMI operations and the ClientProcessId.

In my example it this CLientProcessId belongs to a tool called Veeam ONE Monitor Server. Stopping it, fixed the CPU usage issue.

And second example is shown here: 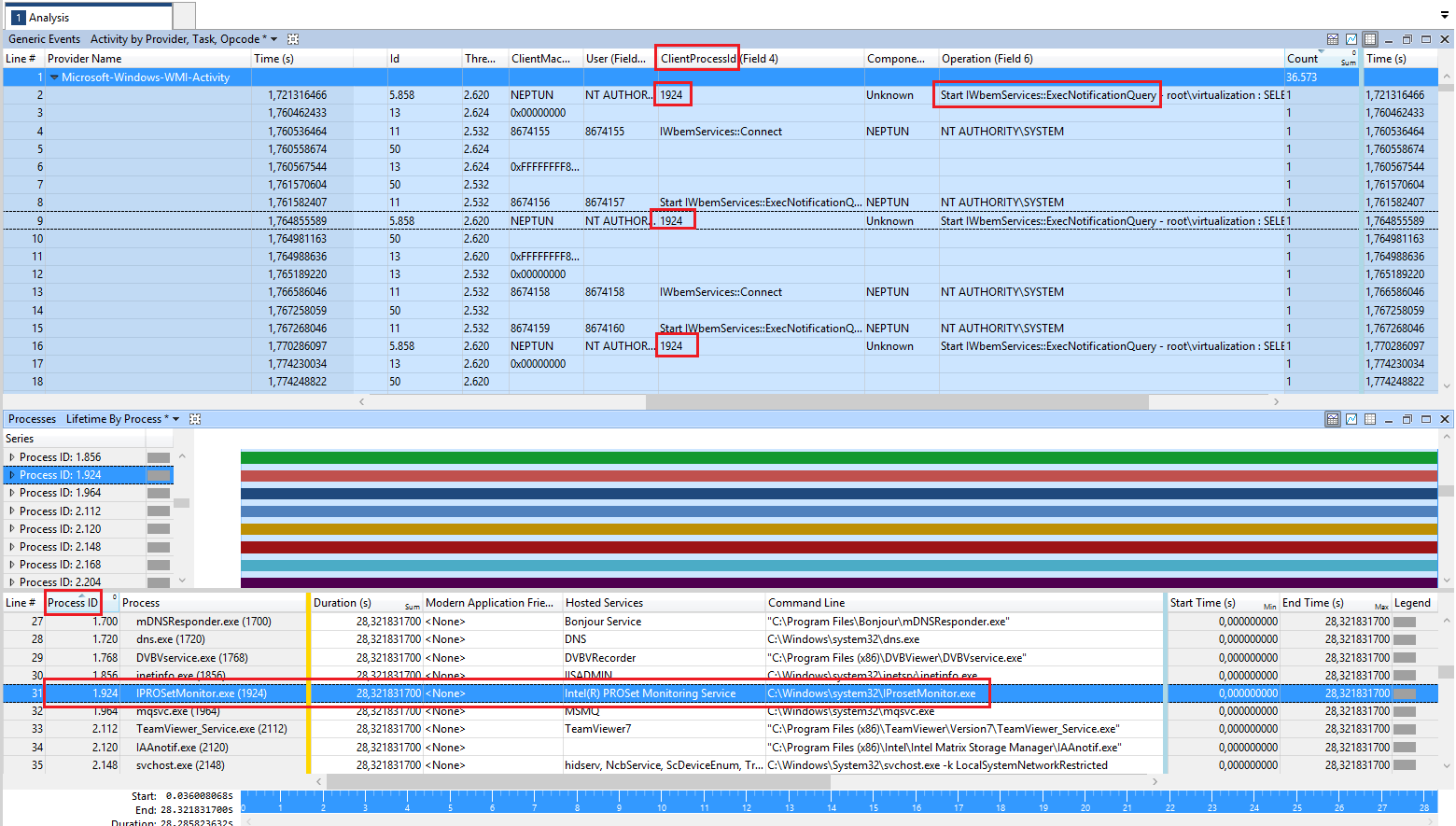 HEre you see reoccurring calls of a Process with PID of 1924 which belongs to the Intel ProSet Monitoring service.

Here the CPU usage is also shown in the CPU sampling callstacks:

So, the Intel tool does WMI notification queries too often and this causes the issues. Stopping it, fixed the issue.

Have you tried seeing if it's a virus? Some viruses really like to parade around as Windows services like that. Make sure the WmiPrvSE.exe process is located in the c:\windows\system32\wbem directory. If not, you might want to run general spyware detection programs. If it isn't spyware, it might possibly another service that's calling it. I know I have quick a few gadgets running on my computer, and ironically the performance monitor gadget sometimes makes my CPU spike a little. Also, it could be another service that presses that gas every now and then. For instance, bloatware from HP, Dell, etc.

Other than that, the other answer from TomWij seems pretty nice for troubleshooting it down!

For me, Garmin Express was the culprit. Quitting the application solves the problem.

Not the answer you're looking for? Browse other questions tagged windows-7 process wmi hp-envy or ask your own question.

1
Windows 7: Full usage of one CPU core by WmiPreSE for several seconds after resume or network changes
0
WmiPrvSE excess cpu on Windows 7 32bit
1
CPU usage jumps to 100% -> WHEN <- machine is idle (not the idle process)
2
HP Wireless Assisant causing high CPU usage
2
HP 4530s: Fan is always on even when laptop/CPU is Idle
0
Sensible debugging of WMI Provider/Service?
1
WMI provider host high CPU load
0
Constant CPU usage from services.exe, restarting a particular service fixes it, why?
1
System processes like DllHost.exe and WmiPrvSe.exe are slowing down Windows 8