Is there a Desktop Manager similar to Virtual Dimension?

Currently I'm using a very old version of Virtual Dimension with a several years old code base as desktop manager in Windows 7. It's open source, and has several benefits compared to several other desktop managers. 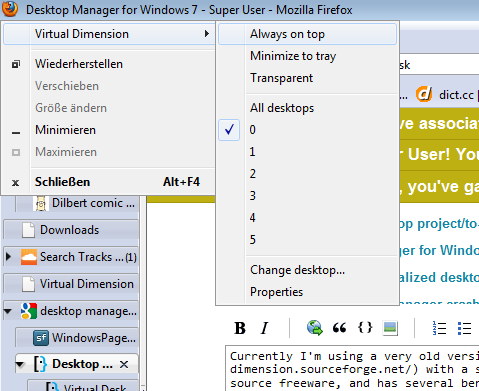 Does anyone know a similar desktop manager with at least these features? Has anyone heard of updates or clones of this project? Is anyone interested in continueing the development? Preferrably it shouldn't be a shell replacement.

Here are some alternatives that I found, but I'm not sure if they meet your criteria.

These were found at alternativeto.net

I hope one of these fits your needs :)

Not the answer you're looking for? Browse other questions tagged windows-7 software-rec virtual-desktop or ask your own question.