Where do these links in my generated PDF come from?

After converting a Word document to PDF using Adobe Acrobat Pro 9.9.3, I open the created PDF and want to highlight the hyperlinks in the document so that the user could see that there's something clickable.

In general, this works fine, but there's strange stuff in the TOC of the document (the TOC was created in Word): 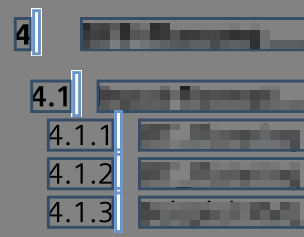 EDIT:
Obviously this is caused by my styles for the TOC, but I can not figure out, what it is...

EDIT 2:
After playing around with the formatting of my TOC styles, I figured out that it only happens, when my selected font size of a style is smaller than 12pt. Maybe this helps anyone to provide me an answer. I refuse to believe that changing the font size of the TOC entries results in different hyperlinks...

EDIT 3:
I had a look on the styles used in the resulting TOC:

Green marks text formatted as hyperlink, red marks text being formatted as toc-style-1 (or whatever this may be called in an english Word). I think, this might be a cause but I'm giving up now, waiting for the brave guy that understands what's going on.

EDIT 4:
Answering questions asked by Arjan in his comments:

Seems to me that every line has a single hyperlink, covering the number, Tab character and its title. Next, in the PDF, this is split up in three parts, due to the absolute positioning of the text in the PDF. I'm quite sure you'll get a Tab character when copying that second hyperlink.

Solution for me is to change the formatting of headings (not of the TOC elements): When I change the character after the chapter number from TAB to SPACE, the generated TOC is as I expected it.

0
How to use a different list number format in TOC?
7
Hyperlinks on images in PDF from Word 2010
0
maintaining caption numbers in PDF when converted from WORD
7
Save Word document as PDF, how to prevent creation of hyperlinks in PDF?
3
MS Word: preserve hyperlinks when exporting to PDF
2
How do I format all hyperlinks in a Word document?
1
I would like to hyperlink several headings with different styles to the TOC without the style changing?
0
Linking Specific Header Layout to TOC
0
Table of contents formatting in MS word