How to I create an Outlook 2010 search folder to show all sent messages?

In the case of Outlook 2010 talking to Exchange, the "Sent Items" folder is an actual folder in that if you move a message out of that folder, it disappears from "Sent Items". In contrast the Lotus Notes behavior is that "Sent" is a logical view (like an Outlook Search Folder) so when you "move" items elsewhere they still show up in Sent, but really the one in Sent is a pointer to the one in the folder where you moved it. So in Notes the Sent folder is a listing of ALL sent emails (assuming the messages hasn't been deleted obviously), regardless of if the message has been moved.

How do I achieve the same effect in Outlook 2010 with Search Folders? I've tried this 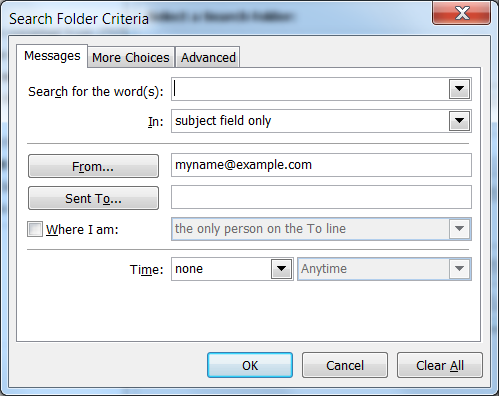 and the result is not only do I not see some emails sent by me, but also I see emails that were originally sent by me AND the replies to those emails. I suspect that since the reply has a 'from me' in there (since I originally sent it), that it includes that email in the view. 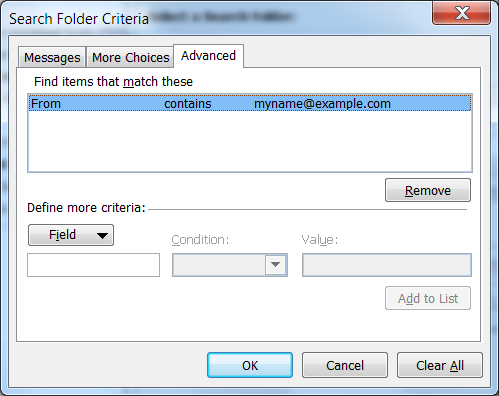 with the same result.

I just tried this but used the template "Mail from specific people" and it seems to achieve the result you were looking for. I too started out looking at a custom search folder but the template seems to implement the correct logic.

Not the answer you're looking for? Browse other questions tagged microsoft-outlook-2010 or ask your own question.

30
How do I view raw email headers in Outlook 2010?
1
Saving sent emails in Outlook 2010 not working for Pop3
0
Outlook Messages are invisible, but viewable via search
1
Outlook 2010: Can I search Only My: Inbox, All Inbox Subfolders, and Specified Archive File Folders all at once
4
Marking automatically moved to folders (using rules) messages as Unread in Outlook 2010
9
How to display in the reading pane the most recent email, sent or not, of a conversation when clicking a conversation in the Outlook 2010 inbox?
0
How to create a rule in Outlook 2010 to move all emails from an IMAP sent folder to local sent folder
1
Does Outlook autoarchive delete sent messages?